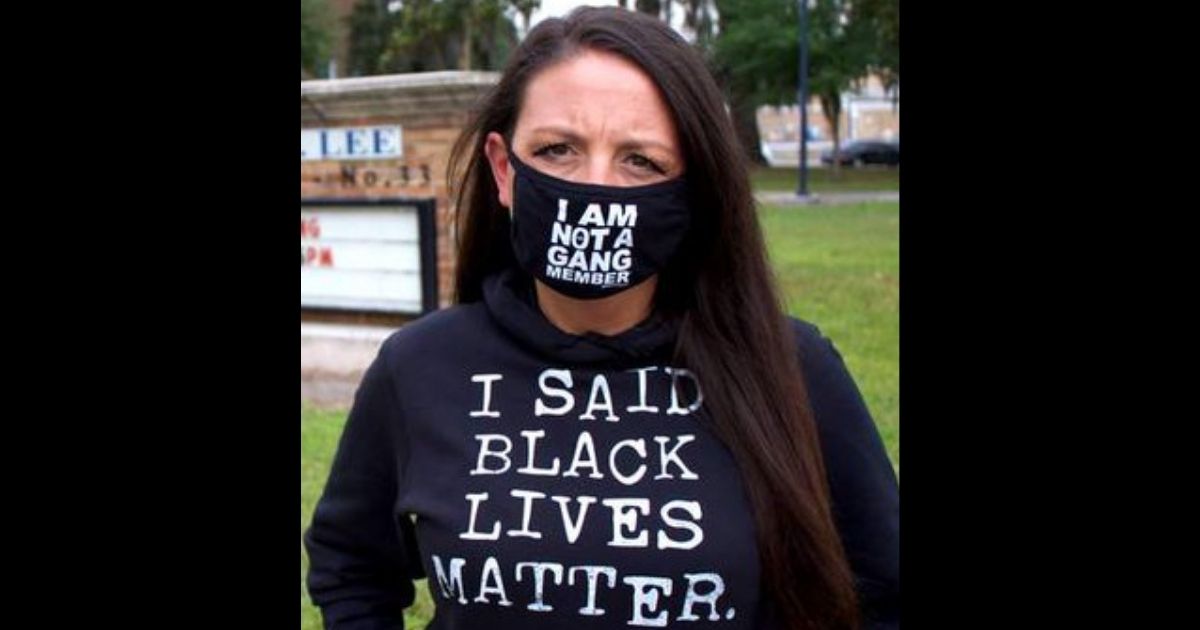 The following article, Teacher Disciplined for Hanging BLM Flag, Scores Six Years' Worth of Salary in Settlement, was first published on Flag And Cross.

For left-wing race baiters, Black Lives Matter is the grift that keeps on giving.

And you don’t even have to be black to profit from race-hustling white guilt today. Just look at Shaun King and Robin DiAngelo.

The latest example is Amy Donofrio, a high school teacher who scored a $300,000 settlement after suing the Duval County Public Schools in Jacksonville, Florida, for not allowing her to fly a Black Lives Matter flag over the doorway to her classroom.

In her April 16 civil lawsuit, she claimed she was unfairly removed from her teaching position in March for refusing to take down a BLM flag from her doorway at Riverside High School.

“After she refused, the district temporarily reassigned her to warehouse operations and said she was being investigated for ‘several matters,'” according to USA Today.

For the record, the superintendent of the Duval County Public Schools is a black woman, Diana Greene.

On Aug. 3, the school board voted to settle the lawsuit, citing the desire to avoid a long, expensive legal battle that local taxpayers would be forced to bankroll.

“Given the facts of the case, even though we know we haven’t done anything wrong, these are taxpayer dollars and I just can’t support paying those kinds of dollars over a three-to-five-year period on a case we could settle tonight,” board member Warren Jones said, according to WJXT-TV.

Attorney Stephen Busey, who represented the district, had estimated that it would take three to five years for the case to move through the court system, WJXT reported.

“We estimated for the Board somewhere between $1 million and $2 million at the trial level,” Busey said. “And beyond that, it could be $2 million to $3 million if you took it all the way to the United States Supreme Court, which is a possibility.”

Using this cost-benefit analysis, the school district decided to settle the lawsuit to resolve the matter sooner rather than later.

Under the settlement, Donofrio cannot apply for re-employment with the Duval County schools. For its part, the district agreed to drop its investigation of her.

Donofrio, a “language arts teacher,” was able to secure the hefty settlement after the Southern Poverty Law Center, a leftist advocacy group, intervened on her behalf.

This is the latest example of how race hustling has become a lucrative grift.

According to ZipRecruiter, the average annual salary for a “language arts teacher” in Jacksonville is $35,290. So Donofrio scored a legal settlement that was almost nine times her yearly salary.

How? By complaining that she wasn’t allowed to fly a flag that celebrates Black Lives Matter, an anti-police, anti-white, anti-American Marxist group that was responsible for more than a year of riots across the country.

This is the sad state of America today with Democrats controlling the White House and the House of Representatives. The one positive from Donofrio’s settlement is that she won’t be allowed to teach in the school district she sued.

Unfortunately, the majority of American public schools are already infested with toxic left-wing ideology, so she surely won’t be unemployed for long.