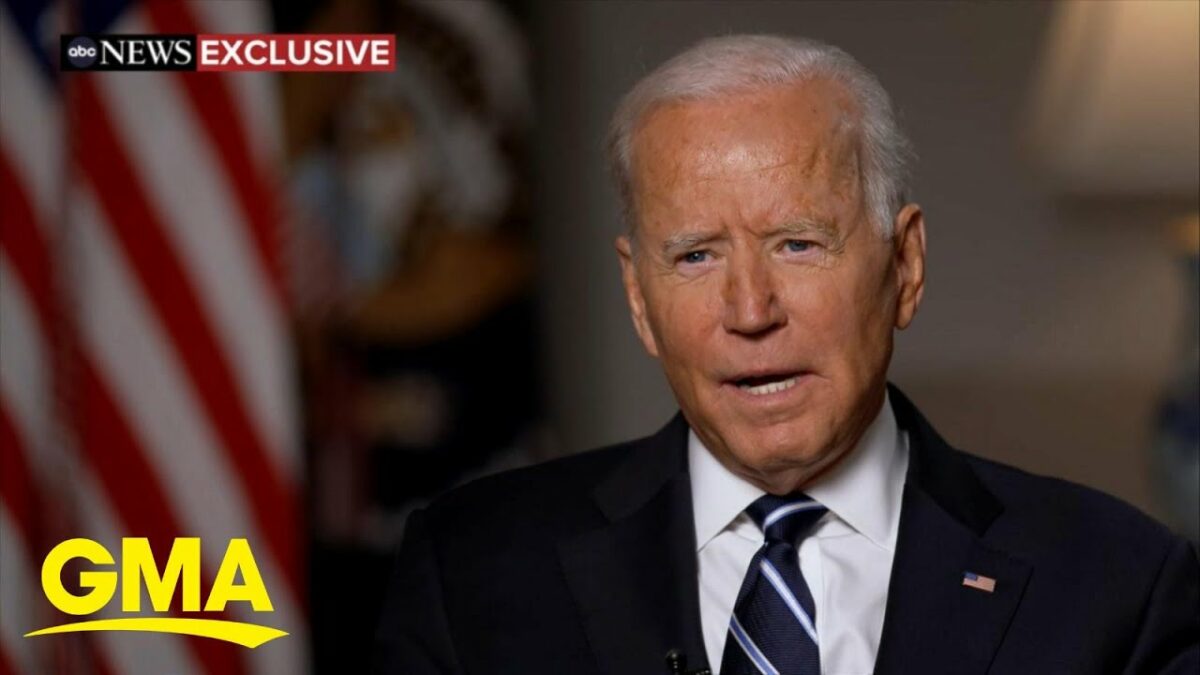 The following article, Biden Falsely Claims 'No One Is Being Killed' in Afghanistan, Makes Most Flippant Hand Gesture – Knocks on Wood, was first published on Flag And Cross.

President Joe Biden is struggling with the proper messaging regarding the disastrous U.S. pullout and Taliban takeover in Afghanistan, and one of his latest claims is downright false.

In an interview with ABC News’ George Stephanopoulos on Wednesday, the president suggested there were no deaths during the chaotic withdrawal.

“There’s still a lot of pandemonium outside the airport” in Kabul, Stephanopoulos pointed out.

“Well there is, but look, but no one’s being killed right now,” Biden said.

“God forgive me if I’m wrong about that,” he said, “but no one’s being killed right now.”

And with his typical faux-folksy attitude, Biden then knocked on the small wooden table next to him.

The commander-in-chief is either completely clueless or intentionally lying to the American people.

At least 12 people at the Hamid Karzai International Airport in Kabul have died since the Taliban takeover began, Reuters reported.

The U.S. Air Force is investigating one specific incident where Afghan civilians died after reportedly falling out of a C-17, along with “human remains” found in the landing gear of another C-17 after it arrived at an American military base in Qatar, Politico reported.

“OSI’s review will be thorough to ensure we obtain the facts regarding this tragic incident. Our hearts go out to the families of the deceased,” the Air Force’s Air Mobility Command said, referring to the service’s Office of Special Investigations.

That is just the airport. There is certainly carnage occurring elsewhere throughout the country.

The interview with Biden had other troubling issues as well, including the fact that he did not take any responsibility.

“No,” the president said when asked if the withdrawal could have been done better.

EXCLUSIVE: Pressed on whether the U.S.’s exit from Afghanistan could have been handled better, Pres. Biden tells @GStephanopoulos, “The idea that somehow, there’s a way to have gotten out without chaos ensuing—I don’t know how that happens.” https://t.co/mH1AyWI5lb pic.twitter.com/osAwdDQy2L

“I don’t think it could’ve been handled in a way that — we’re going to go back in hindsight and look, but the idea that somehow there was a way to have gotten out without chaos ensuing, I don’t know how that happens,” he added.

The president will blame anybody except himself, but the harsh reality is that his rhetoric will not change anything.

Afghan civilians, including women and children, are now subject to the cruel restrictions of the Taliban. Innocent people will undoubtedly die in the process.

Continue reading: Biden Falsely Claims 'No One Is Being Killed' in Afghanistan, Makes Most Flippant Hand Gesture – Knocks on Wood ...

Sadly, the DUMBEST MAN IN WASHINGTON, DC (for occasional very short visits, when not resting or vacationing in Delaware or Camp David), Joe Biden is OBLIVIOUS to REALITY and the REJECTION of his reckless EXIT of Afghanistan by the majority of American citizens and our allies over his MISERABLY PLANNED?? and EXECUTED RETREAT, EXIT, DEFEAT, CAPITULATION of Afghanistan, leaving Americans and Afghanistanies that supported the U.S. to get the the ONLY airport Biden left open, ON THEIR OWN, depending on the Taliban fighters who completely encircle that airport to allow them access to the airport and we “MIGHT” give them… Read more »

Lying is a Democrat rèsumè enhancement and Quid Pro Joe has been at it a long time.

That dementia-addled pedo couldn’t tell the truth if his life depended on it.

His ignorance, his blindness and his appalling lack of any remorse or acceptance of blame or guilt is just shocking and sickening.

The death of every person in that country, for months, will be on his head.

And if Trump had done this? The media and every politician on the Left would be screaming for his blood. Same actions, same results…and they’d be calling him every name in the book, and making up more.

They disgusting hypocrisy of these people is pure evil.

I hope all you people, including you dead ones, that voted for this senile old fool are proud of your vote. The only silver lining is the enhanced prospects of the Repubs winning in a landslide in 2022 and 2024.

Do not call him the commander in chief. He is a fascist usurper, placed in office because of a coup detat conducted without a single shot fired. China, illegals, the dead, dems, and dominion put him into office illegally.