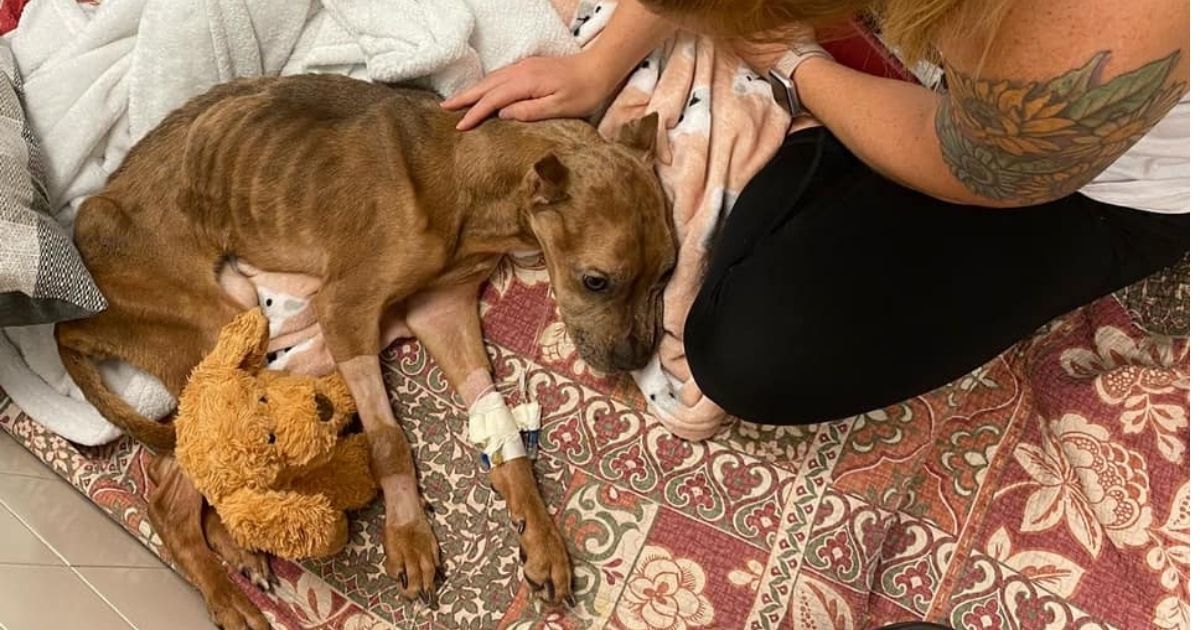 The following article, Abused Dog Found Starving and Battling Infection Now Fighting for Her Life in the ICU, was first published on Flag And Cross.

When Khaleesi first came to Mutty Paws Rescue in West Palm Beach, Florida, rescuers were shocked by her appearance.

The poor dog had been found on the streets in Lehigh Acres and picked up by someone who knew she needed immediate help.

“The magnitude of neglect is hard to grasp,” Mutty Paws posted on Facebook on Aug. 11.

“Deprived of food and love! We are utterly speechless and have been brought to our knees over today’s rescue and many tears were cried. We are hurt, angry and devastated. This is the absolute worst condition we have ever rescued a dog in.”

Khaleesi should have weighed at least 50 pounds, but by the time she started receiving care, she was just 19.5 pounds — nothing but skin and bones.

“Our amazing team rushed to rescue her after seeing her critically devastating state and knowing how gravely ill she is, our amazing doctor has stayed after hours to work on her,” Mutty Paws said.

“Fluids have been started immediately. She is beyond critical and we don’t know if she will pull through the pure neglect she has endured for who knows how long but we are going to give her every single ounce we’ve got and we desperately need our village.”

Dogs don’t get to Khaleesi’s state overnight. In her case, there had clearly been prolonged abuse.

According to WINK-TV, the Lee County Sheriff’s Office is on the case, and there’s a $1,750 reward for information leading to the person responsible for this crime.

Since being rescued, Khaleesi has had her ups and downs.

As of Wednesday morning, she had been in the ICU for 36 hours. Her condition hadn’t worsened, but it hadn’t gotten much better either. Still, rescuers are hoping her fighting spirit will be enough to get her through.

“She is being fed small amounts every 4 hours to allow her body to adjust and learn how to take in nutrients again,” Mutty Paws posted in an update.

“It is believed she was starved for 3-4 months given her condition. She is on medications to help with the acidity in her stomach which could potentially cause ulcers or other GI distress. She is able to pick her head up now and once placed in a standing position can stand, but cannot walk yet.

“Khaleesi is showing us how much she wants to survive this by how strong her fight is.

“We still need your help to continue praying for her, sharing her story, donating for her intensive medical care, and be her voice.”