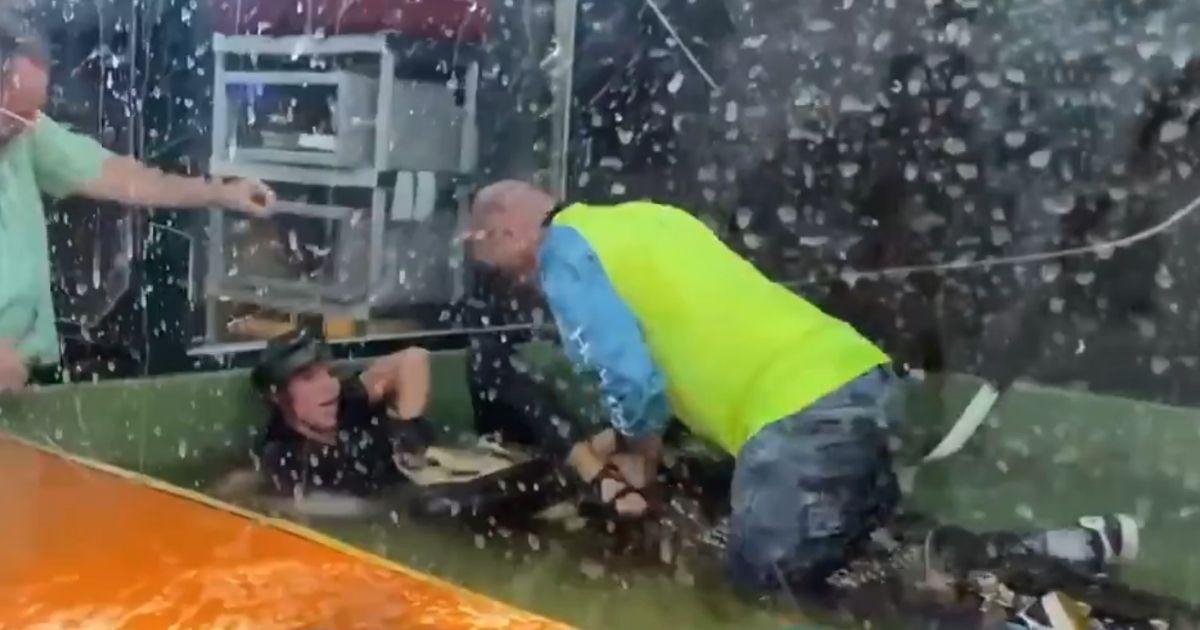 The following article, Video: Child's Birthday Party Goes South When Alligator Drags Handler Into Tank, Bites Down on Her Hand, was first published on Flag And Cross.

There are all sorts of interesting places to hold kids’ birthday parties, and more exotic options that many parents have availed themselves of are small zoos or reptile exhibits and stores.

There’s something about those dinosaur-like creatures that strikes awe into the hearts of young boys and girls, and for good reason — there’s literal danger involved.

One group of kids got a taste of that when the featured American alligator got a taste of its handler. Thanks to a brave father attending the party, though, a taste is all the scaled creature got.

The incident took place at Scales and Tails in West Valley City, Utah, on Saturday. As kids and parents gathered around the alligator enclosure to watch the handler, 31-year-old Lindsay Bull, interact with the 8.5-foot-long “Darth Gator,” the alligator clamped down on Bull’s hand. She later told NBC News that at first it didn’t seem that bad, but then the alligator “really bit down.”

At first the kids watched, seemingly unconcerned, as if it were all part of the show. One dad — recently married Donnie Wiseman, 48 — quickly realized that real trouble was brewing, and started yelling, “Hey, we got trouble here!”

In a dramatic rescue caught on tape, a bystander jumped in to help when a large alligator attacked its handler during a birthday party in Utah. @KerryNBC reports. pic.twitter.com/Lidv3bKhTl

As they waited for the alligator to let go, Wiseman kept Bull talking and asked what he needed to know. Both stayed surprisingly calm throughout the ordeal, something that no doubt helped with the positive outcome.

The alligator released Bull’s hand and another man helped pull her out. Then she coached Wiseman, who was still holding the reptile down, and he managed to get out unscathed other than bumps and bruises.

Another partygoing parent with a medical background assisted Bull until EMTs arrived.

“We want to send a huge shoutout to Donnie Wiseman and Todd & Amy Christopher!” Scales and Tails posted the following day. “We want to thank them for their heroism. Working with some of these animals has inherent risks that we as the staff accept.

“Yesterday, the sort of event that we hope never happens happened. One of our gator handlers got bitten by our large alligator and things took a bad turn. These gentleman could have stayed in the safety zone as most of us would, but instead jumped into the situation, of their own volition, and helped secure the alligator. Their help, combined with the training of our staff member, probably saved her life and her limbs.

“Mrs. Christopher had a nursing background and started first aid prior to the EMT’s arrival and we thank her for that as well. Our staff member is doing well and is in recovery.”

On Monday, the page shared an update on Bull, who said she was recovering well and should make a complete recovery.

“I got lucky to land in a hospital that employs what has to be the best orthopedic surgeon in Utah,” she said. “He was able to improvise and come up with a solution that should result in full use of my hand. I can’t explain the level of admiration I have for that man.

“I’m being treated aggressively with antibiotics, which I’m thankful the Infectious Disease staff here were prepared to do. Lastly, I’ve had the most wonderful nursing staff that have made me feel safe and comfortable since I got here. I definitely want to thank everyone that has reached out and for doing so, as well; it’s made recovery feel so much more manageable! Thank you!”

Wiseman is being hailed as a hero, for obvious reasons. Not many people would jump into an alligator tank to help someone else.

“Once I knew things were under control and EMTs were coming, I went out and smoked a cigarette, honestly,” the hero told KUTV-TV.

Scales and Tails also said that Darth Gator is fine and is in no danger of being “removed.” The entertainment service also said it has been planning a larger enclosure for him as he’s experienced a growth spurt in the last year.

The kids at the birthday party certainly have a better understanding now of just how powerful and dangerous these creatures can be. As for Wiseman, he plans to go back to see the handler and more of the large reptiles.

“I’ll come visit again I loved that place,” he wrote on Scales and Tails’ post. “p.s I would really like to still hold that anaconda if she would assist me when she is well.”