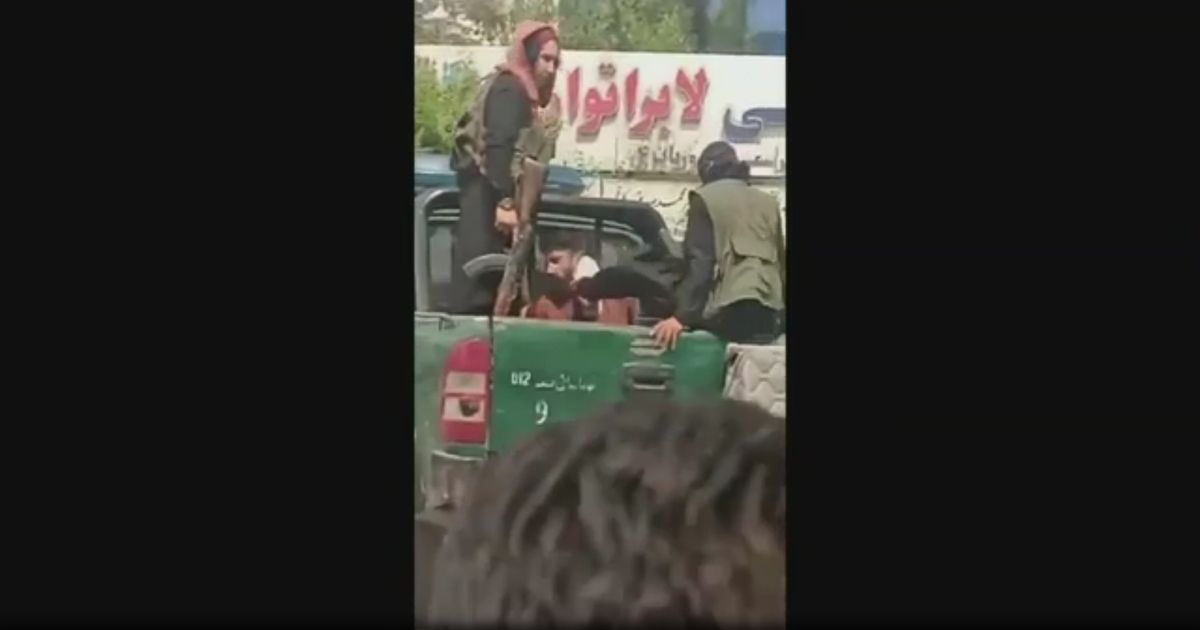 Disturbing video from Kabul shows Taliban fighters beating Afghans trying to make their way to the airport, according to a former contract employee who worked for the United States.

The Afghan man, who was a State Department contractor, told Fox News the Taliban has set up checkpoints throughout the capital city looking for those who were employed by the U.S.

They are also going through neighborhoods looking for them and asking neighbors about them.

Video obtained by Fox reportedly shows Taliban fighters kicking a man in the face in the back of a pickup truck, and in other footage, people can be seen being whipped as they walk by.

The former contractor recounted that outside of the Kabul airport, “The Taliban [were] beating people and the people were jumping from the fence, the concertina wire, and also the wall.”

He estimated that 10,000 or more were trying to make their way to the airport on Monday.

Other footage shows a chaotic scene as people who appear to be Taliban fighters fire gunshots in crowds outside of the airport.

“Flights were temporarily suspended from Kabul International Airport on Monday as U.S. forces attempted to gain control of the crowd of Afghans desperate to leave the country,” Fox reported.

WOW — look at the scene outside of the Kabul airport! Keep in mind there are still an estimated 10,000 Americans in Afghanistan (WaPo)… https://t.co/VCEVOh1w0w

Flights resumed on Tuesday, according to the news outlet.

People hanging on to plane at Kabul airport pic.twitter.com/TSoiI2tuHC

Fox News correspondent Rich Edson reported that the Department of Defense estimates it will be able to soon airlift between 5,000 and 10,000 people out per day.

State Department spokesman Ned Price said Monday that the situation in Afghanistan is “evolving quickly,” and the department is advising American citizens to shelter in place and not try to travel to the airport until instructed otherwise.

Former US contractor in Kabul: Taliban beating people on the way to the airport, going through neighborhoods looking for those who worked with the US. pic.twitter.com/WOIAhDPcW2

“The Taliban have informed us that they are prepared to provide the safe passage of civilians to the airport and we intend to hold them to that commitment,” National Security Advisor Jake Sullivan told reporters at the White House Tuesday.

JAKE SULLIVAN: “The Taliban have informed us that they are prepared to provide the safe passage of civilians to the airport and we intend to hold them to that commitment. … We believe this can go until the 31st. We are talking to them about what the exact timetable is” pic.twitter.com/QtQtcHXs3Q

Based on the beatings, that pledge might not be one you can take to the bank.

Former CIA director and four-star general David Petreaus contended Tuesday that the U.S. will have to take a strong stand against the Taliban to ensure safe passage happens.

“They don’t want to get into a fight with us right now, I don’t think,” Petraeus continued. “They’ve achieved what they sought. So why would they invite the United States military might on them at a moment when all they need to do is sit in the presidential palace and issue social media and video dispatches?”

He called it a “Dunkirk moment” for the U.S., referencing the British evacuation from France in the face of Adolf Hitler’s advancing forces during World War II.

All the resources necessary must be marshaled to safely get Americans, Afghan interpreters and others who worked with our military out.

The Biden administration has screwed up the withdrawal to date. Let’s pray they don’t screw up the rescue.