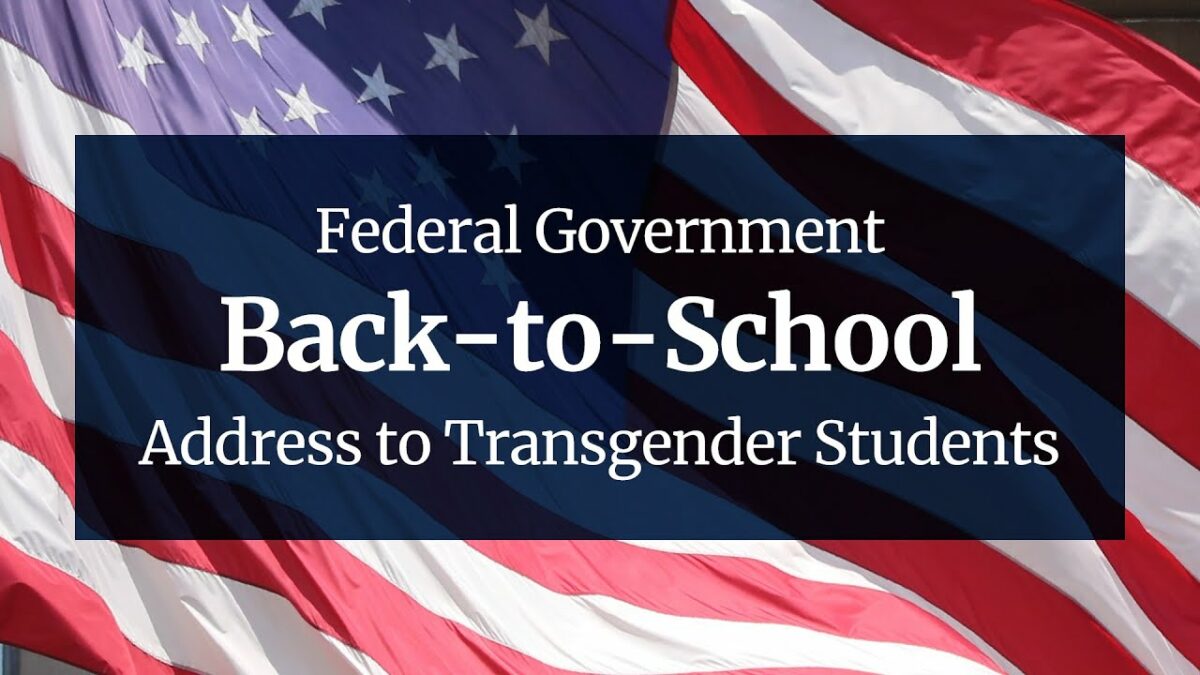 The Biden administration wants transgender students to know that an army of government lawyers is ready and willing to sue schools on their behalf.

In a so-called “Back to School” video issued by the Department of Justice on Tuesday, Biden administration officials told transgender students that they are ready to fight all those bad people who might enact rules and laws they don’t like.

Several states have passed laws to require transgender students to participate in sports or use school facilities based on their sex. Such laws are designed to ensure girls compete against other girls on a level playing field and have privacy from boys in bathrooms and locker rooms.

Kristen Clarke, the DOJ’s assistant attorney general for civil rights, told transgender students that unlike people in their hometowns, the feds are on their side and will fight what she described as “discrimination.”

“In some places, people in positions of authority are putting up obstacles that would keep you from playing on the sports field, accessing the bathroom and receiving the supportive and life-saving care you may need. We’re here to say that’s wrong and it’s against the law,” she said.

Suzanne Goldberg, acting assistant secretary for civil rights in the Department of Education, said that her department “and the entire federal government stand behind you.”

And in case that was not clear, Clarke spelled it out.

“The Department of Justice is here, along with the Department of Education, to investigate complaints about discrimination or harassment based on sexual orientation or gender identity. We want you to know that we are looking out for you, and we’re here to protect your civil rights,” she said.

Clarke told students in two states that they really matter more than most, giving a website address where they can file complaints.

“Discrimination will not be accepted on our watch,” she said.

Biden admin pledges to crack down on schools that don’t allow trans athletes in girls’ sports https://t.co/0pVI5N9MkK #FoxNewsWes
You people are TOO sex obsessed. What about girls’ rights, which you are taking away by allowing transgender in sports, etc. Get on with academics!!!

“Right now were are fighting against laws that try to ban transgender athletes in West Virginia and deny health care for transgender young people in Arkansas, and recently federal courts in both states have blocked those laws from being applied,” Clarke said.

Assistant Secretary for Health Rachel Levine, a man who identifies as a woman, said transgender students should know they matter to the president.

“President Biden sent an unequivocal message to the transgender community. ‘To all transgender Americans watching from home, especially the young people, I want you to know your president has your back,'” Levine said. “Well, I want all of you to know that I have your back too.”

Government guidance aimed at making schools more inclusive for transgender children should be withdrawn because it includes “irresponsible” and “incredibly unsound” data, a former senior civil servant has said https://t.co/4p00ROZxZo

However, Roger Severino, a senior fellow at the Ethics and Public Policy Center in Washington, said the video is “pushing unscientific ideologies.”

“Back to school messages should be about seeking and learning truth, not pushing unscientific ideologies that hurt children and take away parents’ rights,” Severino told Fox News in an email.

“School kids struggling with their male or female bodies should be treated with compassion and respect without forcing doctors to provide sterilizing surgeries and hormones or allowing biological boys to compete against and shower with girls, but that is exactly what the Biden Administration is requiring,” he said.

To the Biden crew: a day without crapping on America is a wasted day.