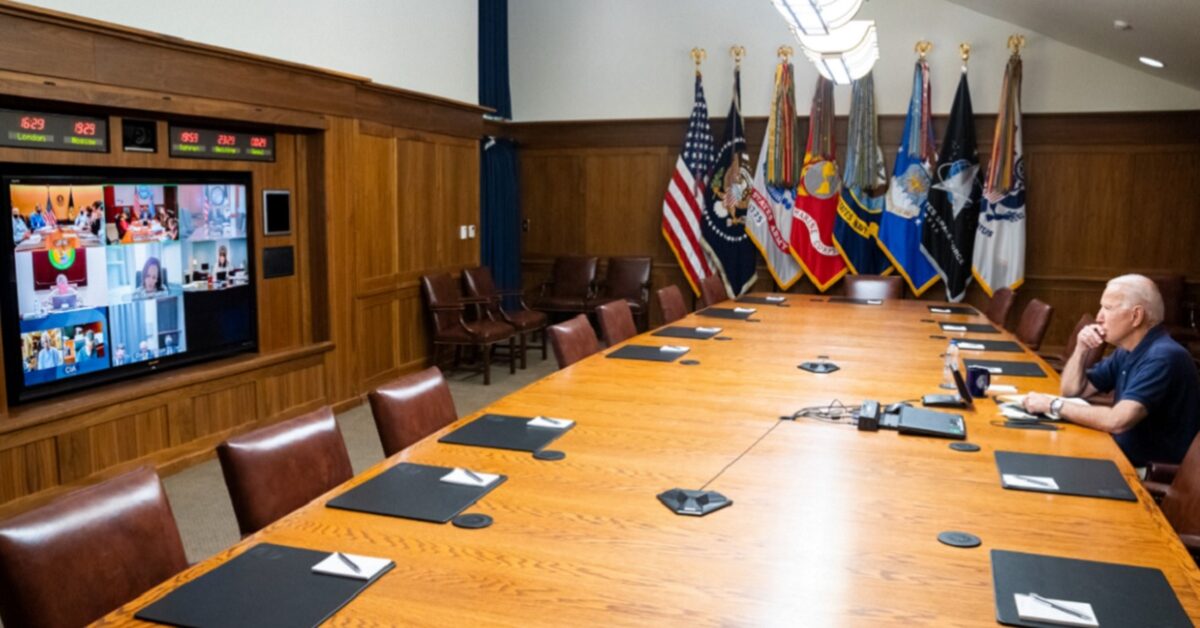 On Saturday and Sunday, as the government of Afghanistan fell to the Taliban and the United States military began a chaotic, poorly planned retreat from Kabul, President Joe Biden wasn’t at the White House. Instead, he was at the presidential retreat Camp David in Maryland.

Some slammed Biden for not returning to Washington amid the crisis, but the White House tried to assure us he was doing his job via photos posted to Twitter of video meetings he was holding with his intelligence officials.

On Saturday, before the situation in Afghanistan became the only issue on the agenda, the White House Twitter account said the president was keeping abreast of events in the Middle East and in the Caribbean.

On Sunday, as the Taliban were rapidly closing in on Kabul and were about to take the capital, the White House’s Twitter update focused solely on that.

“This morning, the President and Vice President met with their national security team and senior officials to hear updates on the draw down of our civilian personnel in Afghanistan, evacuations of [Special Immigrant Visa] applicants and other Afghan allies, and the ongoing security situation in Kabul,” the tweet stated.

This morning, the President and Vice President met with their national security team and senior officials to hear updates on the draw down of our civilian personnel in Afghanistan, evacuations of SIV applicants and other Afghan allies, and the ongoing security situation in Kabul. pic.twitter.com/U7IpK3Hyj8

The obvious question was why this wasn’t being taken at the White House — where, if a country where we’ve had a military presence for two decades, one would hope the president would be.

However, former President Donald Trump’s acting Director of National Intelligence Richard Grenell noticed something else problematic about the photo posted on Sunday. A close look shows the two images at the bottom of the screen Biden is viewing are marked “CIA” and “Doha Station.”

He wasn’t the only one to notice it, either:

Heck of a job, White House communications shop. I figure you would want to crop out the teleconference screens labeled “CIA” and “Doha Station.” You panicking amateur idiots. https://t.co/ZFoICYYVwO

Did you just dox a bunch of CIA analysts?

Another entity that noticed it, rather unpleasantly, was the Iranian state propaganda outlet Fars News.

“The official White House Twitter account posted a photo on Sunday of Biden meeting by video conference with intelligence officials to hear updates on the drawdown of civilian personnel, ‘the ongoing security situation in Kabul’, and evacuations of Afghan allies, including interpreters who helped US and NATO forces during the 20-year war,” Fars News noted.

“The picture showed other meeting participants on a large screen, including CIA officials and three men at the ‘Doha Station’, RT reported.”

Yes, that’s a reference to the Russian propaganda outlet RT outlet, which also ran a piece on the tweet — although its coverage seized on a minor-key conspiracy theory that the photo was an old one, given it showed London and Moscow as being three hours apart, not two as they are now, after the U.K. moved its clocks forward in March for Daylight Saving Time.

Real question. Why is Moscow time wrong in this photo?

Time difference between London and Moscow is only 2 hours, it hasn’t been 3 hours since March… https://t.co/26zlia2b2k

The answer to that, according to the U.K. Independent, is likely that the American military and NATO use a system of timekeeping called Zulu, in which hours don’t change for daylight savings.

However, the fact that Fars News and RT — both poisonous sources of state-sponsored disinformation from two of our enemies — are reporting on a White House tweet is not good news for the Biden administration.

Did this improperly “out” intelligence officials who were working on Afghanistan? Even if it didn’t, it was a mistake to even open that door. Why did the world need to know who was on a secure link with President Biden while he was at Camp David?

(Fars News quoted one Twitter user asking: “Umm, is the public supposed to see the faces of the CIA agents? Are we supposed to know there is a Doha Station?”)

Was Biden’s publicity team simply trying to prove to the world that he was “working hard” even though he didn’t return to Washington from Camp David until Monday — and then promptly left again for Camp David after he gave his speech, according to Fox News?

This weekend was devastating enough for the prestige and diplomatic power of the United States.

We didn’t need the Twitter account of the White House compounding the miseries being felt in Kabul and across Afghanistan, all in a vain attempt to prove Biden wasn’t just on vacation.

What he may be thinking ….
“Hmm, I wonder what flavor ice cream I should have?”
“Oh wait, who am I?”