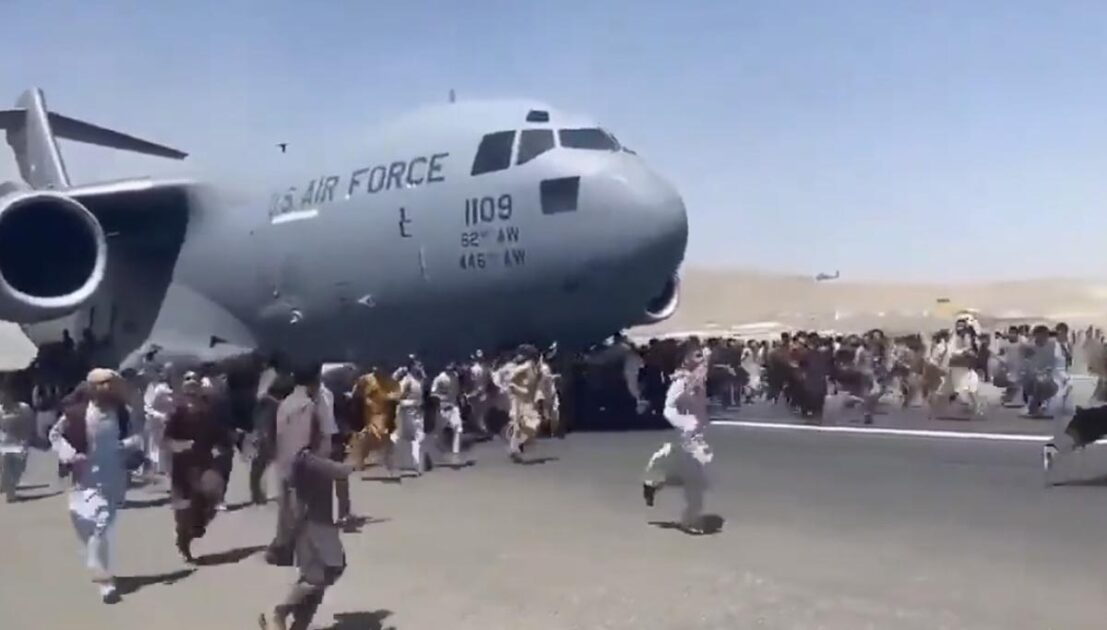 The following article, Afghanis Fall to Their Deaths after Desperately Hanging Onto Fleeing U.S. Aircraft Ahead of Taliban Invasion, was first published on Flag And Cross.

Terrified Afghani citizens were seen desperately trying to force their way onto fleeing U.S. aircraft and at least three even fell to their deaths after hanging onto planes that had already taken off.

Video of Kabul International Airport on Monday shows hundreds of Afghans surrounding American C130 planes and attempting to get inside or hang onto the craft as it takes off so they can escape the terrorist army headed toward Kabul.

Video seems to show several people falling off a plane that had reached several hundred feet in altitude:

Video on social media shows people falling to their deaths from an aircraft that had taken off from Kabul airport, presumably having attached themselves from the outside. pic.twitter.com/9KHeiuawXj

This is probably following this incident #Kabul pic.twitter.com/tVQSjXJ9v9

Chaos erupted at the airport on Monday. It got so bad that U.S. soldiers had to fire on one dangerous crowd. At least two Afghans were shot in the incident, the Daily Mail reports.

#Afghanistan: Things are so out of control at Kabul airport that two apaches are clearing the runway. pic.twitter.com/lQGwNSyXaA

According to the United Nations, the Taliban has already started a campaign of targeted killings.

“The Taliban has taken control of Afghanistan and are going door to door in Kabul looking for enemies to kill despite promising the international community they wouldn’t breach human rights because they wanted to be formally recognized,” the Mail reported Monday.

Continue reading: Afghanis Fall to Their Deaths after Desperately Hanging Onto Fleeing U.S. Aircraft Ahead of Taliban Invasion ...