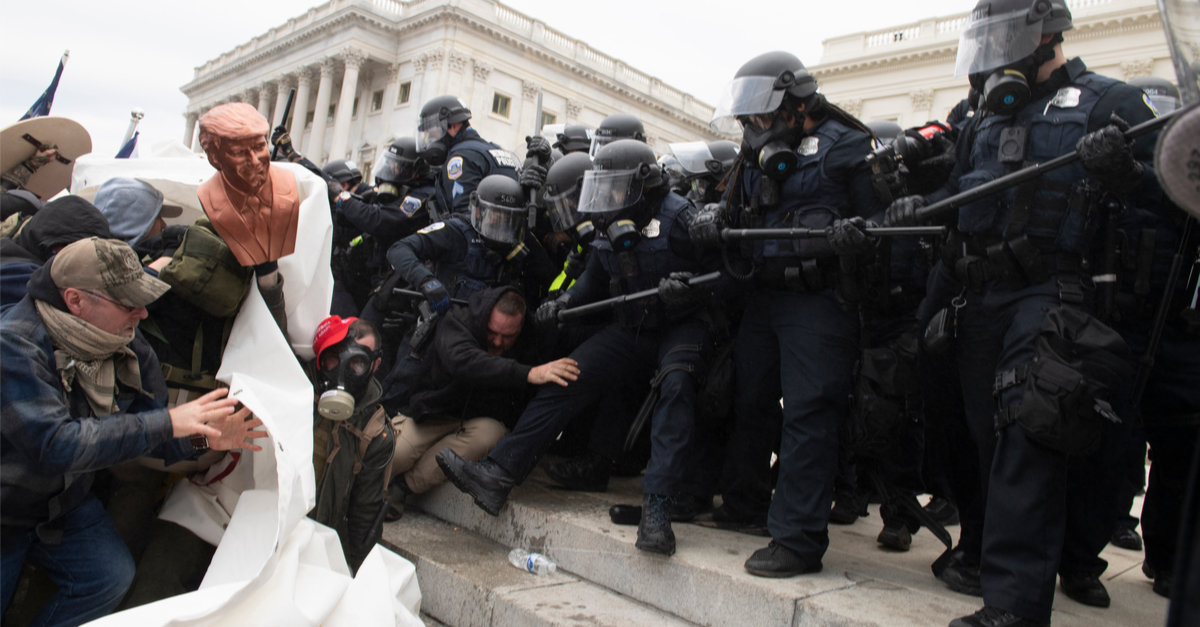 The following article, Insurrectionists Face Civil Suit in Suicide of Bludgeoned Police Officer, was first published on Flag And Cross.

On January 6th, 2021, the American people found themselves stunned in ways that they had not been before in their lifetimes.

That’s because, for the first time in the history of our nation, Americans overran the US Capitol, breaching the building and storming into the inner sanctum, chanting “hang Mike Pence”.

Many on the scene that day stated their purpose to be the disruption of the certification of the electoral college’s 2020 results, and to send a message to the government that they would not be trifled with.  Many believed that Donald Trump had been elected once again, but that the election had been stolen from him via some nefarious means.

So, when they stormed the Capitol, they were angry.  This meant that anything that got in their way was going to face their rage – police officers included.

This has now led to a number of the Capitol rioters being sued by the widow of one of these law enforcement agents.

Jeffrey Smith was an officer with the Metropolitan Police in Washington, DC. He was attacked by rioters while defending the US Capitol from attack on Jan. 6, suffered a traumatic brain injury and, the day after he was sent back to work, shot and killed himself. A lawyer representing his widow, Erin, has filed a lawsuit against two men identified as Smith’s attackers. David Weber, Erin Smith’s attorney, said a group of people called the Deep State Dogs figured out who injured Smith using images posted online, the Washington Post reports.

The widow Smith is seeking a declaration that her husband’s death occurred “in the line of duty”.

The FBI is currently dealing with hundreds of cases from the events of January 6th, with even more arrests to come as the would-be insurrectionists continue to be identified online.

West, must you always be an asshole? Whatever happened to unbiased reporting? You certainly don’t practice it. CNN is looking for ignorant trash like yourself. Have you sent in your application yet?

Did President Trump steal your dolly, or do you hate him for some other ridiculous reason? Did he have anything to do with you getting turned down for gender reassignment surgery? Get a life, little man.