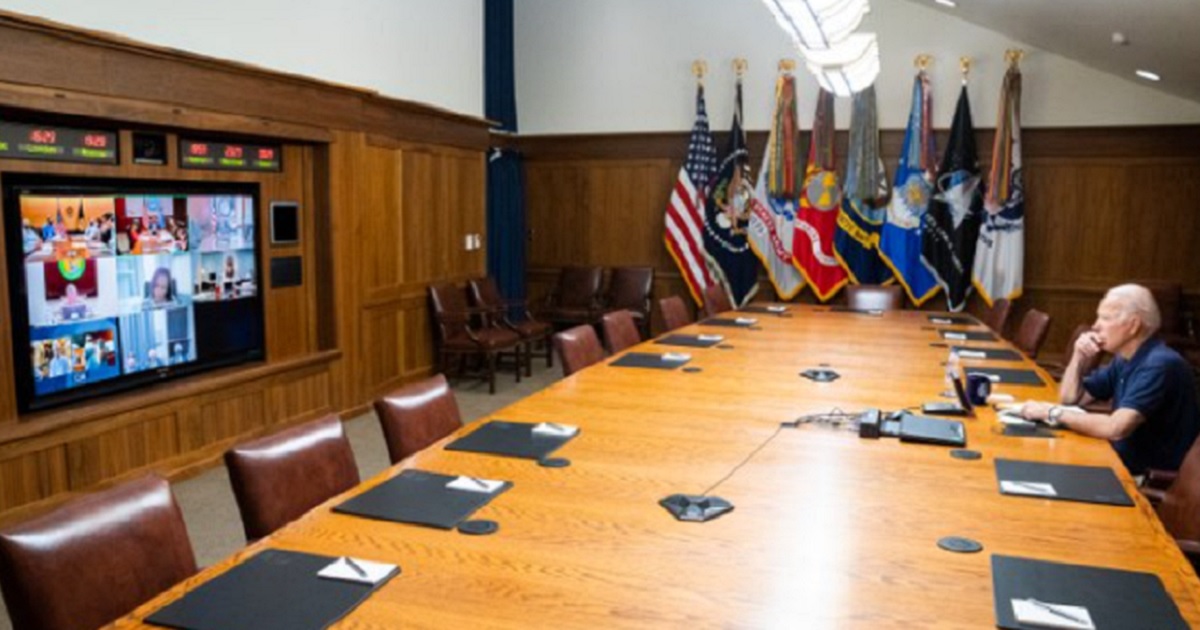 The following article, Biden Seen Alone at Presidential Retreat as Thousands of Americans Are Caught in the Fall of Kabul, was first published on Flag And Cross.

A little more than a month ago, President Joe Biden said he had faith the Afghan military could hold the Taliban at bay and that the fall of the country wasn’t inevitable. A little over a week ago, U.S. intelligence estimated that the Afghan capital of Kabul could hold out for three months.

On Saturday, Biden announced he was sending in 5,000 U.S. troops to evacuate American personnel and soldiers as well as Afghans who helped the United States during our time in Afghanistan.

On Sunday, Afghan President Ashraf Ghani fled the country, the Taliban moved into Kabul and declared the country the Islamic Emirate of Afghanistan — the old name for nation when the Taliban first controlled it between 1996 and 2001, according to The Associated Press.

As the fall of Afghanistan unfolded, Biden was at the Camp David presidential retreat in Maryland — and, as of Sunday night, planned to stay there through Wednesday, the AP reported.

However, Camp David is supposed to allow the president to stay on top of things remotely. A picture released by the White House during the disastrous weekend showed the president working hard “with the national security team to discuss the ongoing efforts to draw down our civilian footprint in Afghanistan.”

Photo released by the WH showing Biden alone at a conference table at Camp David does not project much confidence pic.twitter.com/q2dNI92Eui

It wasn’t reassuring either when the White House posted a similar photo on Sunday:

This morning, the President and Vice President met with their national security team and senior officials to hear updates on the draw down of our civilian personnel in Afghanistan, evacuations of SIV applicants and other Afghan allies, and the ongoing security situation in Kabul. pic.twitter.com/U7IpK3Hyj8

While the fall of Kabul was sudden — just a week prior, Reuters reported, U.S. intelligence thought the capital had at least three months before Taliban insurgents overtook it — it was clear from the time that Biden left for Camp David that the Taliban’s rush across Afghanistan was accelerating.

Joe Biden heads to Camp David until WEDNESDAY while the Taliban rampages through Afghanistan https://t.co/yfTE9EzV1u

As the U.K. Daily Mail reported, the Taliban took three major cities that day: Kandahar, Herat and Ghazni. The first is Afghanistan’s second-biggest city, the second a strategic point close to the Iranian border and the third is on a road south of Kabul.

At the time, with comparisons to the fall of South Vietnam’s capital in 1975 already being made, 3,000 U.S. troops were being sent to Afghanistan to aid in an evacuation and the State Department said it would be paring down its 4,000-member contingent in Kabul to what it called a “core diplomatic presence.”

On Saturday, while he was at Camp David, Biden released a statement in which he upped the number of troops involved in the evacuation to 5,000 “to make sure we can have an orderly and safe drawdown of U.S. personnel and other allied personnel, and an orderly and safe evacuation of Afghans who helped our troops during our mission and those at special risk from the Taliban advance.”

However, he made clear that he had no intention in intervening in any way to even stall the rapid takeover of the country by the Taliban.

“One more year, or five more years, of U.S. military presence would not have made a difference if the Afghan military cannot or will not hold its own country. And an endless American presence in the middle of another country’s civil conflict was not acceptable to me,” he said in the statement.

On Sunday, first Jalalabad fell. That was the last major population center except for Kabul not controlled by the Taliban. By the end of the day, the Taliban had eliminated that “except for Kabul” part and became the new government.

Joe Biden has been commander-in-chief for seven months – the current failure in Afghanistan falls squarely on his shoulders.

His lack of leadership during this pivotal moment has been shameful – it has only served to embolden our adversaries and let down our allies.

Why is Joe Biden in hiding? He should immediately address the nation and answer for the catastrophic situation in Afghanistan. Conference calls between cabinet secretaries and senators don’t cut it in a crisis.

No person who calls themselves the President of the United States should be on vacation while the world crumbles down around them.

The dereliction of duty continues…

On the conference call briefing for members of Congress with Biden officials. It’s clear the Biden administration was caught unprepared, didn’t anticipate this catastrophe and the President is hiding & asleep at the wheel.

America is in crisis.

And Joe Biden is on vacation. https://t.co/fCQzN4kyZu

America’s in crisis. Afghanistan’s in chaos.

For every liberal readying the “just because he’s at Camp David doesn’t mean he’s not on the job” defense, you may want to read this Sunday night tweet from Daily Caller White House correspondent Shelby Talcott:

President Biden has no public events scheduled tomorrow and will remain at Camp David, per the White House daily guidance.

Meanwhile, Americans caught in Kabul by the sudden downfall — up to 10,000, according to The New York Times — are apparently getting precious little help from the State Department and its embassy officials.

The country where we fought our longest war just fell in domino-like fashion and Biden still doesn’t plan any public events on Monday. That may change, but the fact his schedule is clear in the first place should tell you all you need to know.

Furthermore, if you want to argue the president is every bit as in control from Camp David as he is from the White House, then explain this, from Associated Press reporter Jonathan Lemire:

Discussions were underway for Biden to speak publicly on the deteriorating situation in Afghanistan.

Biden, who is scheduled to remain at Camp David through Wednesday, is expected to return to the White House if he decides to deliver an address. https://t.co/CmoGbUuVWz

Lemire and others from the AP reported Sunday night that “leading figures in the administration acknowledged they were caught off guard with the utter speed of the collapse of Afghan security forces. The challenge of that effort became clear after reports of sporadic gunfire at the Kabul airport prompted Americans to shelter as they awaited flights to safety after the U.S. Embassy was completely evacuated.”

The article noted that, “Discussions were underway for Biden to speak publicly, according to two senior administration officials who requested anonymity to discuss internal conversations. Biden, who is scheduled to remain at the presidential retreat through Wednesday, is expected to return to the White House if he decides to deliver an address.”

If the president could respond to the rapid and unexpected fall of Afghanistan to the Taliban just as effectively from Camp David as from the White House, why would he need to return to the White House if he decided to deliver remarks on the matter?

It didn’t take long for the events of this weekend to be compared to the fall of Saigon. Even the pictures looked identical.

On Sunday, however, those administration officials not on vacation were adamant the two situations weren’t analogous: “This is manifestly not Saigon,” Secretary of State Antony Blinken said, according to The Washington Post.

No, one supposes there were differences. For one, as the Post reported, then-President Gerald Ford was actually in the White House when Saigon fell.

Continue reading: Biden Seen Alone at Presidential Retreat as Thousands of Americans Are Caught in the Fall of Kabul ...