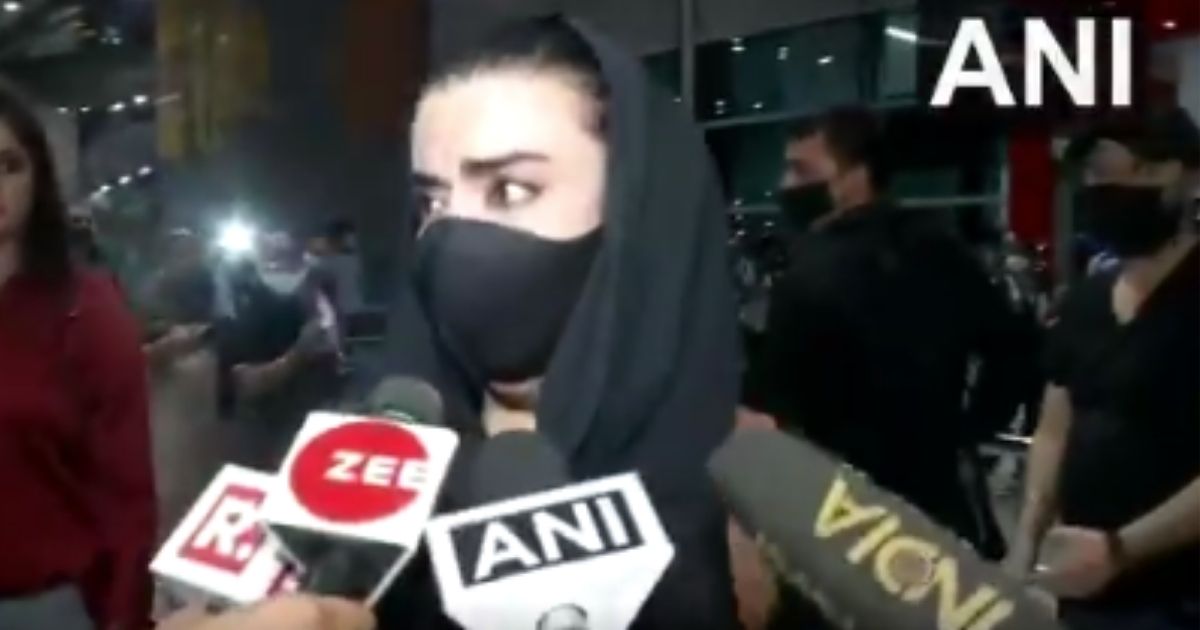 The following article, Afghan Woman Who Fled During the Fall Weeps, Reveals Horrors Biden Is Allowing to Happen, was first published on Flag And Cross.

On Sunday, the world watched in collective horror as the Taliban descended on the Afghan capital of Kabul and the last semblances of American control vanished in chaos — while personnel scrambled to evacuate.

There has been much discussion of President Joe Biden’s poorly managed withdrawal from the war-torn nation; however, for the Afghan people, this is much more than a humiliating political blunder.

It has a real, human cost, which will be paid by the most vulnerable of Afghanistan’s citizens — and it would not be out of line to place the blame, at least in large part, on Biden’s head for the suffering and abuses they’re already enduring.

While the future of Afghanistan may be uncertain, the fate that awaits women and girls under Taliban control is all too clear.

Their rights have vanished overnight.

“I can’t believe the world abandoned Afghanistan,” one woman, who had just been evacuated from Kabul, told a crowd of reporters that gathered around her upon arriving in Delhi, India.

“Our friends are going to get killed. They are going to kill us. Our women are not going to have any more rights,” she said, crying, before ending the interview.

#WATCH | “I can’t believe the world abandoned #Afghanistan. Our friends are going to get killed. They (Taliban) are going to kill us. Our women are not going to have any more rights,” says a woman who arrived in Delhi from Kabul pic.twitter.com/4mLiKFHApG

As the Taliban approached Kabul, students of a girls’ college were told they needed to evacuate, one unnamed resident wrote for The Guardian on Sunday.

“Go and put on your chadari [burqa],” the women were taunted by a man on the street, according to the woman.

“It is your last days of being out on the streets,” another allegedly chided, while a third man reportedly said, “I will marry four of you in one day.”

This is just a small taste of what is soon to become daily life for Afghanistan’s female population, and unfortunately, this has already begun to happen in the regions under Taliban control.

“I have nearly completed two simultaneous degrees from two of the best universities in Afghanistan. I should have graduated in November from the American University of Afghanistan and Kabul University, but this morning everything flashed before my eyes,” the Kabul resident continued.

“I worked for so many days and nights to become the person I am today, and this morning when I reached home, the very first thing my sisters and I did was hide our IDs, diplomas and certificates. It was devastating. Why should we hide the things that we should be proud of? In Afghanistan now we are not allowed to be known as the people we are.”

Many young women and girls in Afghanistan today have never known anything other than the rights guaranteed them by the government that the Taliban deposed on Sunday.

“The Taliban will regress freedom at all levels and that is what we are fighting against,” a spokesperson for the now-upended government told Reuters.

“Women and children are suffering the most and our forces are trying to save democracy. The world should understand and help us.”

There are many for whom this cry for help will be far too late.

According to France 24, there have been multiple reports circling over the last few weeks of Taliban fighters “going door-to-door, drafting lists of women and girls aged between 12 and 45 years who are then forced to marry Islamist fighters.”

Across Afghanistan, there are reports of girls’ schools being closed and women being forced out of their jobs by men.

“How can it be possible for me as a woman who has worked so hard and tried to learn and advance, to now have to hide myself and stay at home?” 26-year-old Zahra, who works for a nonprofit that works to raise awareness for women’s issues, told The Associated Press after she watched the Taliban fighters raise their flag over her hometown of Herat last week.

When the Taliban controlled Afghanistan prior to 2001, women were subject to the strict precepts of Sharia law.

The memory of the harsh treatment is still fresh in the minds of Afghans, even those who do not remember it themselves.

“My sisters and I could not sleep all night, remembering the stories my mother used to tell us about the Taliban era and the way they treated women,” The Guardian’s unnamed Kabul resident wrote.

“I did not expect that we would be deprived of all our basic rights again and travel back to 20 years ago. That after 20 years of fighting for our rights and freedom, we should be hunting for burqas and hiding our identity.”

Many prominent figures around the world noted this harsh and undeniable reality.

The President is to be commended for the clarity of purpose of his statement on Afghanistan and his action. The Taliban must know the world is watching its actions. We are concerned about reports regarding the Taliban’s brutal treatment of all Afghans, especially women and girls.

As the deeply concerning events unfold in #Afghanistan, the health and well-being of Afghan civilians, especially women and girls, is of utmost priority.https://t.co/C5p066J9OI

“No one cares about us. We’ll die slowly…” My heart is aching for the brave, beautiful women of Afghanistan. I feel helpless, I feel angry. We cannot abandon Afghan women & girls. We cannot act as if their lives and happiness do not matter. (via @baysal_nurcan ) @RoryStewartUK pic.twitter.com/5kME58Jf40

Heartbroken for Afghanistan. Thinking about all Afghans tonight, and especially Afghan women and girls.

Taliban spokesman telling BBC News there will be a “peaceful” transition of power which will allow “participation” and “inclusion” in an Islamic Afghan Govt. But there can be no real inclusion if women are not allowed to vote or work and girls are unable to go to school

My heart breaks for Afghanistan, for the Afghan people, for the men, women, girls and boys whose lives will now be dictated by medieval tyrants, for the American families whose loved ones had their blood and souls spill into the soil of Afghanistan. The Taliban are terrorists.

While the global community may be split on a great many things in this divisive era, there is one thing that many can agree on: The future is bleak for Afghanistan’s women.