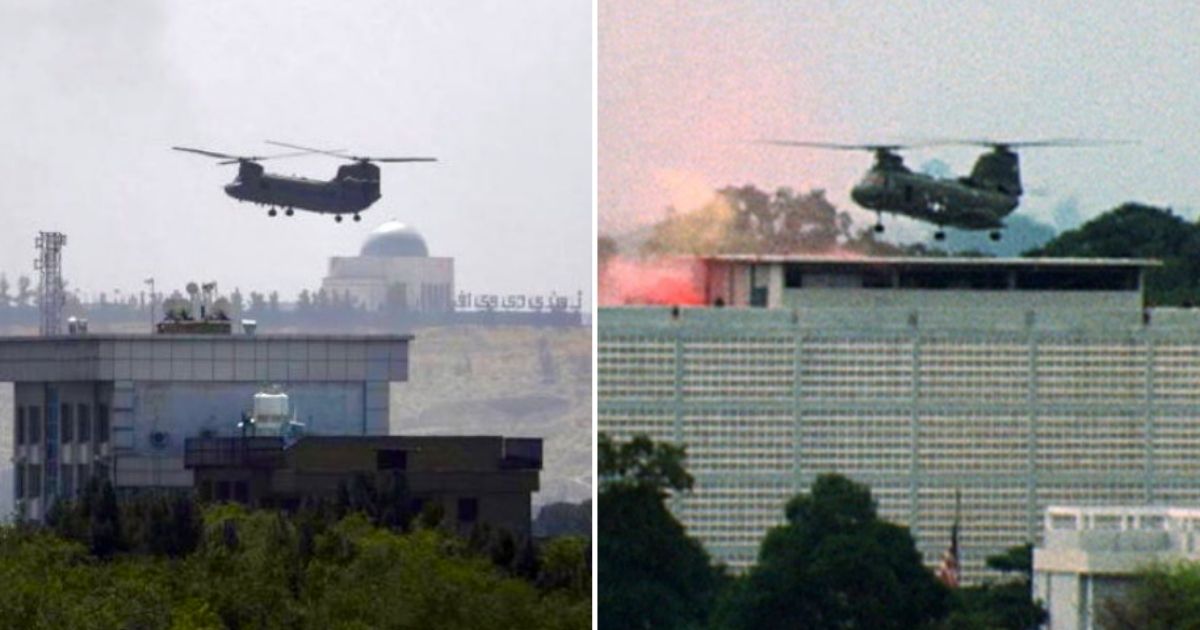 The following article, Biden Promised Kabul Would Not Turn Into Saigon, But Pictures Show the Same Scenario, was first published on Flag And Cross.

During a July 8 White House news conference where President Joe Biden addressed the drawdown of U.S. troops from Afghanistan, a reporter asked him the following question:

“Mr. President, some Vietnamese veterans see echoes of their experience in this withdrawal in Afghanistan. Do you see any parallels between this withdrawal and what happened in Vietnam, with some people feeling —”

Biden abruptly cut off the reporter, according to a transcript: “None whatsoever. Zero. What you had is — you had entire brigades breaking through the gates of our embassy — six, if I’m not mistaken.”

“The Taliban is not the south — the North Vietnamese army. They’re not — they’re not remotely comparable in terms of capability. There’s going to be no circumstance where you see people being lifted off the roof of a embassy in the — of the United States from Afghanistan. It is not at all comparable.”

How will Biden explain the striking similarities between the following two photographs posted on Twitter by investigative journalist Stefan Simanowitz, with each picture showing a Chinook transport helicopter landing on top of an embassy to evacuate stranded U.S. diplomats?

The first photograph was taken this weekend in Kabul, Afghanistan, and the second was taken during the 1975 fall of Saigon. Apparently, the circumstances were more comparable than Biden ever would have guessed.

The president needs to help us understand how his administration allowed this disgrace to happen.

The end came quickly. The Taliban had captured roughly 75 percent of Afghanistan by Friday. They added to their gains on Saturday when they took the northern city of Mazar-i-Sharif.

Reuters reported that early Sunday, the insurgents had taken Jalalabad “without a fight.” The U.S./NATO trained Afghanistan National Army put up no resistance. This gave the Taliban “control of one of the main highways into landlocked Afghanistan. They also took over the nearby Torkham border post with Pakistan, leaving Kabul airport the only way out of Afghanistan that is still in government hands,” according to Reuters.

Following the capture of these two cities, the Taliban encircled the capital city of Kabul.

On Saturday, staff inside the U.S. Embassy were said to be destroying sensitive documents. The following day, a Chinook would land on the rooftop to evacuate them to safety.

No one could have predicted the ease with which Kabul fell into the insurgents hands. Even the most cynical politicians imagined it would take at least a month.

And shortly afterward, the major networks broke the news that Afghan President Ashraf Ghani had fled the country and the fight was over. Fox News reported that the Taliban had entered the city “and demanded unconditional surrender.”

The insurgents are running the country.

Though the president and all of his officials will place the blame for this dumpster fire at the hands of the inept Afghan National Army and on former President Donald Trump, even the media holds Biden responsible — which is remarkable.

CNN national security analyst Peter Bergen notes the similarities between the fall of Afghanistan and what happened in Iraq following the 2011 withdrawal of U.S. troops from the country. Within three years, ISIS was in control.

Bergen reminds us “it was then-Vice President Joe Biden who had negotiated the Obama administration’s drawdown from Iraq.”

In his 2014 memoir, former Defense Secretary Robert Gates wrote: “I think he has been wrong on nearly every major foreign policy and national security issue over the past four decades.”

Biden has been in office for only seven months. Consider the damage he’s done.

I don’t think so.

Continue reading: Biden Promised Kabul Would Not Turn Into Saigon, But Pictures Show the Same Scenario ...

A picture is worth a thousand words, all the American people will see and remember, like in 1975, is a helicopter on an American embassy roof.