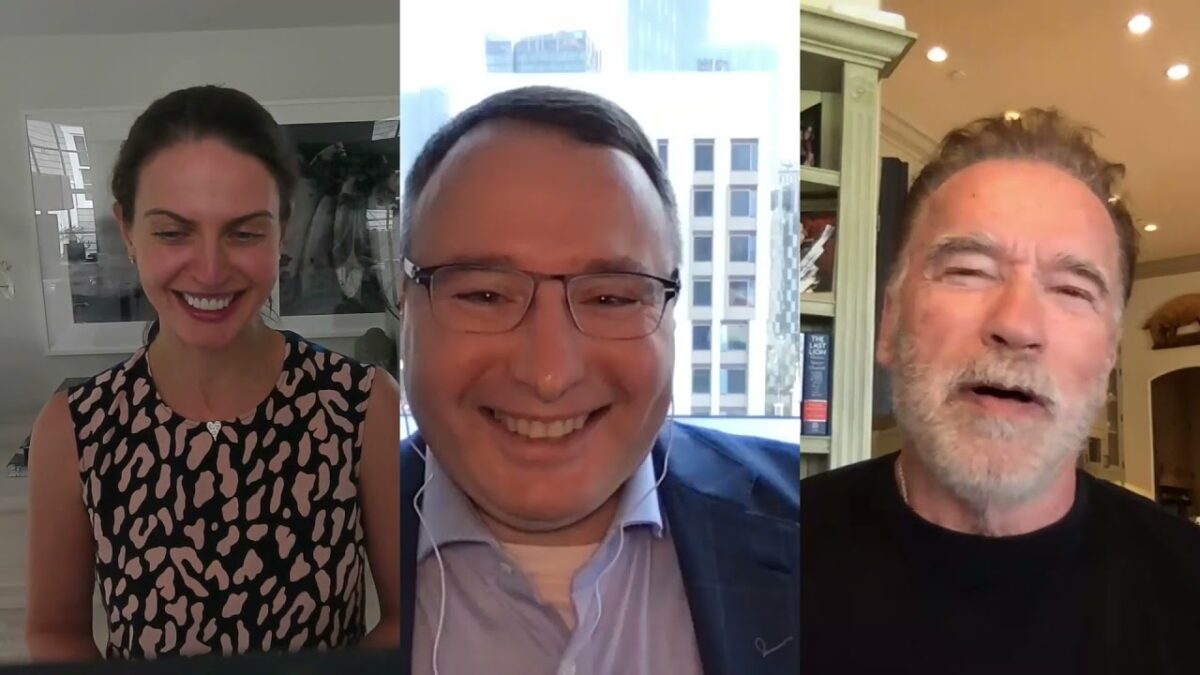 The following article, Arnold Schwarzenegger, Whose Dad Was a Nazi, Tells Anti-Mask-Mandate Americans: 'Screw Your Freedom', was first published on Flag And Cross.

Talk to the hand, Ahnold.

Former California Gov. Arnold Schwarzenegger became the latest celebrity to denigrate Americans who are tired of being told how to live by the elites.

His message to Americans who are fed up with vaccine demands, mask requirements and other coronavirus restrictions: “Screw your freedom.”

During the nearly hourlong segment, Schwarzenegger referenced the years leading up to World War II and how Europeans had been “lied to by a regime that was very evil.”

Naturally, he compared Adolf Hitler’s regime to the Trump administration and expressed his great relief that Trump was defeated and democracy prevailed.

From there, it was a mere hop, skip and a jump to the conservative backlash over the Biden administration’s latest round of vaccine mandates and mask requirements.

“There is a virus here. It kills people, and the only way we prevent it is to get vaccinated, to wear masks, do social distancing, washing your hands all the time and not just to think about, ‘Well, my freedom is being kind of disturbed here.’ No, screw your freedom,” Schwarzenegger said. “Because with freedom comes obligations and responsibilities.

“We cannot just say, ‘I have the right to do X, Y and Z.’ When you affect other people, that is when it gets serious.”

He equated the refusal to wear a mask to running a red light. It could get someone killed, he said.

“Yeah, you have the freedom to wear no mask, but you know something: You’re a schmuck for not wearing a mask because you’re … supposed to protect your fellow members around you. It’s just that simple.”

Yesterday while I was talking with @AVindman and @biannagolodryga about Alex’s new book, I was asked about my comment about COVID misinformation that all of you are sharing. Here was my answer: pic.twitter.com/8LKhPIJ1Eu

Referring to “experts” such as Dr. Anthony Fauci, he asked, “Why would you not believe someone like that?”

Maybe because Fauci tried to cover up the increasingly likely possibility that the coronavirus originated in the Wuhan Institute of Virology?

Or because his agency directed funds through EcoHealth Alliance to support gain-of-function research at that lab, according to Republican Sen. Rand Paul and others?

Or maybe because before he started pushing mask mania, he wrote in February 2020 that masks were “not really effective in keeping out the virus,” according to emails published earlier this year?

What makes Schwarzenegger’s comments even more egregious is that his father was a member of the Nazi Party, as was pointed out by Human Events editor Jack Posobiec and other conservatives.

Arnold Schwarzenegger says, “screw your freedom.” Turns out his Dad was a Nazi too. pic.twitter.com/t9Z1hTELTI

Newsweek published a fact check on that question Thursday and concluded: “Gustav Schwarzenegger was a Nazi Sergeant, having risen to the rank of master sergeant with the Feldgendarmerie, the military police wing of the Nazis, during the war.”

Gustav Schwarzenegger, a police officer and postal inspector, raised his family in the small village of Thal, Austria, according to Newsweek.

The elder Schwarzenegger had applied for party membership in 1938 and was “accepted three years later in 1941,” the report said. The investigation did not find evidence that linked Gustav Schwarzenegger to the “Sturmabteilung (SA) or the Schutzstaffel (SS).”

Prior to Arnold Schwarzenegger’s 2003 gubernatorial run, however, the Los Angeles Times unearthed “documents in the Austrian State Archives in Vienna” that revealed his father had joined the SA on May 1, 1939, which the fact check pointed out was just six months before the infamous Kristallnacht.

Newsweek also reported that Gustav Schwarzenegger “served in the Unified Armed Forces of the Nazi Party, known as the Wehrmacht, and fought in some of the most brutal theaters of the war including the invasions of Poland and France as well as the siege of Leningrad.”

Moreover, it said, “Holocaust scholar Michael Berenbaum noted that Gustav appeared to have been ‘in the thick of the battle during the most difficult times’ in conflicts where some of ‘most horrific military and nonmilitary killings’ took place.”

While Arnold Schwarzenegger is not his father, his anti-freedom message makes one wonder about the extent of his father’s influence on his life.

Certainly, “Screw your freedom” is a comment that wouldn’t be out of place in a totalitarian regime.

And it makes us question the sincerity of the rhetoric we’ve heard from Schwarzenegger in the past.

In August 2004, Schwarzenegger, then the governor, addressed the Republican National Convention. He began his widely acclaimed speech with a dig at the Democrats, saying that “one of my movies was called ‘True Lies.’ And that’s what the Democrats should have called their convention.”

He gave his audience the distinct impression that his family opposed the Nazi Party.

“When I was a boy, the Soviets occupied part of Austria,” Schwarzenegger said. “I saw their tanks in the streets. I saw communism with my own eyes. I remember the fear we had when we had to cross into the Soviet sector.

“Growing up, we were told, ‘Don’t look the soldiers in the eye. Just look straight ahead.’ It was a common belief that Soviet soldiers could take a man out of his own car and ship him back to the Soviet Union as slave labor.

“But one day we were in my uncle’s car. It was near dark as we came to the Soviet checkpoint. I was a little boy. I was not an action hero back then.

“But I remember. I remember how scared I was that the soldiers would pull my father or my uncle out of the car and I would never see them again. My family and so many others lived in fear of the Soviet boot. Today, the world no longer fears the Soviet Union, and it is because of the United States of America.”

Schwarzenegger discussed his arrival in America in 1968 and what led to his decision to become a Republican.

“The presidential campaign was in full swing. I remember watching the Nixon-Humphrey presidential race on TV,” he said, referring to Republican Richard Nixon and his Democratic opponent, Hubert Humphrey. “A friend of mine who spoke German and English translated for me. I heard Humphrey saying things that sounded like socialism, which I had just left.

“I said to my friend, I said, ‘What party is he?'” His friend said that Nixon was a Republican.

Schwarzenegger told the crowd it was OK to disagree with your party. That was what was so great about America. “Here we can respectfully disagree and still be patriotic, still be American and still be good Republicans.”

That’s not what we heard from him this week.

At the 2004 convention, he explained how you know you are a Republican. Here were some of the clues, according to Schwarzenegger:

Californians’ expectations were high when Schwarzenegger won the 2003 recall election in the state. Eight years later, however, he had disappointed even his strongest supporters.

“California voters can only marvel that a leader of such apparent strength is leaving the Golden State such a weakling — its institutions eroded and its finances more of a mess than when he took over from Gray Davis after the 2003 recall,” he wrote. “Even among Schwarzenegger’s earliest detractors, few would have dared to predict that by his last summer in office, the governor who had entered the statehouse a movie star would bottom out with a 22 percent public approval rating, tying Davis for the lowest recorded approval rating in California history.”

Summing up, Leibowitz wrote: “Who could doubt a political action hero? To the rest of the world the governor remains that all-powerful, charismatic charmer with a sly sense of humor and mastery over every situation.

“These past seven years, however, we Californians have experienced an Arnold Schwarzenegger many of us wish we’d never met: a politician who often seemed in over his head, who prevaricated and bungled, switching sides as it suited him to save his political skin.”

And Schwarzenegger would do well to remember he’s not really an action hero. He just played one on TV.