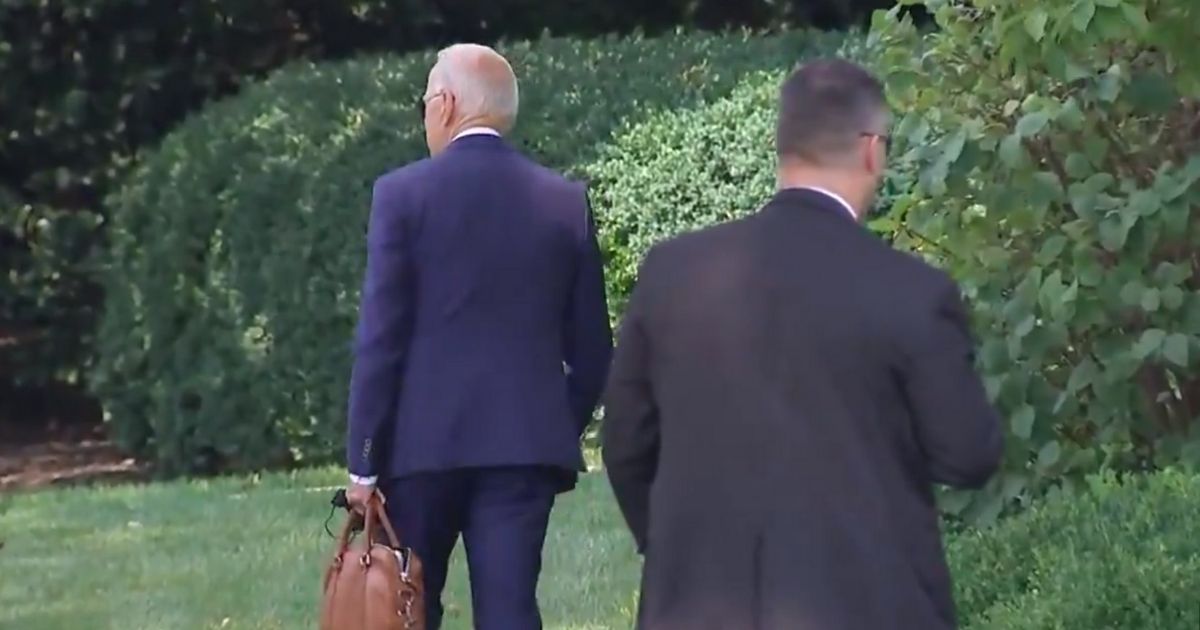 The following article, Lost Biden Wanders Onto Grass Even After Secret Service Handler Points Where to Walk, was first published on Flag And Cross.

President Joe Biden’s mental capabilities have been called into question countless times during his relatively short time in office.

Whether it has been forgetting how many people live in the United States, falling up the stairs or any number of other stumbles or gaffes, he has continued to cast doubt onto his own physical and mental health.

On Tuesday, a video clip of the 78-year-old president’s return to the White House once again caused many Americans to wonder whether his mental capacities are below the appropriate level for the leader of the free world.

The Hill posted a video on Twitter of Biden walking up to the Oval Office after a long weekend in his hometown of Wilmington, Delaware. He can be seen walking down the sidewalk leading up to the door.

A few seconds into the video, a Secret Service agent walking in front of Biden pointed toward a right turn into the sidewalk, seemingly showing Biden where to walk.

Instead of following the apparent direction, Biden continued to walk straight and wandered onto the grass.

He eventually found his way to the door after taking an unnecessarily circuitous path.

I feel bad for the agents. They are well trained machines of protection and now they are babysitting. This isn’t funny this is dangerous and scary. Just watching him walk worries me. #makeamericaflorida #takebackamerica

How did he get lost on a sidewalk?

This is so disturbing…

They have to point to show him where to walk just like they have to write down what he has to say.

Indeed, it was less than two weeks ago when Biden had to be given a note from one of his aides to inform him he had something on his chin during a meeting.

The president proceeded to wipe whatever was on his chin onto his hand and briefly examine it, and then appeared to put it into his mouth.

After a staffer gives Joe Biden a note saying, “there’s something on your chin,” Biden wipes his chin.

Then appears to put whatever was on his chin in his mouth? pic.twitter.com/VvN17i4IWY

Then there was the incident just last week when Biden confidently proclaimed 350 million Americans had been vaccinated, despite the fact that fewer than 350 million people live in the country.

There are only 328 million people in the United States. pic.twitter.com/mdJ2VRCp8c

Without audio or the ability to look into Biden’s brain, it is admittedly difficult to know why he decided to walk onto the grass instead of following the sidewalk. But given his track record, it is not unreasonable to add the incident to his long list of gaffes.

At the very least, a Secret Service member apparently has to direct Biden to simply follow a sidewalk, just as an aide had to pass him a note to tell him his chin needed wiping.

While the details of this particular incident remain murky, the president sure seems to be facing a cognitive decline.

Many Americans are rightfully concerned about the mental capacities of the man tapped to lead the country.

Continue reading: Lost Biden Wanders Onto Grass Even After Secret Service Handler Points Where to Walk ...