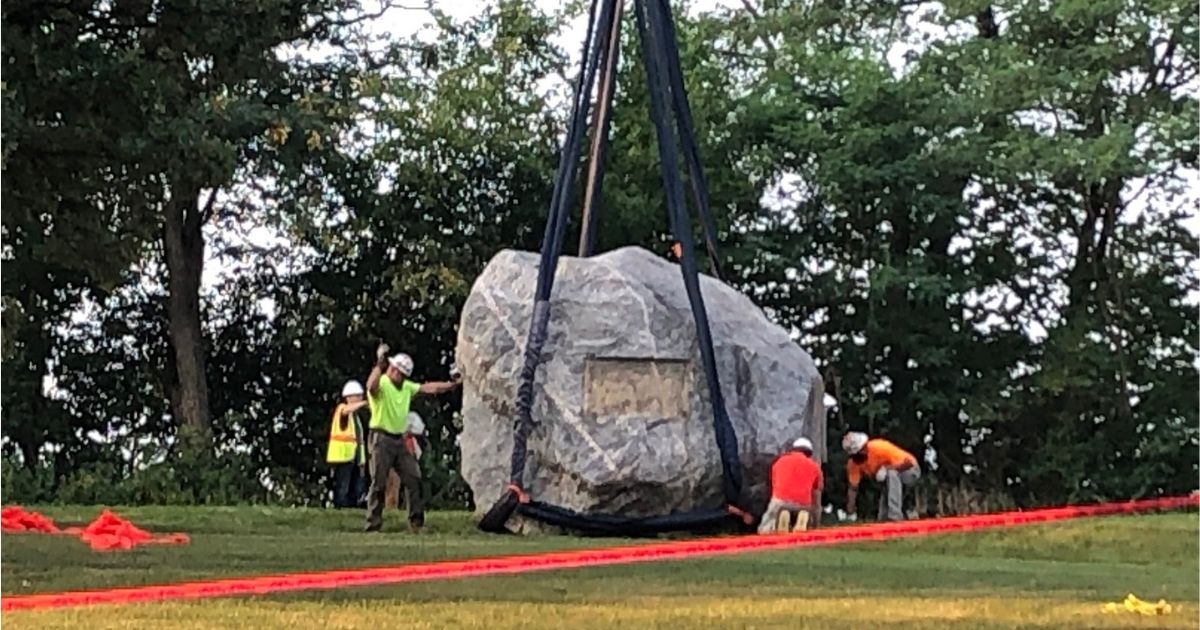 It’s bad enough when public figures get canceled for a stupid tweet they posted when they were in their teens. The Chamberlin Rock has them beat; it is said to be 2 billion years old, and it’s been removed from the University of Wisconsin campus because 96 years ago a journalist referred to it by a racist term.

According to Fox News, the rock is a rare geological specimen that the school excavated and placed atop the Madison campus’ Observatory Hill in 1925.

The stone was meant to honor Thomas Crowder Chamberlin, a former university president and geologist whose work revolved around glacial deposits; the rock had been carried from Canada to Wisconsin via glacial movement.

Unfortunately, when the rock was first placed atop the hill back in the 1920s, an odious term was oft used to describe large, dark rocks: n*****head. The Wisconsin State Journal used the word several times to describe Chamberlin Rock in its coverage of the October 1925 dedication.

And then, poof — nothing else can be documented. The racist term itself fell out of usage by the 1950s, and there are no other known instances of the epithet being used to describe the rock.

Yet when the Black Student Union and a Native American student organization called Wunk Sheek complained about the Journal’s use of the word and demanded the 70-ton rock be removed, the university’s response was anything but glacial.

Chamberlin Rock is being moved to another @UWMadison property on Lake Kegonsa. Student groups like @wbsu_black pushed for its removal because of its racist background. #news3now pic.twitter.com/KMDXoiI56D

In November, after activists testified before the Campus Planning Committee and called for the boulder’s removal, the committee unanimously recommended that the rock be removed. Chancellor Rebecca Blank agreed, and on Friday the rock was moved from campus.

In a statement, the University of Wisconsin said Chamberlin Rock was “an object that had become a painful symbol of racism to generations of students.”

“It took courage and commitment for the Wisconsin Black Student Union to bring this issue forward and to influence change alongside UW’s Wunk Sheek student leaders,” vice chancellor of student affairs Lori Reesor said in the statement.

“In the midst of demands for justice following George Floyd’s murder last summer, the students wanted change on campus and they worked hard to see this through. While the decision required compromise, I’m proud of the student leaders and the collaboration it took to get here.”

“It was very meaningful for me to be there and to see the process all the way through to the end,” said Nalah McWhorter, president of the Wisconsin Black Student Union and one of the driving forces behind getting Chamberlin Rock moved.

“It was about a year ago that we released our demands and met with the chancellor and explained to her why those demands meant so much to us. It was a powerful moment today to see this demand come full circle.”

Now, the rock — described on the university’s website as “a rare, large example of a pre-Cambrian era glacial erratic, likely over two billion years old” — will reside on “university-owned land southeast of Madison near Lake Kegonsa.”

“Moving the rock to this remote site prevents further harm to our community while preserving the rock’s educational and research value for current and future scholars,” said Gary Brown, director of campus planning and landscape architecture.

“Students and the general public will no longer casually encounter the rock, but it will remain available to those specifically seeking it out for teaching and learning purposes.”

All because a reporter for the Wisconsin State Journal used a disgusting racial epithet to describe the rock nearly 100 years ago.

Granted, there’s no way to retroactively cancel Russell B. Pyre, the Dickensian-named journalist who wrote the original piece in 1925. However, as 1920s-era newspapermen go, Mr. Pyre isn’t exactly H.L. Mencken or Damon Runyon. Those who want to read his work have to actively search for it.

What remains unclear is how the article was unearthed and how it affects University of Wisconsin students nearly a century later.

And yes, there might have been other uses of the offensive term in question to describe Chamberlin Rock, but nobody’s managed to find them in nearly a year of searching.

Not that this particularly matters. In November, here’s how the Wisconsin State Journal reported the testimony before the Campus Planning Committee: “Kacie Butcher, the university’s public history project director, told the Campus Planning Committee that there may be other records beyond the State Journal story, but locating them is difficult because archived records are not well organized.

“What is well-documented during that time period, however, is the Klu Klux Klan’s active presence in Madison. Campus satire publications and comedy skits also mocked and dehumanized people of color.” (Emphasis ours.)

Sure, there was nothing to indicate the racist term was ever used to describe Chamberlin Rock apart from that one article, Butcher said, but the KKK was prevalent during that period and students were also pretty racist back in the 1920s. Which is terrible — but what the heck does that have to do with the rock?

That’s a silly question, since none of this has to do with the rock. Woke students found a silly cause to rally around and a woke university was more than happy to accommodate them.

As Fox News noted, this is the same group of activists who demanded the removal of a statue of Abraham Lincoln from campus. In that case, for reasons no one has to spell out, the administration wasn’t quite as eager to acquiesce.

Shame that Chamberlin Rock was a bit more expendable than Honest Abe, but you’ve got to break a few 70-ton rare geological eggs to make an omelette.