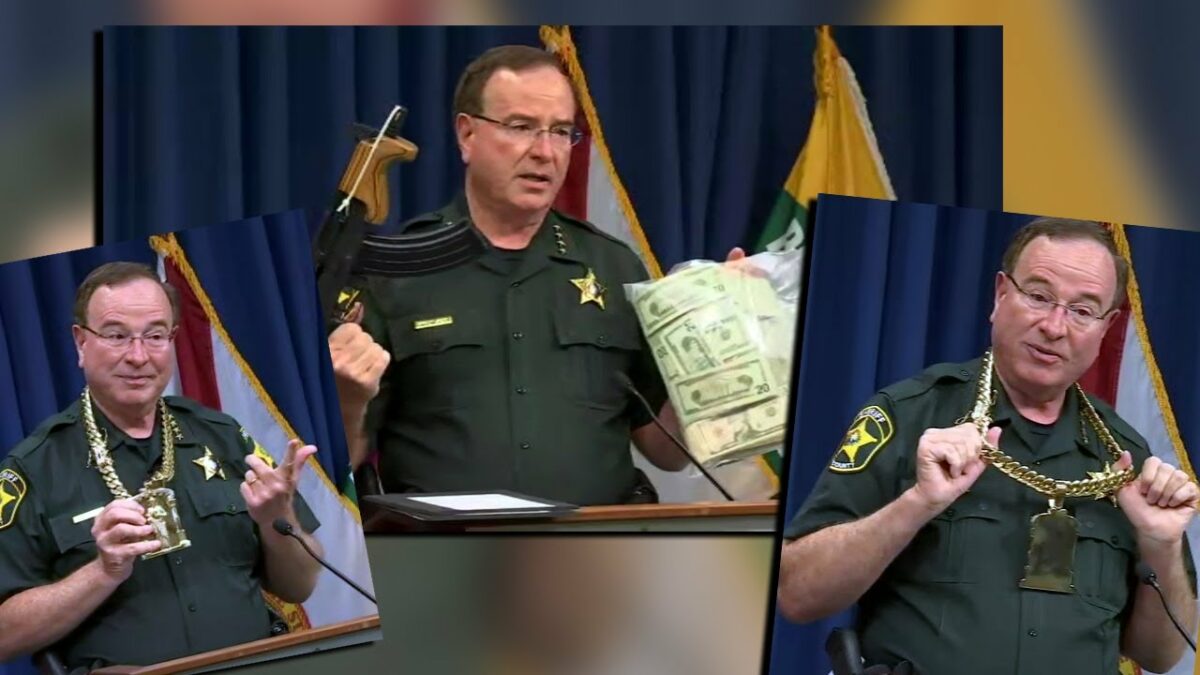 The following article, Sheriff Throws on Huge Chain Seized in Drug Bust, Raps About the Men Now Sitting in County Jail, was first published on Flag And Cross.

Polk County, Florida, Sheriff Grady Judd is not afraid to get creative when it comes to addressing drug trafficking.

One of the latest examples of this creativity came during a news conference July 22 following the end of a sting operation known as “Operation Bell Gang Blues.”

The 16-month-long undercover investigation ended with 32 suspects being charged with a whopping 301 felonies and 134 misdemeanors in total, WFLA-TV reported.

Judd took the opportunity to issue a powerful message to those now behind bars and others allegedly involved in drug trafficking.

“That’s right, they thought they were cool. Well, how cool are you today? Can y’all make up a rap song about this?” Judd rhetorically asked, while holding up mugshots of two of the suspects.

“Well I’ll help you out,” he continued, before places a large gold chain that was seized by law enforcement around his own neck.

“You see, we got your gold. We put your tail, in the county jail. Think about that, brothers. And you know what, this, you could call it the ‘Bell Gang Blue’ rap song, how’s that?

“You may think it’s cool, but it’ll end up with you arrested every time.”

He then pointed to the pendant on the necklace and added, “It’s not bad, if you got it legal.”

The seized drugs and guns were worth a combined $283,820, police said.

Considering what police say these suspects were allegedly found with — meth, Ecstasy, cocaine, heroin, firearms, jewelry and much more — it’s no wonder that Judd is frustrated yet proud of the work his team did to uncover their alleged wrongdoing.

“It amazes me that some people still think drug traffickers are somehow low-level, nonviolent criminals. In this instance, 11 guns were in the hands of these felons – two of which were stolen,” he said in the news conference.

“Illegal drugs ruin lives, destroy families, drive up property crime and wreck neighborhoods. Our community is safer because of the outstanding work by our detectives.”

Many people might get involved in organized crime because they view it as a lucrative way to earn money, but Judd is correct that they almost always get caught eventually.

The impacts of drug use trickle down into families, schools and businesses, therefore inflicting serious damage on communities that are likely already vulnerable.

Police efforts to crack down on drug crime in cases like these are often highly scrutinized, but they are absolutely necessary.