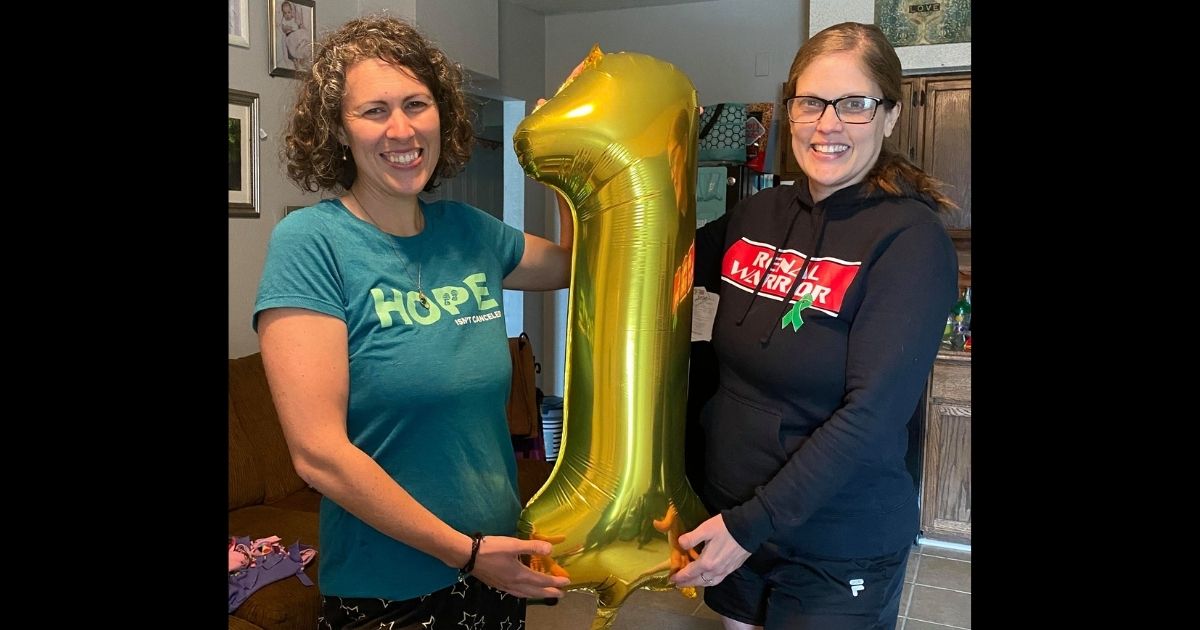 The following article, After Plea for Kidney Donor on Social Media, Stranger Turns Out to Be Perfect Match for Single Mom, was first published on Flag And Cross.

Sometimes things that appear to be coincidental catch our attention for a reason that mere coincidence can’t explain. A repeating theme in our lives can help direct us to opportunities and ways to be a blessing to others that we might otherwise miss.

Brittany Clark, a teacher and single mom from South Carolina, experienced something like that last year on Facebook. One day she got on her account to see a plea from a woman named Kim Shufelberger from Olathe, Kansas, who desperately needed a kidney. You’ve probably seen something similar in your use of social media.

Later that day, when she was on Facebook again, the same post came up in her feed again, and that’s when she decided to accept the nudge.

Clark reached out to Shufelberger and made arrangements to get tested, even though it involved a 15-hour drive. Sure enough, testing determined that she was a match.

“I’ll never forget getting that call,” Shufelberger said, according to Fox News. “There was a lady that said, ‘There’s a girl who stepped forward … she’s a perfect match.’”

That news was music to Shufelberger’s ears. She’d been diagnosed with chronic kidney disease in 2006, when she was pregnant with her now 14-year-old daughter. At the time, doctors found out the disease that was so advanced that they told her she “shouldn’t be having a child.”

“I just wasn’t feeling right,” she said of her condition during the pregnancy. “I knew something was wrong. I thought, ‘Maybe I’m pregnant and this is how you feel.'”

Even though she’s been on a donor list, she was never “up next,” and in 2020 she was told that her disease had reached stage 4. That’s when the search for a kidney was redoubled.

“I’m a single parent. I want more than anything to see my daughter grow up!!” Shufelberger shared in a November Facebook post. “I’ve been fighting this disease for at least 14 years. I found out I had it when I was pregnant in 2006. When I found out I had chronic kidney disease I was already in stage 2. I carried Alexis through an illness I didn’t even know I had!! Miracle!! Alexis means the absolute world to me!!”

“I have stage 5 (end stage) chronic kidney disease. I’m in NEED of a living kidney donor. My kidney function is 14%.”

She wrote that all she wanted for Christmas was a kidney — and in December, she got the call that things were moving forward and Clark would be her donor.

“I wish I could have hugged her in person,” Shufelberger said.

The surgery was set for May at Saint Luke’s Hospital of Kansas City, and the day couldn’t come quickly enough.

“2 DAYS until surgery,” Shufelberger posted on May 16. “The time has flown so very fast. Please continue to keep Brittany & I in your prayers – esp our children. We most definitely need prayers for the medical team – nurses, surgeons, etc….

“Tuesday morning will be here before we know it & Brittany will have saved my life.”

The surgery went well and the new-to-Shufelberger kidney was hard at work.

“Thank ALL Y’ALL for the prayers,” Clark posted on her page. “We wouldn’t be checking out of the hospital as soon as we are without God’s healing hand on us! St. Luke’s Renal Transplant team members are so kind and have been the best the past few days. But now to get ‘home’ and rest up!”

Now, Shufelberger has two main points she wants people to know about kidney disease: that it’s quiet, and that it’s in the top 10 leading causes of death in the United States.

“Kidney disease is silent,” she shared on a Facebook post. “Most don’t know they have it until later stages. I was in late stage 2 when I found out. I had no clue!!”

Not only has Shufelberger gained a kidney, but she has also gained a lifelong friend. The two refer to each other as “sister” and talk all the time. They have a lot they bonded over beside that transplant, both being single moms and teachers — and being women of faith, they know there was more than “coincidence” at work.

“Whatever situation you are in,” Clark shared on Facebook, “God is right with you, and He has a plan.”

Continue reading: After Plea for Kidney Donor on Social Media, Stranger Turns Out to Be Perfect Match for Single Mom ...