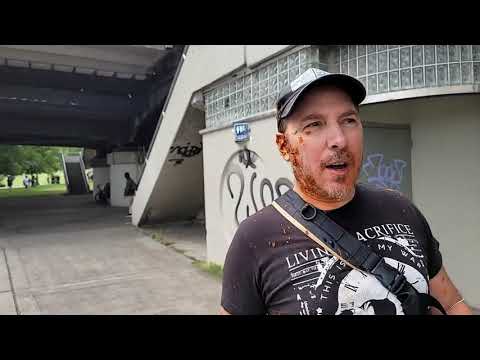 An evangelical Christian group had gathered peacefully on Saturday afternoon at a downtown park near the Portland waterfront for a worship service, when dozens of armed antifa terrorists, carrying shields and dressed in black, showed up to put an end to it.

Journalist Andy Ngo posted video of the incident on Twitter. In the first video below, an antifa thug is shown trying to provoke the worshippers, who refused to engage.

One worshipper is heard asking, “What are you mad about?”

Another says, “We speak peace to you in Jesus’ name.”

WARNING: The following videos contain vulgar language and footage that some viewers will find offensive.

The agitator moves toward this man, shouting unintelligibly, as the rest of the group closes in on the worshippers. An antifa member grabs the microphone to announce that “all cops are bastards in the name of Jesus. Amen.”

The mob starts toppling sound equipment, which they will eventually throw into the nearby Willamette River. Some of them sprayed what was believed to be pepper spray at the worshippers. A voice is heard yelling, “Where is your God now?”

Shocking video recorded in Portland show a large group of antifa carrying shields & weapons move in to attack & shut down a family Christian prayer & worship event on the waterfront. Police did not intervene. pic.twitter.com/8JZuI1LPHo

In the following video, a woman attending the worship event describes what took place. “Antifa just rolled in like an angry mob, started throwing flash bombs at everybody, macing everybody, rotten eggs at everybody, black paint. They threw a flash bomb into a group of kids that were out there, from like 4-months-old to like 10. Yeah, they were ruthless.”

A pastor who asked antifa not to throw things at the children was maced.

A woman attendee of the family Christian prayer event at the waterfront in downtown Portland describes what happened when antifa attacked them. pic.twitter.com/OtbHVftDor

According to one of the militant antifa members who witnessed the violent direct action, antifa threw the Christian group’s sound equipment into the Willamette River. The attendees, which included children, were hit with projectiles & pepper spray. pic.twitter.com/Fyh8SYjRa6

According to this antifa account, after assaulting the attendees of the Portland family Christian prayer event, they stole their food and water. pic.twitter.com/BJ9ocq5UEh

Pastor Artur Pawlowski from Calgary, Canada, was to speak at the event. Pawlowski has been among Canadian ministers who have spoken out recently “against lockdown measures that targeted places of worship.”

When this event was announced last month on Twitter, Portland antifa member Melissa Lewis replied, “Welcome to Portland, you won’t like it here, pastor.”

This is where the “defund the police” movement has brought America.

We’re up against people who are so devoted to their evil cause, they believe they’re justified in physically assaulting and stealing from those who disagree with them. This is the group whom the left refuses to condemn.

This is what happens when there are no consequences for unlawful actions. This group of organized criminals indulges in heinous and illegal conduct with impunity.

Behavior once considered radical has become mainstream. What used to shock us, is now met with a shrug.

How do all those suburban women who voted for “anyone but Trump” feel about the casual acceptance of everyday violence by Democratic lawmakers? Do they realize how far our once great nation has fallen in just six months?

A government that will not or cannot enforce its laws or one that applies the law selectively, will eventually fall.