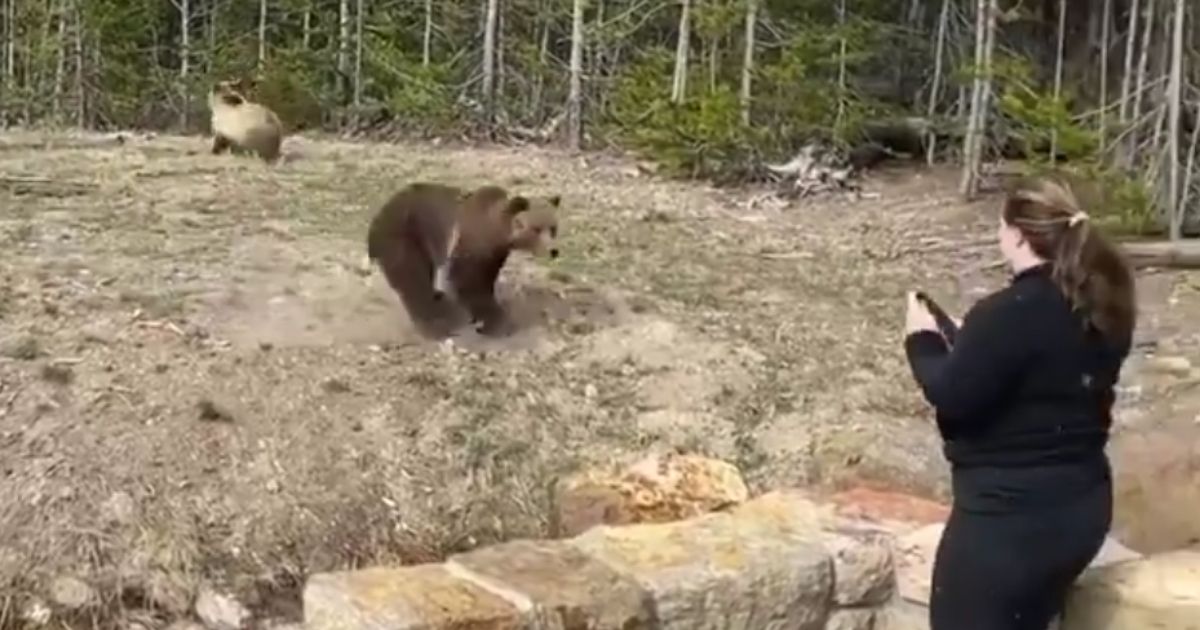 The following article, Woman Allegedly Provokes Grizzly Into a Charge with Photo Op; Now She's Set to Appear in Court After Officers See the Video, was first published on Flag And Cross.

Yellowstone National Park is neither a zoo nor a drive-through safari at Six Flags.

If you treat it as such, you deserve what you get.

According to WBBM-TV, the suburban Chicago woman faces charges of feeding, touching, teasing, frightening or intentionally disturbing wildlife and violating closures and use limits after a viral video from earlier this year allegedly showed her approaching a mother bear and her cubs in the Wyoming national park.

The video originally was shot on May 10 and posted to Instagram by another user.

In it, the mother grizzly bear can be seen making a tentative charge toward a woman, who quickly moves away. The bear then backs off.

“Oh my God, oh my God,” one of the women filming, who was inside her vehicle, can be heard saying.

“I got that on video,” said another woman inside the car.

Yellowstone rangers are looking for woman who approached grizzly bear with her phone. pic.twitter.com/1zEB1QFXzv

“WE TOOK THE VIDEO FROM INSIDE OUR VEHICLE, AND DON’T KNOW THE WOMAN IN THE VIDEO! Absolutely INSANE that @shaylee_addington and I witnessed this today,” Instagram user darcie_addington wrote.

WBBM reported that Dehring was with a tourist group that spotted the mama bear and cubs. The group returned to their vehicles when the bears got closer and told Dehring to follow them, but she didn’t listen until the mama bear charged. Authorities say she was taking photos about 15 feet away from the bear.

The video was taken in the Roaring Mountain area of Yellowstone.

Unfortunately, these things have a tendency to go viral, and authorities weren’t amused when they saw the video. Park regulations require that visitors stay 300 feet from bears and wolves, according to the Billings (Montana) Gazette.

On May 25, Yellowstone posted a picture of the woman in the video on its Facebook page in hopes of identifying her. In what might not go down as the smoothest of moves, court documents say Dehring unfollowed Yellowstone’s page the same day, according to yahoo!news.

However, a tipster said they’d seen the video posted with Dehring being tagged as the woman in the clip.

Investigators subsequently obtained a search warrant for Dehring’s Facebook page. On it, they say they found photos of the bears from Yellowstone, along with a caption that said she was “absolutely floored by the beauty of this place.”

Dehring was charged in U.S. District Court in Yellowstone Park and is set to appear on Aug. 26, according to WBBM. She has yet to enter a plea.

Yes, this could end up being some pretty steep justice for the Chicago-area woman. However, wildlife isn’t cute or cuddly — particularly bears, which don’t just want to take your pick-a-nick baskets.

Just two weeks after Dehring’s viral infamy began, a 39-year-old hiker was injured by what he said were two grizzly bears in Yellowstone; despite serious injuries to his lower extremities, he was able to make it out on his own, according to KTVQ-TV.

Dehring allegedly got close enough to provoke a bear into a charge — something that could have ended far more tragically. This is why the rules — and the concomitant punishments — exist.

This ill-advised photo opportunity might end with some serious legal problems for Dehring, but at least she’s alive to face them.