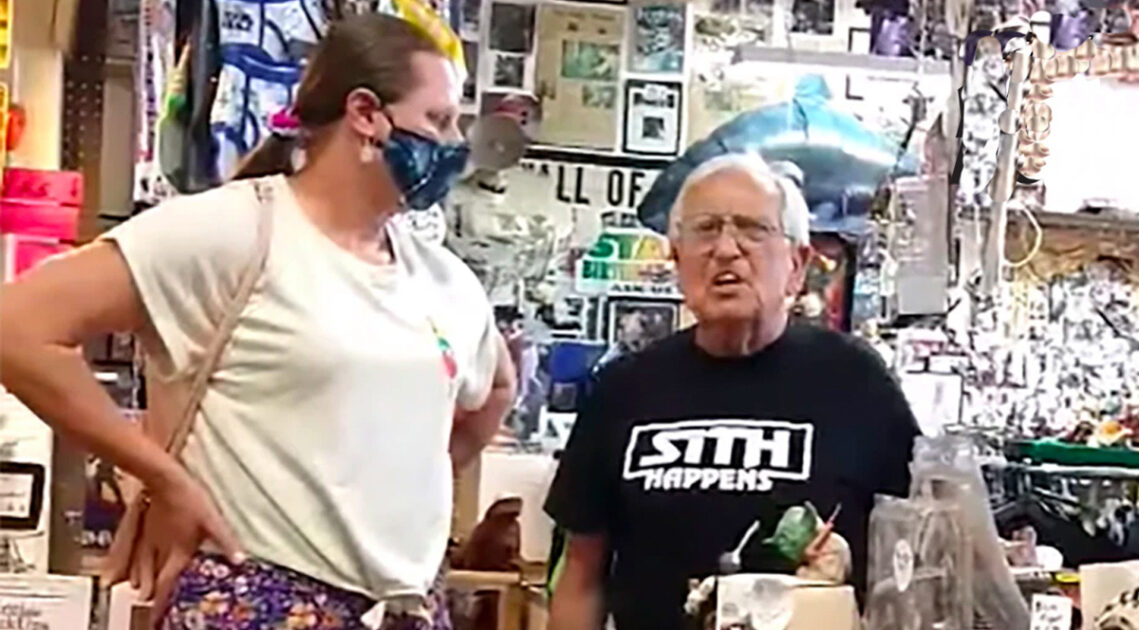 The following article, WATCH: Store Owner Strikes Back, Stands Ground Against Transgender Lunacy, was first published on Flag And Cross.

An Aberdeen, Washington, store owner has gone viral with a video showing that he won’t be cowed by the extremist, left-wing, anti-science, transgender agenda, and it’s about time someone spoke up like this.

The video seems to depict a transgender nut arguing with science fiction collectible store owner Don Sucher over a sign posted in the store that reads, “If you’re born with a dick, you’re not a chick.”

In the video, the transgender activist argued that he disagrees with the sign. He disgorged the left’s new slogan, “transgender women are women,” and added, “I’m living my life the way I want to live it.”

In the video, Sucher does pull the sign down as they are arguing, but he refuses to bow to the left-wing mantra. Sucher added that “nine out of ten customers come in and they are on my side of this.”

“Nobody confronts your ass because you know what, they’re afraid they’re going to hurt your feelings,” the store owner added proving that he isn’t going to back down in the face of the activist’s attacks.

Sucher went on saying, “Do you know how many people you have embarrassed at city hall? You’re nuts. You’re not a woman. You don’t look like a woman, you don’t act like a woman … You are an asshole.”

The businessman also noted that the trans activists gets away with his actions because no one will confront him.

“Do you think there is one person that really thinks you are a chick? … Nobody confronts you, that’s the problem,” Sucher said.

The argument continued outside the shop where Sucher yells, “Do you have a dick? I’ll bet you do!”

The activist then plays the victim saying, “You don’t get to ask that, you are a bigot,” and, “You’re harassing me … I’m trying to leave.”

“I’m confronting your ass because nobody does,” the store owner exclaimed. “You’re embarrassing the whole community … You said you’re a chick and you’re not.”

“Are you just going to check my ass out?” the activist said in a lame attempt at a comeback. “Stop staring at my ass.”

Be aware there are a lot of curse words, so the video is not safe for work:

Hopefully the store owner won’t be sued, but I agree with him 100%
God said He made male and female. Pretending to be a female when a biological male is just that- pretending. It is a mental disorder. DNA does not lie- it knows if one is male (XY) or female (XX).

Glad to see someone standing up to these nut jobs. I personally think that many of these people identifying as transgender are just doing it for attention. They are taking advantage of the progressive whack job mentality. It’s all about getting attention and belonging To a new group.

if you’re born with a dick you’re not a chick, love it.

That’s one unattractive “chick.” Imagine being that guy’s mother?