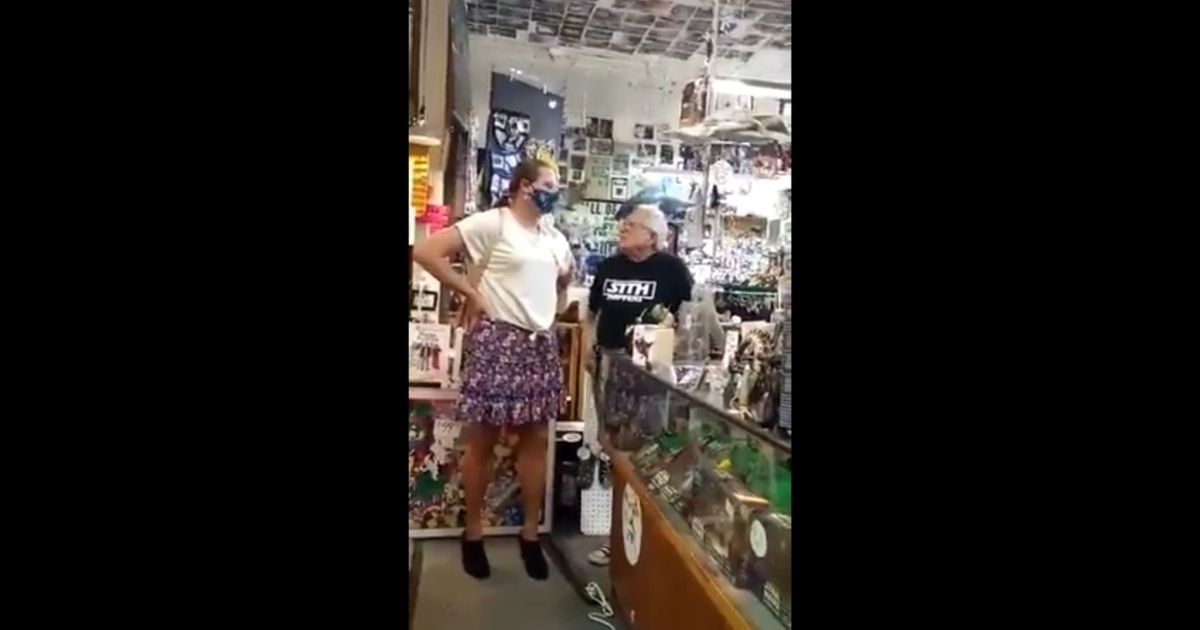 The following article, Small Business Owner Goes off on Trans Official Confronting Him in His Own Store: 'You're Not a Woman!', was first published on Flag And Cross.

A Washington state store owner’s heated confrontation with a transgender city councilmember has gone viral after a crude sign prompted Tiesa Meskis, who identifies as a woman, to visit his establishment in person to voice his objections.

Don Sucher, the owner of the Sucher & Sons Star Wars Shop in Aberdeen, had displayed a sign in his window that, according to the New York Post, read, “Just out. Dr Seuss’s new book. ‘If you are born with a d***, you are NOT a chick’. Period. This new release is out now because cancel culture banned his early books.”

Now, Sucher lives in Washington state, so he might have guessed that he’d receive backlash for this blunt and crude sign, and frankly, it’s a wonder that antifa has not yet visited his establishment to inflict violence in response to speech that they consider to be violence.

But Meskis, who according to local station KING-TV is in the process of transitioning, certainly took issue with the signage. He later told the station that he simply wanted to express to Sucher how hurtful the sign was, but through the course of their exchange, it became clear that, for all Sucher’s callous disinterest in the feelings of trans people, Meskis most importantly wanted to insist that “trans women are women.”

A video of the confrontation was shared to Twitter, and in it, Sucher can be heard insisting to the frustrated Meskis that “everybody loves” the offending sign.

“They take pictures of it and they post it,” the shop owner insisted to a dubious Meskis.

“Nine out of 10 customers love it,” Sucher insisted.

When Meskis, an elected official, replied that this was “bulls***,” Sucher shot back with the brutal truth.

“No, what you’re spouting is bulls***,” Sucher replied.

I mean, the man has a point.

Meskis, who apparently picked up his debate skills on the playground (not that his opponent’s were any more refined), declared defiantly, “No it’s not. Trans women are women, sir, that sign is bulls***.”

Since both sides had devolved to cussing and name-calling at this point, if we put aside sportsmanship, the principles of informal logic and any regard for basic decency and examine this petty clash on the basis of truth alone, we must admit that Sucher has the stronger case.

Vulgar as it may sound, “trans women” are not, in fact, women. They’re men who believe they’re women — that’s why they’re called “trans.”

And as Sucher would go on to bluntly declare, it only takes one look at Meskis to see that, no matter how valid the case may be that he deserves both equal rights and to be treated with basic human kindness, he is not, in fact, a woman, nor will he ever be.

“You are nuts,” Sucher said. “You’re not a woman! You don’t look like a woman, you don’t act like a woman!”

There was much petty back-and-forth between the two men for the majority of this exchange, with Sucher calling Meskis “f***ed in the head” which was certainly not gaining him any sympathy.

However, Meskis seemed particularly triggered when Sucher insisted that his sales went up whenever he put the sign up because as the store proprietor insisted, “people want this.”

This was where he had Meskis at a loss — and where this situation, for all Sucher’s eccentricity and rudeness, most certainly becomes worthy of commentary.

Sucher, at the end of the day, simply didn’t care when Meskis threatened to show “this side” of him to the local community.

“You do it, you do it,” Sucher confidently replied, clearly completely unbothered. And this is where he undeniably gained the upper hand.

Speaking to KING after the incident, Sucher was clear that he had every right to display his sign and he simply didn’t care if it offended anyone. Meskis thought that it would serve as a threat that people would be upset by Sucher’s sign, but Sucher deliberately put it on display in the window of his own store, so what sort of threat was that?

He was, quite plainly, asking for all this — and he’s clearly been emboldened by the support says he’s gotten from people who he says are eager for this kind of blunt backlash to the transgender movement.

He simply doesn’t think that trans women are women, has no issue saying so and is attaching this message to his business and livelihood because he thinks it makes people laugh, and believes he’s well within his rights to do so.

Which, whether we like his particular style of messaging or not, is indeed the case.

“I don’t care what they do, but don’t come in here and complain to me about stuff. I have free speech,” he told KING later.

“Here’s the thing,” he replied when asked if he was concerned his sign would be offensive. “I don’t give a f*** about feelings anymore … I went to Vietnam to fight for all this s***. Do you think I care about some a******’s feelings? Absolutely not.”

This man is my spirit animal pic.twitter.com/8wwxqpwE2y

This writer is a devout Christian woman who genuinely believes in the golden rule, and is hence not a big fan of cussing, vulgar language or callously dismissing other people’s feelings.

That said, this man’s refusal to care about the totalitarian mentality that has brought us to the point in society where people are getting punished by outrage mobs and Big Tech thought police for “misgendering” biological males is nothing short of inspiring, although I certainly would not strive to mimic his language or behavior myself.

Frankly, this is what exactly everyone who is concerned about the dominance of this dangerous ideology should be doing (how many cuss words you use is between you and the Lord, no judgment).

Even J.K. Rowling, who has penned what is easily the best genuinely liberal-minded response to the transgender movement that was full of nuance, compassion and careful reasoning, has been drug through the wringer despite her sensationally popular book series and status as one of the best-loved and most successful authors of all time.

I’m not saying that the articulate, well-reasoned, genuinely feeling arguments aren’t valuable — they are to those of us who still care about intellectual honesty and integrity.

The people who are screaming at us to insist that trans women are real women do not care. In fact, level-headed reasoning seems to infuriate them. (Why do you think Jordan Peterson triggers them so much?)

Meskis marched into Sucher’s store and found himself at a loss when Sucher plainly and shamelessly told him he really couldn’t care less if anyone was offended by his sign.

The trans movement has relied heavily on the narrative that we either validate their non-sensical, anti-science views on gender identity or be branded a bigot and subjected to a cancel mob.

This threat holds considerably less power when hurled at those who simply don’t care if their called names, especially when they are bolstered by the fact that others share their views.

This is the kind of defiance we all need to have, even if we may choose a higher route when it comes to the language we use or the compassion we preserve in our hearts for transgender people. Bold honesty and firmness in our own ideas and values are how we will preserve freedom, intellectual diversity and the value of truth — even, and most especially, unpopular truth.

Continue reading: Small Business Owner Goes off on Trans Official Confronting Him in His Own Store: 'You're Not a Woman!' ...