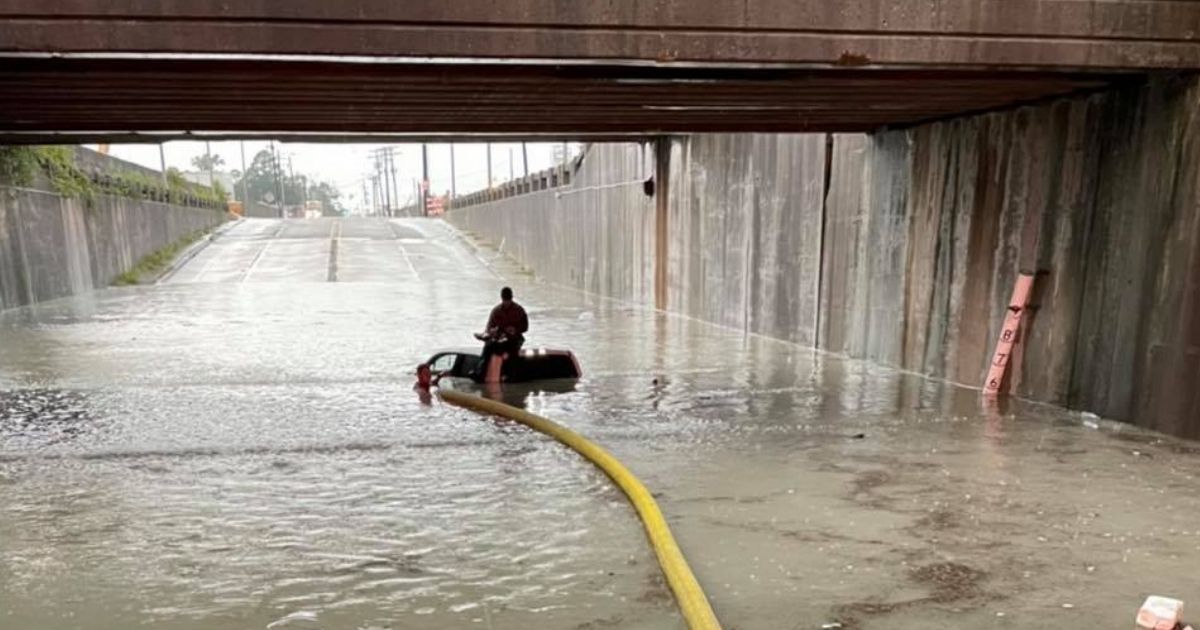 The following article, Firefighters Rescue Motorist from Floating Truck After Attempt to Drive Through Severely Flooded Underpass, was first published on Flag And Cross.

People tend to learn the pitfalls of their local areas pretty quickly, often through trial and error. You learn which streets will get you to your destination the fastest, where the worst potholes are and when lanes change abruptly.

You also tend to get a pretty good grasp on places to avoid when there’s a lot of rainfall so you can skirt flood-prone areas.

But not everyone realizes how dangerous the water can be until it’s too late.

On July 31 in Baton Rouge, Louisiana, it was an unidentified driver in a truck who managed to get stuck in a notorious state-owned underpass that was flooded.

“On Saturday July 31st BRFD crews responded to a reported MVA at the Chippewa underpass,” the Baton Rouge Fire Department shared on its Facebook page.

“Upon arrival they found a vehicle floating in the water with the driver on top.

“Efforts were made to use the ladder truck to reach the victim but it wasn’t working. Crews then inflated a section of 5 inch hose and one firefighter went out with the hose and an extra life jacket to the victim.

“The victim was successfully rescued and no injuries were reported. Outstanding job by all involved.”

The fire department credited extensive training for helping the team navigate the floodwaters. Justin Hill with the department told WAFB-TV more about the rescue.

“They tried to extend the ladder truck out to get the person back,” Hill said. “Weren’t able to do that. So they went ahead and inflated a 5-inch, you know, section of 5-inch hose and were able to float that out there, along with a firefighter and another personal flotation device to get the motorist back.”

He also took the opportunity to remind drivers to be vigilant when driving.

“It can happen anywhere if you have a large amount of water coming down at one time. And if there’s standing water, you don’t know how deep it is, it’s just best to find an alternate route,” Hill said.

Many commenters questioned why the stranded driver didn’t just swim to safety instead of waiting to be rescued by the fire department, but others chimed in to say perhaps the motorist didn’t know how to swim. Some pointed out that the water was deeper than it looked, and one even mentioned there are pumps or drains there that could make swimming dangerous.

Jake Spears, who has owned the nearby J&S Tire & Services for 13 years, says the area is known to be problematic, and he wishes the government would do something about it.

“Every time it rains, it floods out up underneath that underpass there. And cars go down there, and they got to rescue them out of there.

“It’s terrible. And they need to do something about it.”