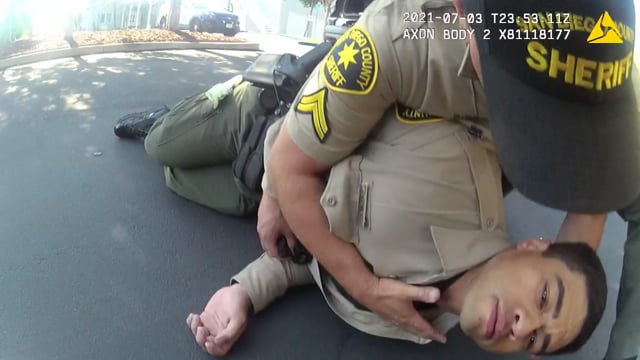 The following article, Deputy Processes Fentanyl at Drug Bust, Brush with Powerful Drug Istantantly Leaves Him on Ground Overdosing, was first published on Flag And Cross.

The San Diego County Sheriff’s Department this week shared a video of one of its officers coming into contact with the synthetic opioid fentanyl, and the situation shows just how dangerous the drug is.

One deputy who accidentally touched the substance during a recent bust barely had time to process what he had seen when he collapsed and overdosed.

On the SDCS Vimeo page, the department said that on July 3, deputy David Faiivae of the San Marcos Sheriff’s Station in the northern part of the county encountered the drug after an arrest.

Corporal Scott Crane in the department’s video said it was a routine day until Faiivae saw a white powder in a vehicle that he suspected to be drugs. It all went downhill from there.

But it was too late for Faiivae. Crane said his fellow deputy took a few steps back and collapsed.

“I ran over to him. And I grabbed him. He was [overdosing],” Crane said.

“I remember just not feeling right and then I fall back. I don’t remember anything after that,” Faiivae recalled in the video. “It was an instant. It’s as though my lungs just locked up. I couldn’t breathe.”

Luckily, officers on the force carry with them the overdose reverser drug Naloxone, of which Narcan is a common brand.

Crane was heard in the video yelling for the drug, as he knew his colleague was in a dire situation.

The corporal administered Naloxone, and despite some harrowing moments on the way to the hospital, the deputy survived to tell his story.

“If it wasn’t for the quick-thinking of his Field Training Officer, Corporal Scott Crane, in administering Naloxone, Deputy Faiivae would not be alive today,” the sheriff’s department wrote in the video caption. “The San Diego County Sheriff’s Department has used body camera footage of this traumatic incident, along with interviews from Deputy Faiivae and Corporal Crane, to create a public safety video spotlighting the dangerous and often deadly effects of Fentanyl.”

“Fentanyl continues to be one of the greatest threats facing San Diego County and the nation. This synthetic opioid is 50 times more potent than heroin. Just a few grains of fentanyl can be absorbed through the body and lead to respiratory failure and even death,” the department added.

“Fentanyl overdoses are on the rise throughout our county,” Gore said in the video’s conclusion. “Every day, deputies recover fentanyl in our communities and the county jails are not immune either to the dangers of this drug.”

A record 93,000 Americans died last year from drug overdoses amid the coronavirus pandemic, the Centers for Disease Control and Prevention recently announced.

If this officer nearly died from merely touching the fentanyl, what about Floyd who had ingested several tablets before and during his arrest?