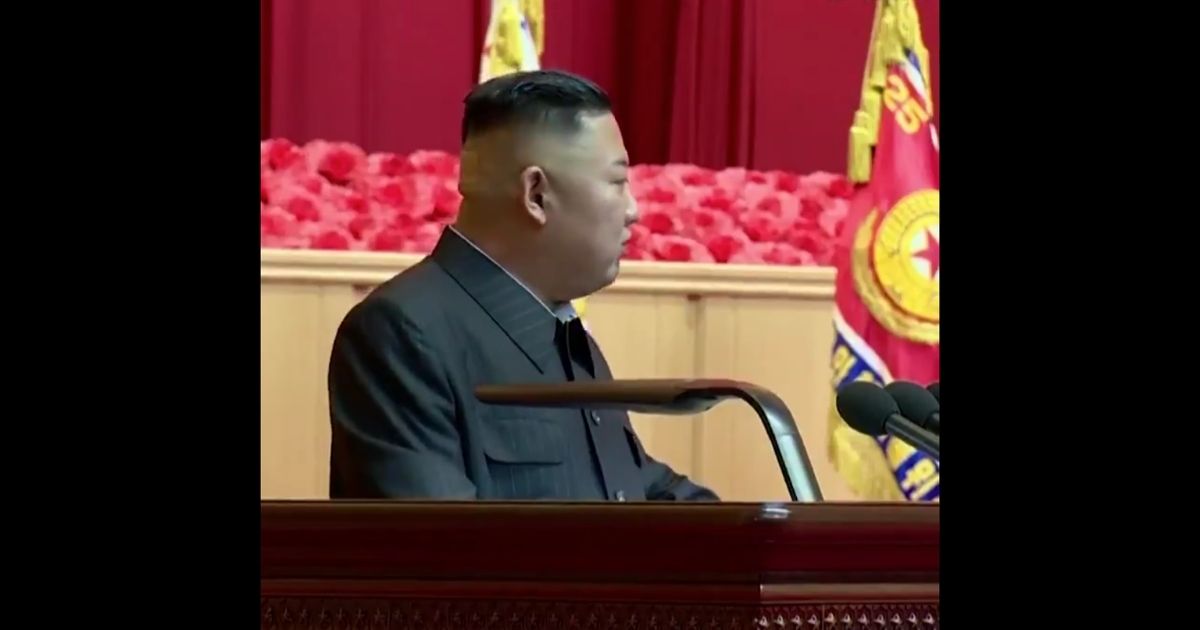 The following article, Camera Briefly Catches Back of Kim Jong Un's Head, Bandage on Back of Skull Fuels Speculation on Procedure, was first published on Flag And Cross.

Rumors have long swirled regarding the health of North Korean leader Kim Jong Un, particularly as it pertains to his battles with gout and rumors last year that he died after botched heart surgery.

Also in 2020, Kim missed the April 15 “Day of the Sun” public holiday festivities; given the anniversary of the birthday of his grandfather, Kim Il Sung, is considered the most important date in the North Korean calendar, that was considered a sign the rumors weren’t just the figments of an overactive intelligence service.

Now, a turn of the head sometime during a military meeting held between July 24 and July 27 has added fuel to the speculation.

According to a Washington Post report earlier this week, the 37-year-old dictator was seen with an oblong bandage over a large green spot on the back of his head during the meeting.

The bandage sparked new rumors some kind of surgery had taken place — and cast shadows over what had previously been seen as favorable health news for the North Korean leader.

Before the bandage was spotted, several publications noted Kim needed a new wardrobe thanks to massive weight loss.

According to the New York Post, an estimate from South Korea’s National Intelligence Service put Kim’s weight loss at roughly 44 pounds after he “was pictured in a baggy gray pinstripe suit when he greeted commanders and political officers of the Korean People’s Army in Pyongyang” on July 30.

“Recent images of the famously reclusive and rotund leader — who previously weighed 308 pounds — appeared to show that the 37-year-old has lost a large chunk of weight, sparking renewed speculation about his health.” Some sources attributed the weight loss to bariatric surgery or weight-loss medication.

However, there have been signs not all may be well.

One Pyongyang resident made news when he told state media, for instance, that Kim Jong Un’s “emaciated looks” had left him heartbroken.

Furthermore, Kim Yo Jong — Kim Jong Un’s younger sister and the presumptive heir to the North Korean leader if he dies — was the one delivering the sternest warning to South Korea over upcoming military exercises with the United States.

“For some days I have been hearing an unpleasant story that joint military exercises between the South Korean army and the U.S. forces could go ahead as scheduled,” she said last Sunday, according to The Associated Press.

“I view this as an undesirable prelude which seriously undermines the will of the top leaders of the North and the South wishing to see a step taken toward restoring mutual trust and which further beclouds the way ahead of the North-South relations,” she added.

“Our government and army will closely follow whether the South Korean side stages hostile war exercises in August or makes other bold decision.”

Kim Yo Jong has notably been providing many of her own statements on matters of world politics in recent years.

“The fact that he missed this really important event and that his younger sister, Kim Yo Jong, has been putting statements out in her own name all add credibly to this idea that he may have had a health incident,” the Washington Post’s Anna Fifield said at the time.

Others pointed to the fact Kim Il Sung had been spotted with a “tennis ball-sized” growth on the back of his head during his life. However, Kim Il Sung never had a history of health ailments, nor did anyone think he would die before his 40th birthday — at least, not of natural causes.

Whatever the case, it’s unlikely we’ll get many answers: “Insight into Kim’s health … would be the toughest to get because of North Korea’s robust counterintelligence practices,” former CIA analyst Jung H. Pak said last year.

While we might not get answers, however, the questions about how ably Kim Jong Un can lead continue to pile up.

Continue reading: Camera Briefly Catches Back of Kim Jong Un's Head, Bandage on Back of Skull Fuels Speculation on Procedure ...