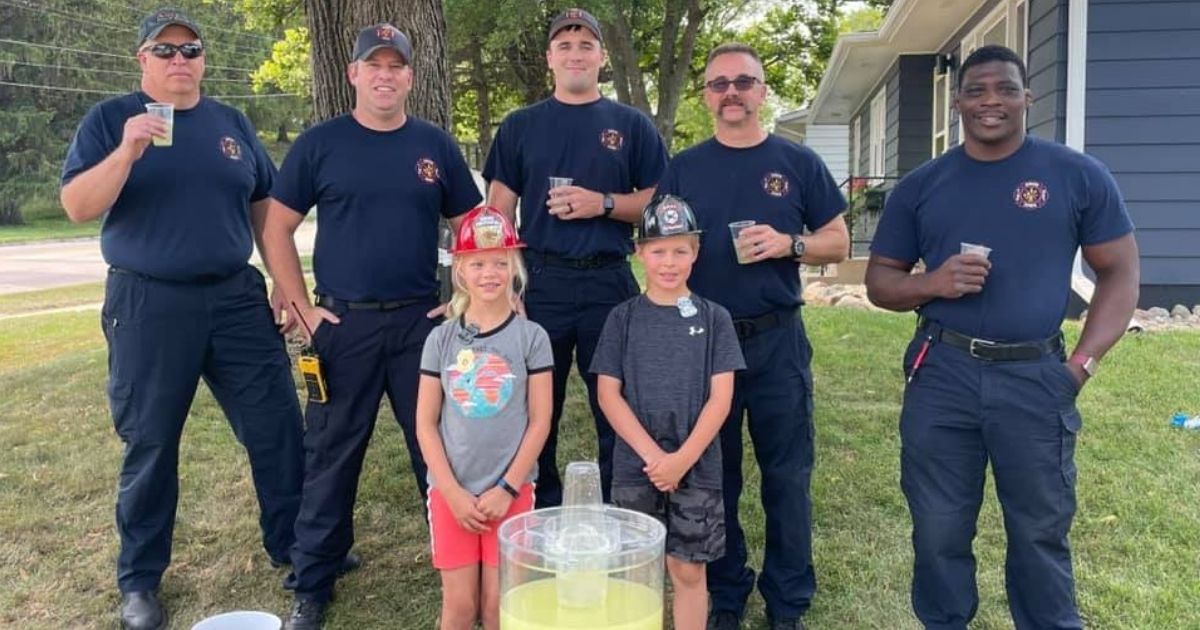 The following article, After Thief Steals Tip Jar from Twins' Lemonade Stand, Kind Police Officer Turns It All Around, was first published on Flag And Cross.

One woman’s selfish actions have been used for good after a community banded together over a lemonade stand and a noble cause.

Twins Katelyn and Elias Smidt, 9, were excited to start their lemonade stand in Ames, Iowa. On Monday, the kids got outside with their table, signs and fresh lemonade.

Things went well until someone decided to take advantage of the young entrepreneurs.

“Goodness gracious,” mom Karen Smidt shared on Facebook. “The kids have so been looking forward to having a lemonade stand all Summer. Today was THE day!! We’ve had so many amazing people stop by.

“UNTIL….one bad apple. They drove up, Katelyn asked if she wanted lemonade. The girl snatched the tip jar and jumped back in the car and squealed away…..with all the kids money.”

Smidt called the Ames Police Department to report the theft, and an investigation is underway. But when Officer Celena Rohland heard their story, she got to work sharing their tale.

Over the next few days, police officers and firefighters from area departments stopped by, and then local businesses, residents and the electric department showed up, too.

“Officer Rohland and the first responders of our community changed the tides when they showed up to show their support after the robbery,” Smidt told Fox News. “Our kids went from scared and unsure how to trust the next person…to wide-eyed, smiling and so excited to serve them lemonade.

“Our street was filled with police cars and firetrucks and a whole lot of smiles. Because of those first responders, our kids found a renewed sense of energy and wanted to open their stand the next day…and the next day. Our community showed up in a big way and we are and continue to be overwhelmed by the support.”

The kids offered free lemonade with an optional tip, announcing that all tip money would be donated to the “Shop with a Cop” program, which, according to the police department, helps disadvantaged families enjoy happier holidays.

So many people were touched by the story and wanted to help out that a Venmo account was started up. As of Thursday, the twins had reeled in a sum of $3,525.40 for Shop with a Cop.

The twins also took Thursday off, as their hard work was taking its toll.

“The lemonade stand will not open today,” Smidt shared. “These kids are exhausted and we declare today a mental health recovery day! Elias said, ‘my back hurts so bad from sitting on that chair without a back for 3 days!’

“Safe to say, no one was prepared for what unfolded this week!”

Though the twins experienced some poor behavior from the woman on Monday, they have learned how to press on and not let one bad experience get the best of them.

“Life is never without hard parts,” Smidt said. “The way our community has showed up has absolutely given our kids something they will remember for a lifetime.

“This community has shown so many what it looks and feels like to really come together.”