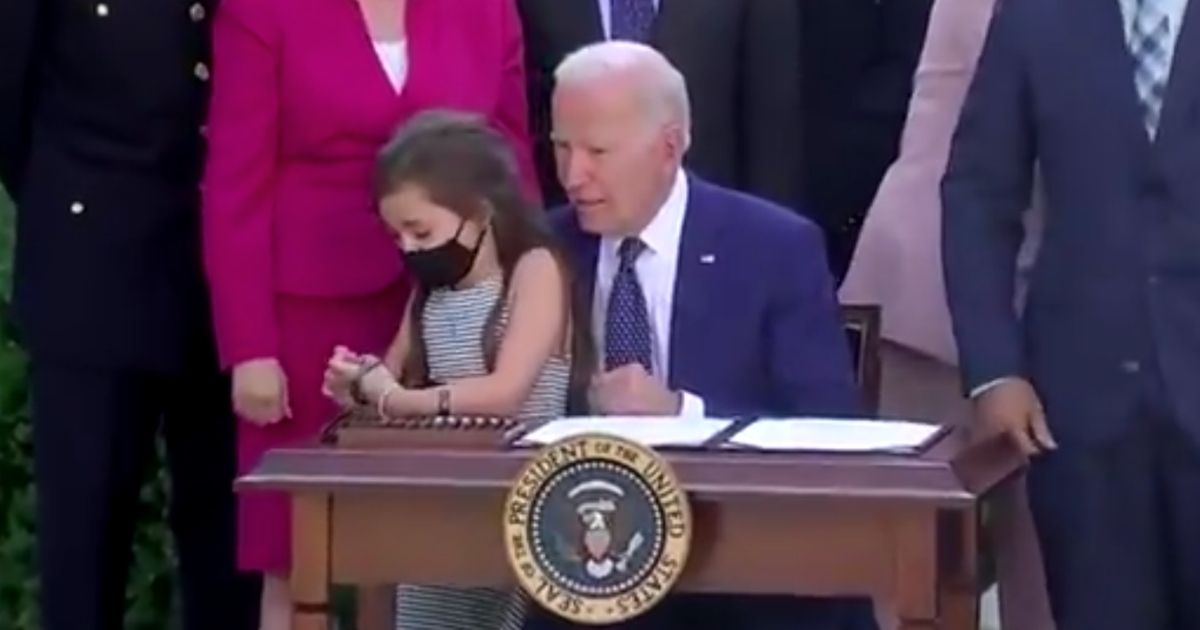 The following article, Watch: Little Girl Looks Uncomfortable as Biden Whispers in Her Ear When He Pulls Her Close to Him, was first published on Flag And Cross.

Can Biden go one week without acting like an absolute fool?

On Thursday, during a White House bill signing and photo op, Biden yet again came off like an awkward old creep when he invited a young girl to sit on his lap.

When she obliged, Biden began whispering in her ear, making the girl appear uncomfortable.

Biden spots a little girl out of the crowd, calls her over to sit on his lap, then tries to sniff her pic.twitter.com/0W0K4lADFL

The president has a history of acting strangely around young girls.

If that wasn’t disturbing enough, in this clip, Biden not only touches a young woman but smells her hair, kisses her, whispering something into her ear, only to tell her “see you back home, I hope” after visibly creeping out her and who I assume is her mother. pic.twitter.com/WrFLWmAPFJ

In this clip, Biden swears-in (R) Senator Jim Risch. During photographs, Biden touches Risch’s daughter, specifically asking to take a photo alone with her. You can hear Risch say “Dad’s going to stand pretty close.” (I wonder why?) Biden even jokes and says, “If I was young…” pic.twitter.com/LLqJ4guU0q

According to BizPac Review, the bill Biden signed into law during this latest stunt awarded congressional gold medals to police officers present at the Jan. 6 Capitol incursion, the very same riot that leftists have told us was a coordinated terrorist coup, even though it only resulted in one death (the death of Ashli Babbitt, a pro-Trump demonstrator).

In other words, Biden was peddling blatant propaganda regarding Jan. 6. There is quite a bit to be gained in doing so. For one, Biden can pretend as though Trump-supporting insurrectionists are a grave security threat to the nation.

In order to help sell this lie, children were placed all around the president to add a bit of an innocent sheen to the whole farce.

And he just couldn’t help himself. He just had to make it weird and embarrassing.

Now, many on social media are quick to rush to the typical conspiracy theories when they watch this video, arguing Biden’s actions are proof that all Democrats and establishment types are pedophiles.

That is almost certainly not the case.

However, what this episode does show is that Biden is unbelievably awkward and does not know how to conduct himself in a public setting.

Instead, this could very well be a sign of his deteriorating mental well-being.

Many critics (and even some allies) of Biden have repeatedly questioned the president’s cognitive state, given that he has repeatedly shown an inability to articulate his words and remember basic facts.

These awkward, creepy displays may very well be another sign of the president’s mental deterioration.

Someone needs to get this guy checked out by a doctor.

Continue reading: Watch: Little Girl Looks Uncomfortable as Biden Whispers in Her Ear When He Pulls Her Close to Him ...