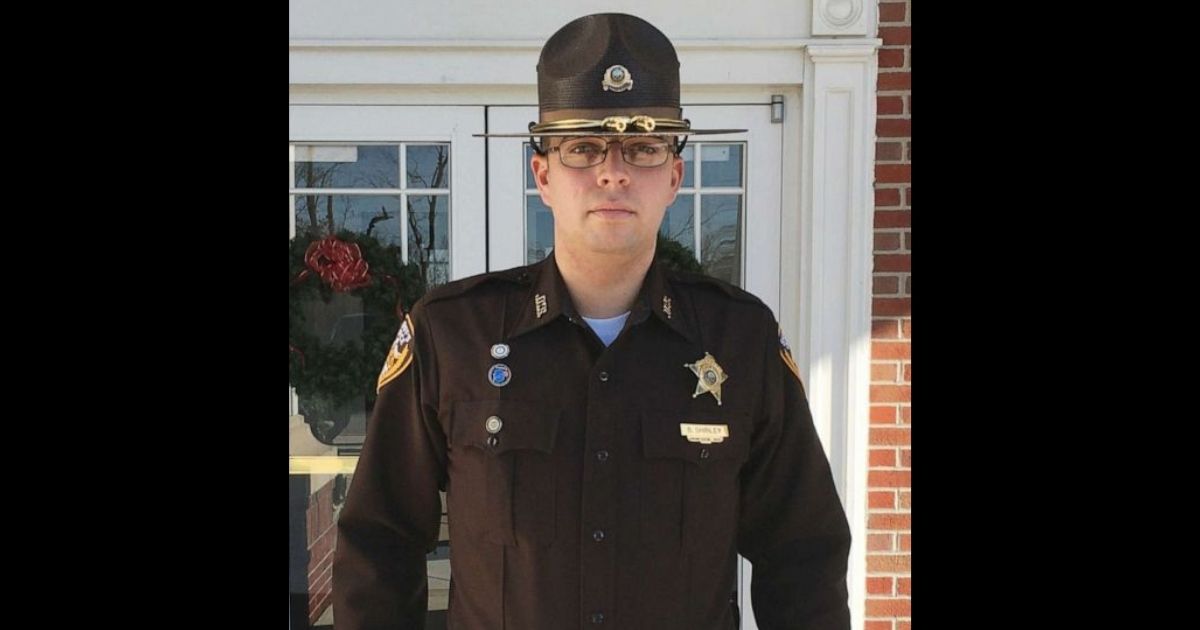 The following article, Hero Deputy Killed in Allegedly Targeted Ambush, Gunned Down While Sitting in His Personal Car, was first published on Flag And Cross.

An off-duty Kentucky sheriff’s deputy was shot and killed Thursday while providing security for a car lot as violent crime is on the rise in Louisville and across the nation.

Police believe Jefferson County sheriff’s deputy Brandon Shirley, 26, was targeted, ambushed, and attacked. No arrests have been made. The deputy received permission from the department to work for the lot, which was experiencing frequent damage and theft.

Shirley was shot while he was sitting in his own unmarked car, in uniform, outside Rockford Lane Auto Sales in Louisville around 2:30 a.m. Thursday.

When dispatchers asked him where he was hit, he replied, “I don’t know, radio, just start EMS.” A minute later, he was asked his status but did not reply.

He was taken to the University of Louisville Hospital for treatment, but later died of his injuries which included a gunshot wound to his abdomen.

“We can say with a feeling of confidence that he was targeted, and that he was ambushed,” she said. “It is just sickening. We will make an arrest.”

The deputy, who joined the Jefferson County Sheriff’s Office in March of 2019, worked in the department’s court security division. He was awarded the medal of valor for responding to the fatal shooting of a photographer in Jefferson Park last year amid the George Floyd riots.

The family of Tyler Gerth, the man killed in the shooting, issued their condolences, recounting how the brave deputy ran toward the crowd as gunshots broke out and tried to provide first aid to Gerth.

Shirley previously worked as an EMT before joining the sheriff’s department.

“The family is still dealing with the shock,” said Yates, who also told the Courier-Journal Shirley was alert and talking when he arrived at the hospital, only to later succumb to his injuries. “One minute they’re thinking he’s going to make it and then he’s gone.”

Shields did not disclose why her investigators were confident Shirley was targeted during Thursday’s briefing.

“For police, if someone is really determined to kill you, they’re going to kill you,” she said. “And that was the case here.”

Offering his condolences and prayers for Shirley’s family, Kentucky Sen. Rand Paul, a Republican, called out those who stir up vitriol against members of law enforcement.

I call on those who direct hatred and anger toward our police to realize there will be consequences to words and actions when directed against law enforcement.

“I call on those who direct hatred and anger toward our police to realize there will be consequences to words and actions when directed against law enforcement,” Paul tweeted.

It is, of course, unclear why Shirley was targeted, but the grief felt by his family, colleagues, and community certainly ought to stand as a reminder that American members of law enforcement are not faceless, soulless storm troopers like the increasingly hostile rhetoric of the radical left would have you believe.

They are not only human beings whose lives matter, but they are also brave men and women who willingly sign up for a job that places their lives at risk for the sake of preserving the lives of others.

Many, like Shirley, run towards danger when laypeople would run away in fear and are willing to do whatever they can to protect and defend.

It appears Shirley, like the members of the Los Angeles Sheriff’s Department who were targeted in a cruel ambush attack when the post-George Floyd culture wars were still raging last year, was targeted and shot like a sitting duck in his vehicle as he tried to prevent damage or theft of someone’s private property, i.e. the source of their livelihood and means of economic survival.

The progressive left loves to talk about housing, food, health care, and a substantial wage as things that should be guaranteed human rights, but they routinely attack those who choose as the source of their own livelihood to protect lives, property, and businesses from theft and destruction.

How does that make sense?

Whatever the motive in this attack may have been, there is no denying that crime is glorified and celebrated by our popular culture, and members of law enforcement are constantly demonized and dehumanized by progressive political figures.

Paul is absolutely correct — those who leverage resentment toward members of law enforcement ought to very seriously consider the real human cost of their hatred and rage. They will also have to live in the broken, dangerous, lawless society their rhetoric is capable of producing if their quest to destroy the thin blue line is ultimately successful.