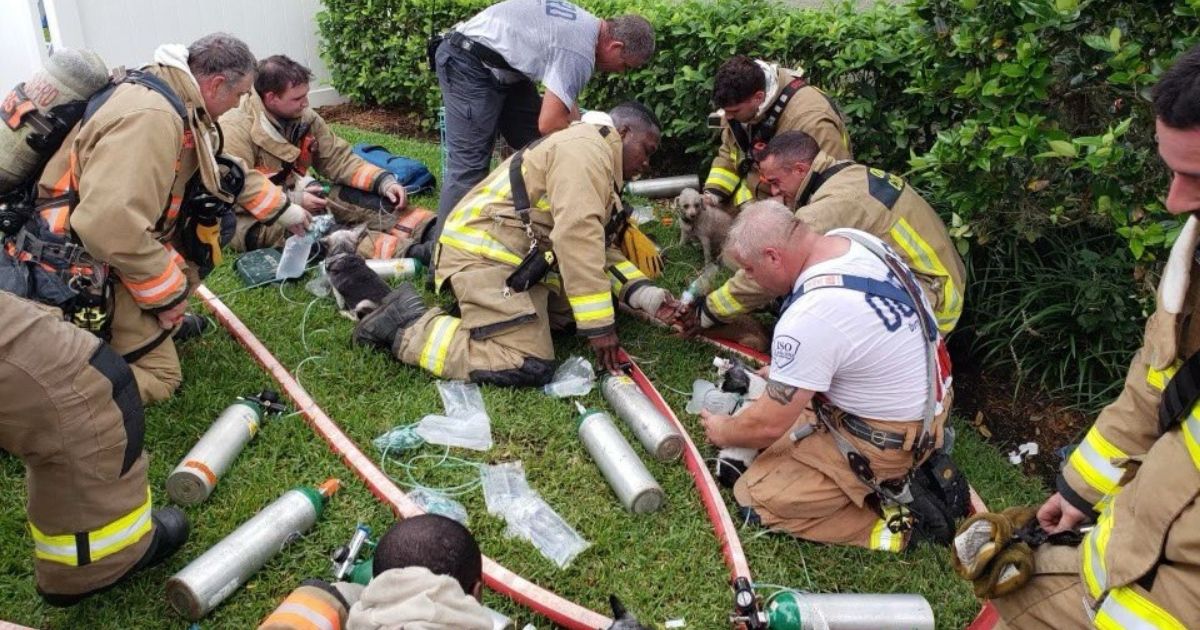 The following article, Florida Firefighters Rescue 7 Pups from Unoccupied Home – Cause of Fire Unknown, was first published on Flag And Cross.

A fire broke out in a home east of Orlando, Florida, while the owner was away Wednesday. There were no people in the home, but there were dogs — seven in total.

Around 4 p.m., firefighters were on the scene and realized the dogs were inside, but at first they didn’t realize how many. They quickly extinguished the fire.

“4 dogs found inside and rescued. Search still on for 1 dog. No injuries.”

House Fire 12783 Tanja King Blvd. Smoke showing upon arrival. Fire is out. No occupants in the home. 4 dogs found inside and rescued. Search still on for 1 dog. No injuries. pic.twitter.com/Wy4CI4oVm4

There were still three dogs trapped inside, and two of them were in rough shape.

Based on photos shared by the department, most of the dogs were small, including miniature poodles and Chihuahuas.

Photos show firefighters working on assisting the pups on the grass near the home, giving them oxygen in an attempt to revive them.

“UPDATE: A total of 7 dogs were rescued from the home,” the fire department tweeted about an hour later. “2 are critical. @OCAS_Orlando en route.”

UPDATE: A total of 7 dogs were rescued from the home. 2 are critical. @OCAS_Orlando en route. https://t.co/HquaA4ze59 pic.twitter.com/doVqLUzioS

According to the Orlando Sentinel, Bryant Almeida, spokesman for Orange County Animal Services, connected with the dogs’ owner, who is away. A neighbor is caring for the five uninjured dogs.

The owner’s sister took the two dogs in critical condition to a local emergency clinic, where they are being treated. No update on their condition has been given, and the cause of the fire was “not immediately clear,” according to Fox News.

The American Kennel Club says there are several things you can do to ensure your pet’s safety in the event of a fire other than things you would normally do for your own human family’s safety (like keeping smoke detectors updated and having an escape plan).

Many groups recommend buying pet alert window decals that are specifically made to help firefighters in this sort of situation. The decals are only good if they’re kept updated, so remember to keep the number and type of pets current.

The AKC also mentions that if you have waggy or exuberant dogs, be cautious with your placement of lit candles. Additionally, some dogs have been known to bump stove knobs in the pursuit of something tasty or just during exploration, which could easily lead to a fire.

The group also advocates having an emergency kit for your pet located outside of your home and keeping an eye on cords if your dog is prone to chewing.

You never know when a fire might start in your home, and it never hurts to be prepared — especially when your animals are depending on you.