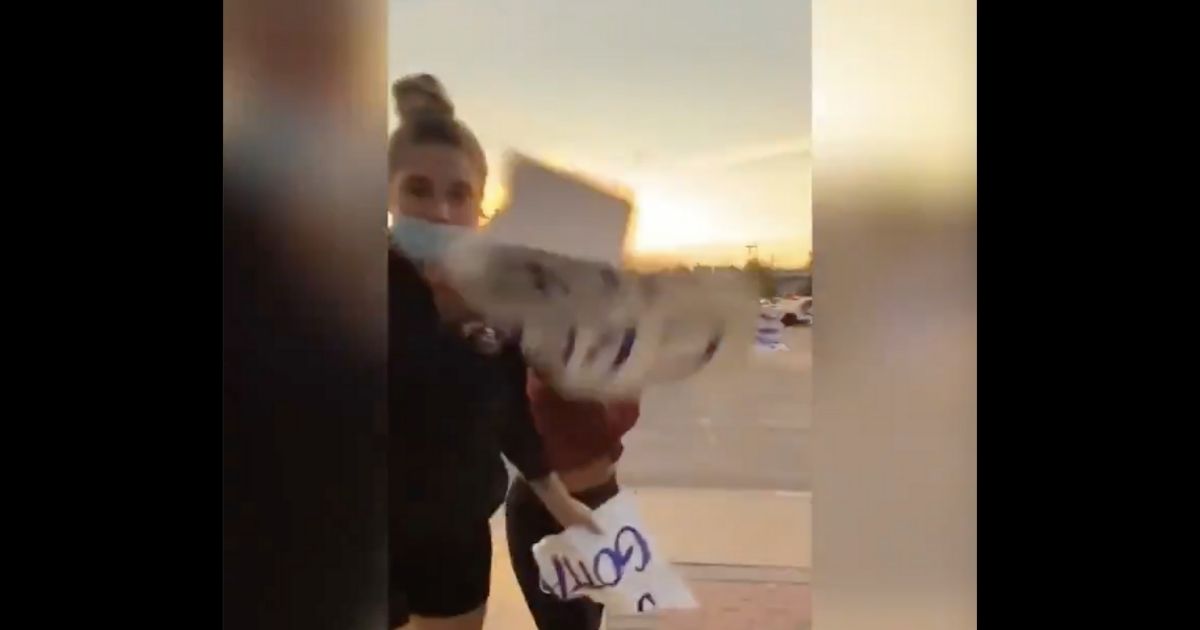 The following article, Despite Pleading Guilty to 'Hate Crime' Against Trump Supporter, Women Will Not See Jail Time, was first published on Flag And Cross.

The Delaware News Journal reported Wednesday that Olivia Winslow and Camryn Amy, both of Wilmington, have pleaded guilty to “misdemeanor charges of theft, child endangerment and hate crimes.”

“Other charges including assault, attempted assault and conspiracy were dropped by prosecutors as part of the plea deal struck Monday” the news outlet added.

Winslow and Amy were both 21 years old when the incident happened on Aug. 20, 2020, the night of President Joe Biden’s speech in Wilmington accepting the Democratic presidential nomination.

Victims Riley and his mother, Abbey, were confronted by the two women as they waited to be seated at a restaurant, by Abbey’s account.

“We were standing outside peacefully minding our own business waiting for our table,” she wrote in a statement at the time.

“Suddenly, two Joe Biden supporters began to yell political epithets at my child. They ripped the sign from my arms and assaulted my seven year old son. The Joe Biden supporters laid hands on my child and ripped his ‘Make America Great Again’ hat from his head while cursing at him and pushing him over.”

“I was punched in the face multiple times by Joe Biden supporters,” Abbey wrote.

“My friend who joined me and attempted to defend us was punched in the face multiple times by the Joe Biden supporters. They beat me with their fists and purses.

“They stole my sons hat and threw my 7 yr old son’s hat over the fence into a dirt filled construction site where we could not retrieve it.”

The video of the incident posted by Students for Trump, which went viral, shows Winslow and Amy tearing up paper signs and then taking a MAGA hat.

Riley chases after the women trying to get the hat, saying, “That’s somebody else’s hat.” He then begins to cry.

Because he was simply showing his support for President @realDonaldTrump.

A man later arrives, demanding the hat back, but one of the women holding it instead shoves him and takes a swing at him. She ultimately throws the hat over a construction site fence.

Based on the sentence the attackers received, the pattern of Democrats and other leftists getting off lightly apparently continues.

Politico reported in April that several charged with federal felonies in connection with last summer’s Portland riots were allowed to enter into “resolution agreements” only requiring community service.

“[P]rosecutors have approved deals in at least half a dozen federal felony cases arising from clashes between protesters and law enforcement in Oregon last summer. The arrangements — known as deferred resolution agreements — will leave the defendants with a clean criminal record if they stay out of trouble for a period of time and complete a modest amount of community service, according to defense attorneys and court records.”

American Greatness writer Julie Kelly contrasted the leniency the so-called social justice protesters in Portland received (many of whom attacked federal officers and damaged federal property) with the harsh treatment for those involved in the Jan. 6 incursion into the U.S. Capitol.

“I think what the American people need to know is that the U.S. government, Joe Biden’s Justice Department, is holding political prisoners in a jail in Washington, D.C., that has been opened up specially to house Jan. 6 defendants awaiting trial. They’ve been denied bail. They’re living in harsh, almost solitary confinement conditions in this jail,” Kelly told Fox News host Mark Levin in June.

“They’ve arrested almost 500 people now, mostly for misdemeanor charges related to what happened on Jan. 6,” Kelly added. “This is a political persecution against Trump supporters.”

CBS News reported Wednesday that at least 557 defendants have now been charged in connection with the incursion.

A few have received probation after pleading guilty to entering the Capitol without authorization, but harsher sentences are being be doled out, including jail time.

Obviously any who engaged in violence against police officers or destroyed public property must pay for their crimes.

But the vast majority were just there to protest. Of the hundreds of thousands of Trump supporters in D.C. that day, only hundreds entered the Capitol and a much smaller subset of them engaged in violence.

Lady Justice must be blind to political affiliation. Right now it feels like she’s not.

“Justice for all” means no free pass just because you are a Democrat.

The scum on the Left may soon be assaulting and harassing conservatives because this demonstrates that they will pay little to no penalty for doing so. The end result will be conservatives using deadly force to protect their children and themselves. If it continues, the judges allowing this to happen will probably be targeted for their complicity in encouraging violence against the innocent.