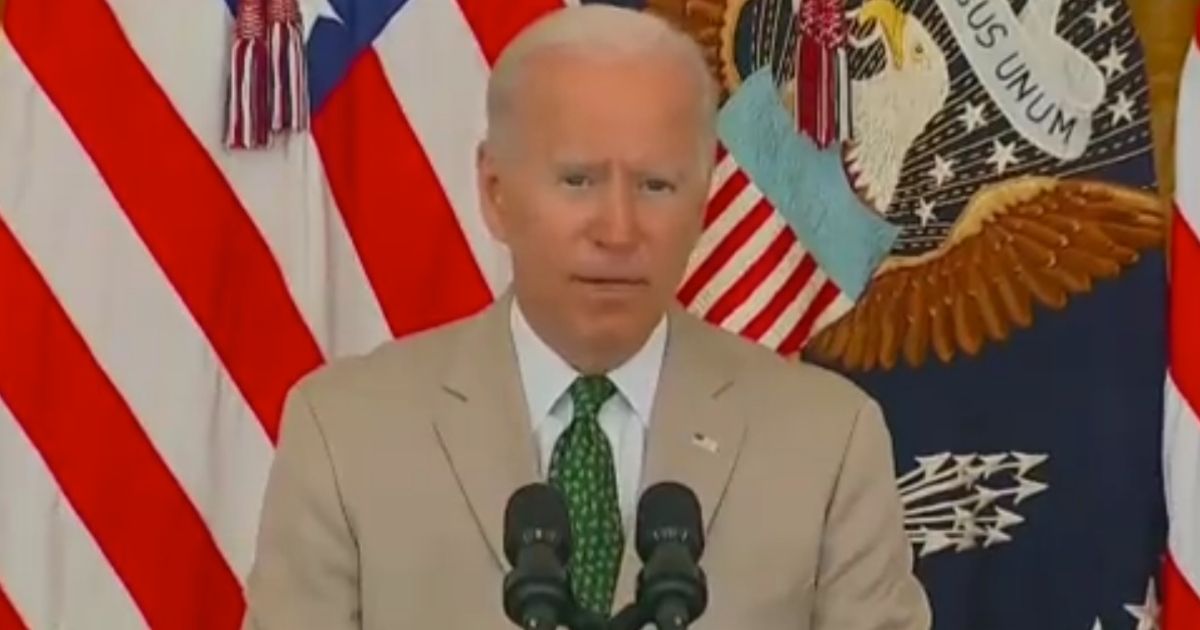 The following article, Biden Checks Notes, Then Says 350 Million Americans Are Vaccinated, More Than US Population, was first published on Flag And Cross.

President Joe Biden is not so good with math.

Or maintaining a singular train of thought.

Come to think of it, there’s not a whole lot he is good at, other than perhaps having a recognizable, Democratic establishment name and not being the Orange Man.

He is undeniably talented at being someone other than President Donald Trump, that’s for sure. How good of a thing that remains to be seen, but the border crisis, inflation and an unconstitutional eviction moratorium don’t bode well.

This week, as Biden was making yet another attempt to urge those Americans who have so far resisted the COVID-19 vaccine for whatever reason to overcome their “hesitancy,” he incorrectly stated the number of Americans who have compliantly gotten the jab.

In fact, according to his figures, over 100 percent of the American population has been vaccinated, so you’d think he’d have nothing to worry about.

“We have to get more people vaccinated,” he said. “Well over … what’s the number again, I have to remind myself,” he continued, checking his notes.

There are only 328 million people in the United States. pic.twitter.com/mdJ2VRCp8c

Three hundred and fifty million is well over the entire population of the United States, as it happens, which sat around 328 million in 2019.

So “well over” the figure that Biden has would be considerably more people than there are residing in the whole of the country.

Maybe he’s including the tens of thousands of illegal aliens who have crossed the border since his tenure began?

This whole snafu wasn’t helped at all by the fact that he was wearing a tan suit — something for which President Barack Obama got roasted when he sported a similar look during his time in office.

This is not the first time that Biden has dramatically exaggerated such a figure while trying to make a point.

During the presidential primaries, Biden declared that 150 million people had been killed by firearm violence since 2007, which is almost half the population of the United States.

In reality, as the total number of gun deaths recorded in recent years is in the tens of thousands, the real figure Biden was trying to cite may not even reach 500,000, let alone 150 million.

The perpetually confused Biden was probably citing the total number of vaccine doses that have been administered in the United States, as per CDC data, as the New York Post pointed out, which were given to roughly 193 million people.

This is about 70 percent of American adults.

It’s perfectly understandable for anyone to flub figures now and then, but how does the president of the United States hear a figure slip out of his mouth and not recognize it as exceeding the population of the nation he’s governing?

Biden routinely displays symptoms of not only incoherence but also potential senility, as it happens.

During the campaign, he’d forget where he was. He was accused of using a teleprompter for live TV interviews.

After taking office, he once forgot not only what the Pentagon was called, but what the secretary of Defense was called and who he’d appointed to the position.

His handlers are known for trying to shoo him away from reporters, and White House Press Secretary Jen Psaki has admitted she doesn’t like him talking to the media on his own.

This was plainly evidenced by the fact that he well exceeded a 100-year record for the longest that a president has gone without giving a solo news conference and needed the aid of handy reference cards when he finally gave one.

It’s like he’s actively trying to fuel rumors that he’s slipping into dementia at this point — that is, if he’s not actually already well down the path of cognitive decline.