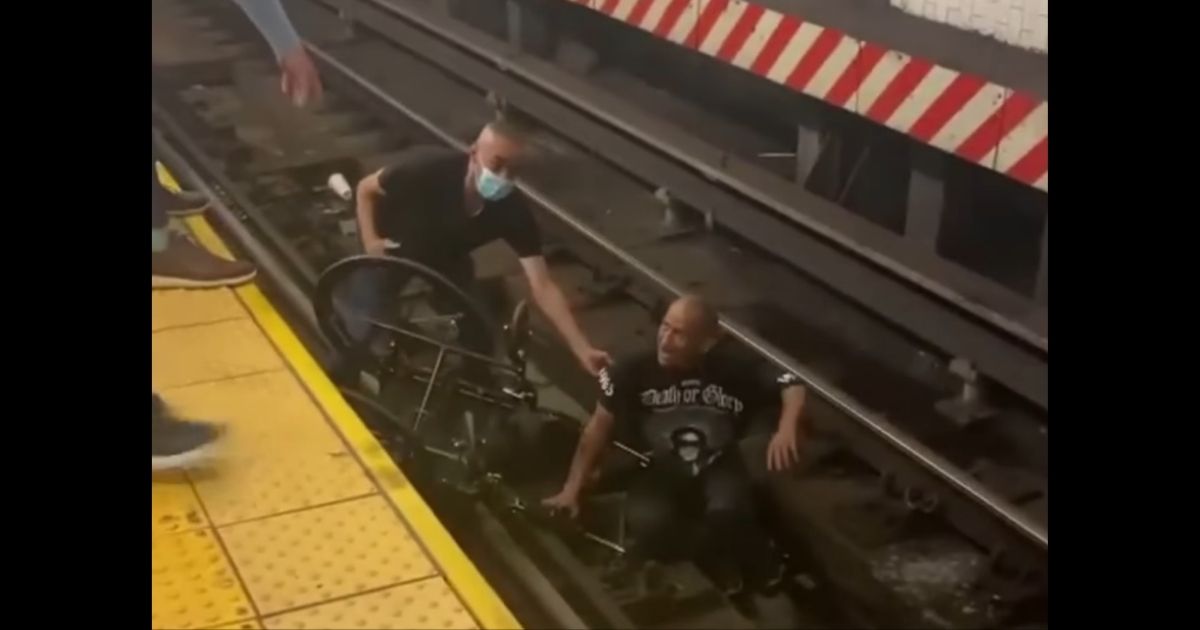 The following article, Video: Good Samaritans Come Together to Rescue Man in Wheelchair Who Fell Directly Onto Tracks as Train Approaches, was first published on Flag And Cross.

Anywhere commuters travel by train, there is the potential for harm, considering the dangers associated with people being around any type of large machinery.

While physical barriers and emergency procedures have been put in place along many train tracks and platforms, there is still an inherent risk, and people are frequently being warned to remain behind the caution line and stay off the tracks.

On Wednesday in New York City, a man using a wheelchair fell onto the subway tracks at Union Square station as the 6 train was approaching at around 1:15 p.m.

Thankfully, people heard him whimper and saw him lying on the tracks.

One man jumped down beside the victim, tried to lift him up and briefly checked down the line before hoisting the wheelchair up on the platform.

Then, the announcement for the approaching train came over the speakers.

“There is a downtown local 6 train to Brooklyn Bridge/City Hall approaching the station,” the announcement said. “Please stand away from the platform edge.”

People on the platform reached out to the victim and pulled him to safety while the good Samaritan helped push him up from the tracks below.

The quick-acting hero was then offered hands and hauled up by the other bystanders. As he was drawn up, the sound of the approaching train started to fill the station.

WCBS-TV’s Lauren Mennen was at the station and caught it all on cellphone video. When she realized what was happening in front of her, she started recording.

“One man jumped right into action,” she said. “He didn’t think twice whether he was going to go on those tracks.

“I was like, people need this. There’s heroes in action and I was like I’m going to wave my hand at the train and it will all be good. I hope people just take positivity away from all this.”

Some viewers criticized Mennen for recording instead of helping, but there were many people already on the job. If any more had tried to join in, there could have been a confused jumble, and the man’s life could have been risked further.

As it was, the victim had all the help he needed and was safe by the time the train arrived — but if his rescue had taken any longer, the good Samaritan and he could have been in serious jeopardy.

The man was taken to Bellevue Hospital after sustaining non-life-threatening injuries.

Many have appreciated seeing this snippet of human kindness and action.

“It’s great to see people helping people for a change,” commenter Corey Harris wrote on Facebook. “There are wonderful people out here in this crazy mixed up world.”

“It’s good to see that there are still good hearted people in this world in need,” Janice Ullrich added. “God bless them for saving this person.

“No hatred, no racism, just caring people. We need all people to be kind to one another, not in any crisis, just human kindness before it’s too late.”

Continue reading: Video: Good Samaritans Come Together to Rescue Man in Wheelchair Who Fell Directly Onto Tracks as Train Approaches ...