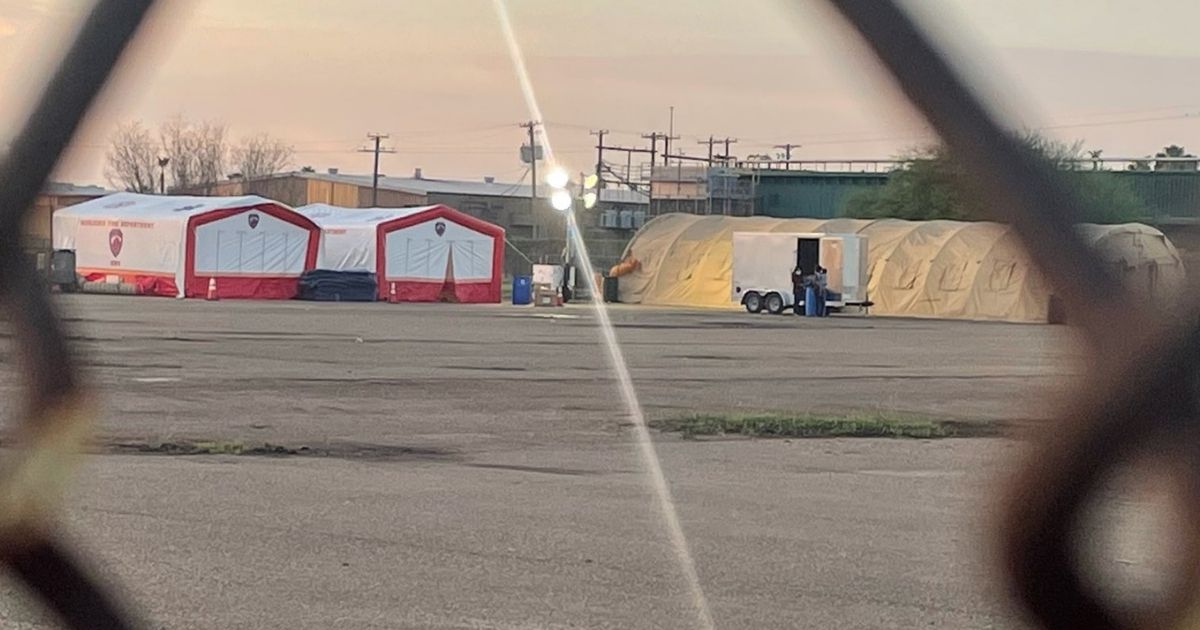 If President Joe Biden’s administration wants to control COVID-19 and its variants as much as it says it does, it would close the border.

It doesn’t care that much, however — which is why McAllen, Texas, the Rio Grande Valley city at the epicenter of the border crisis, has started constructing emergency shelters for illegal immigrants released after being taken into custody by U.S. Border Patrol.

According to a report from Fox News’ Bill Melugin, the city began building the shelters after it said the Border Patrol was releasing “an alarming number of immigrants into McAllen, and that the feds aren’t testing them for COVID.”

BREAKING: The city of McAllen has started constructing emergency shelters for illegal immigrants released by Border Patrol. The city says the federal government is releasing “an alarming number of immigrants into McAllen, and that the feds aren’t testing them for COVID. @FoxNews pic.twitter.com/hy9TbKtgCM

“Faced with a rapidly escalating surge of immigrants at the Texas-Mexico Border, the City of McAllen’s Emergency Management Office, in coordination with City Management and in accordance with the Mayor’s Declaration of Local Disaster executed on August 2, 2021, took swift action to begin its efforts to mitigate emergent health and safety risks,” the city said in a statement.

“In response to these actions, by an overwhelming majority, the McAllen City Commission ratified and gave further specific instruction to the Emergency Management Office and City Management, through the Mayor’s Disaster Declaration to request that Hidalgo County erect temporary emergency shelter on property in McAllen on 23rd Street for the overwhelming number of immigrants stranded in McAllen by U.S. Customs and Border Protection.

“The City Commission also instructed City staff to demand relief from the federal government for the alarming number of immigrants that are being released into the city of McAllen. The Commission further instructed staff to assist local non-governmental organizations to swiftly expand their operations, including identifying additional locations for emergency shelter should the need arise.”

On Wednesday evening, McAllen officials announced the location of the temporary emergency shelters, which are meant to house COVID-positive illegal immigrants, would be moved from McAllen proper to a property by Customs and Border Protections’ operations center, according to KVEO-TV.

The situation in McAllen has been at a breaking point for some time now. Last week, Melugin’s team reported on the chaotic rush to get the illegal immigrants taken into custody in the Rio Grande Valley on buses and planes and away from the clogged border.

McAllen is the processing point for the Rio Grande Valley Sector, the locus of the current migration crisis. The sector covers the entirety of Texas’ coast on the Gulf of Mexico, as well as the border at the southern tip of the state, where Texas is only separated from Mexico by the Rio Grande.

Earlier this week, Melugin tweeted that Fox’s crews were “witnessing the mass release of migrants in downtown McAllen today. Border Patrol buses and vans are pulling up every 15 minutes.

“Agents tell us it’ll be happening all day long. Hundreds released so far. Most going to the McAllen bus station. [Border Patrol] overwhelmed.”

We are witnessing the mass release of migrants in downtown McAllen today. Border Patrol buses and vans are pulling up every 15 minutes. Agents tell us it’ll be happening all day long. Hundreds released so far. Most going to the McAllen bus station. BP overwhelmed. @FoxNews pic.twitter.com/kStwQOV2NI

Last month, Melugin’s team reported that the Border Patrol was dropping the illegals off at a bus station after processing, where many were waiting at least two days for tickets to the interior of the United States.

Individuals and families are usually released with “notices to appear,” or NTAs, which inform them where and when to appear in court. However, the Department of Homeland Security has acknowledged at least some individuals have been released without them.

NEW: Our FOX drone team in the Rio Grande Valley shot this video of Border Patrol dropping off bus loads of migrants at McAllen Central Bus Station where they are given bus tickets to travel out of town after they are processed & released from custody w/ NTA’s. @FoxNews pic.twitter.com/xbsvrRKwid

According to Border Report, which covers issues pertaining to border security and illegal immigration, the nonprofit organizations that have been managing the overflow in recent weeks are no longer able to cope.

The nonprofits, including Catholic Charities, “were literally at capacity and for the first time since I can recall, and I think ever, they actually turned some people away, which basically brings the issue that we’ve been trying to avoid now from the beginning and that is to have immigrants on the street, sleeping on sidewalks and so on,” Rodriguez said.

Sister Norma Pimentel of Catholic Charities said she asked Border Patrol to stop sending migrants. However, that didn’t stop the buses from coming. While one church took in 300 illegal immigrants and the Salvation Army housed 100 more, that still wasn’t enough.

“Thank God we have other locations, churches, step up,” Pimentel told Border Report. “I’m working with other people who are stepping up and saying, ‘We can help.’”

That isn’t solving the problem, though. COVID-19 rates for released migrants were reported to be over 10 percent in the area, according to Border Report.

In the McAllen-area city of La Joya, illegal immigrants being housed in a hotel were allowed to leave their rooms, leading to reports of sick migrants eating at local restaurants without masks on.

“Pimentel told Border Report that the situation ‘has been corrected’ and a security guard was hired at the hotel to keep the migrants inside,” the outlet reported.

Those in the McAllen area are responding to the crisis in different ways — including the tent facility to house the flow of illegal immigrants.

“Despite the City of McAllen and its community partners’ best efforts, the sheer number of immigrants being released into the city has become a crisis: a crisis the City of McAllen did not create and has proactively tried to avoid for seven years,” the city’s statement read.

“Now, with the drastic, unexpected increase of immigrants arriving to McAllen, the City Commission’s first priority is to protect the health and safety of the residents they serve,” it added. “The City of McAllen, known for its safety and security, did not create nor invite this crisis, but it will swiftly respond and take every action within its power to protect the health and safety of its residents.”

The Biden administration can help clamping down on illegal immigration and the importation of COVID-19.

The fact it steadfastly refuses to do so indicates where its priorities lie.