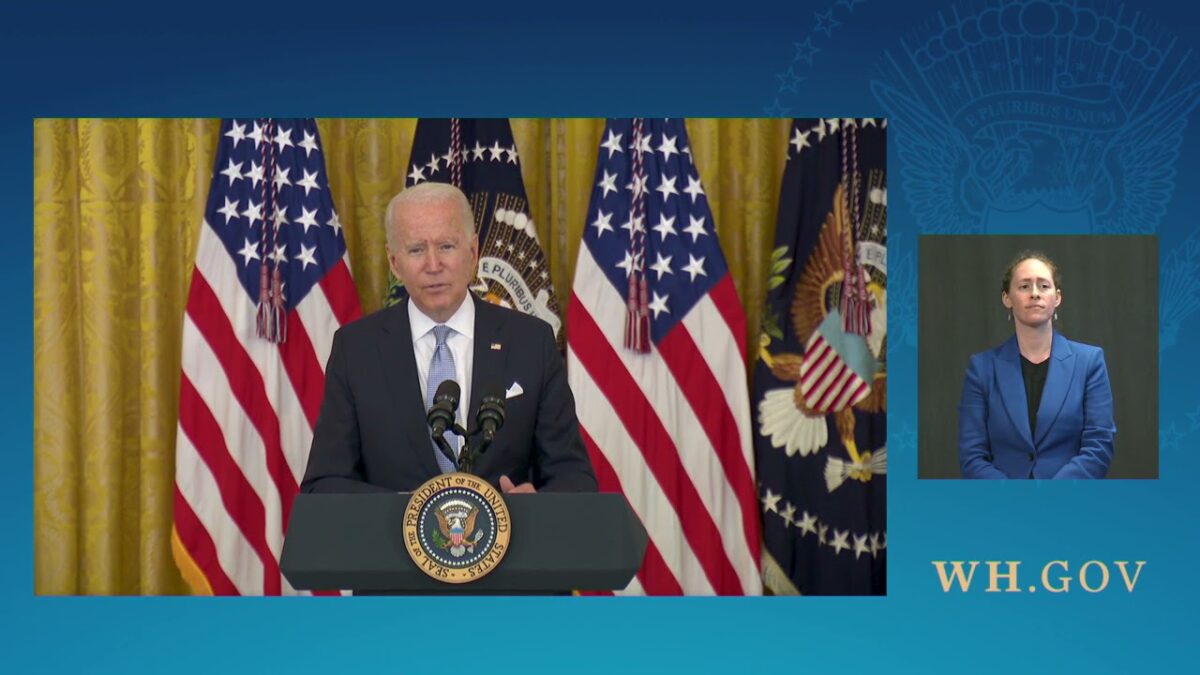 The following article, While CDC Now Ranks It in 2nd-Most-Dangerous Category, Biden Said Last Week People Can Unmask in New Castle, DE, if They Want To, was first published on Flag And Cross.

President Joe Biden’s remarks Thursday at a White House briefing on ways to incentivize Americans to get vaccinated were an illustration of just how quickly conditions change with the coronavirus — and how confusing the government’s messages actually are.

Pulling off his familiar black face mask, Biden stood before a podium and the dual microphones where he would begin speaking.

“Good afternoon,” he said, according to the White House transcript. “Today, I want to talk with you about COVID-19.”

Biden then saw fit to reflect on one of the biggest hot button issues that’s plagued America since the dawn of the pandemic, holding his now-folded mask a little higher to illustrate his point.

“Maybe the best way to start is: In a significant part of the country, you wouldn’t have to take one of these off, you don’t have to put one on,” he said.

“Like in my home state of Delaware where I live in New Castle County, where I was yesterday in Pennsylvania, because people got vaccinated.”

“They don’t need a mask when the majority — the vast majority of people — got vaccinated.”

Well, that statement aged poorly. It was only a day later that New Castle County’s status was changed by the Centers for Disease Control, according to WDEL.com. The risk of infection there is now considered “substantial,” the CDC’s second-most dangerous category.

The county was in the “moderate” category on the day Biden spoke.

As the delta variant becomes a driving force behind the nation’s bolstered COVID-19 restrictions, enhanced — or even reinstated –mask protocols have come our way yet again.

The narrative keeps changing. Is it safe to go maskless? Are those who’ve been fully vaccinated protected against this highly contagious variant? Will we ever turn the corner and conquer this virus?

It seems our nation’s officials are dangling our older and freer ways of life before our faces, telling us to consider them a reward if only we do as they tell us.

Even then, that can’t be counted on.

On its face, Delaware presents a solid image of the administration’s vaccine goals.

With the CDC indicating that 61.7 percent of the First State’s residents have been fully vaccinated — including 92.9 percent of those 65 and older — it’s clear Delaware has been making progress.

How is it faring?

The same COVID Data Tracker that tells us that 61.7 percent of Delawareans have been fully vaccinated also tells us that the entire state was in the “substantial” risk level of community transmission between July 26 and Aug. 1.

As the delta variant surges, no one can say if those numbers are going to fall any time soon.

Not to mention, graphs on the data tracker page show the number of cases has risen by 96.26 percent in the last 7 days. COVID-related deaths were listed at 59 in the past seven days,  and the percentage of ICU beds reserved for COVID patients has slightly increased in that timeframe as well.

It’s true that one graph shows COVID-related hospital admissions have fallen by 56.25 percent within the last week in the area. However, we’ve yet to see whether the delta variant will tighten its grip on New Castle County — and Delaware in general — in the upcoming days and weeks.

Though New Castle County didn’t join the “substantial” category until Friday, Biden — or his advisers — should have seen how the numbers were trending when he spoke just a day before the county’s category was upgraded.

Just imagine the uproar if former President Donald Trump had made an identical remark in front of the media, one day before an area was declared more dangerous.

Imagine how “irresponsible,” how “misleading” he would be considered by the establishment media if he’d touted going maskless in an area that slipped into the “substantial” virus spread category only a day later.

Biden would never face the kind of treatment Trump got routinely, but he’s not getting the kid-glove treatment he enjoyed in the early days of his presidency, on this topic at least.

Biden’s attempt to chalk up going maskless as an incentive for getting vaccinated even fell flat with CNN.

“Just because you live in an area where the majority of people have been vaccinated does not necessarily mean you ‘don’t need a mask’  in certain situations,” the network’s Tara Subramaniam wrote in a “Facts First” column.

“The latest mask guidance from the Centers for Disease Control and Prevention is based on the level of transmission and Covid-19 case rate in an area, not specifically the rate of vaccination, which Biden noted later in his remarks.”

Still, why lead off with the notion that high percentages of vaccinated residents equal shedding the masks?

On Friday, Delaware Gov. John Carney said he isn’t considering a new mask mandate in light of recent changes and would rather focus on getting more residents vaccinated, according to WDEL

That’s subject to change, of course. If we’ve learned one thing from the pandemic, it’s that the only thing that stays the same is everything changes.

We can demand that our top officials get their facts straight or at least stick to a linear narrative going forward all we want, but that has changed nothing so far.

All I can say is, Biden should choose his words more carefully next time. Or at least make sure he knows what he’s talking about.

Continue reading: While CDC Now Ranks It in 2nd-Most-Dangerous Category, Biden Said Last Week People Can Unmask in New Castle, DE, if They Want To ...