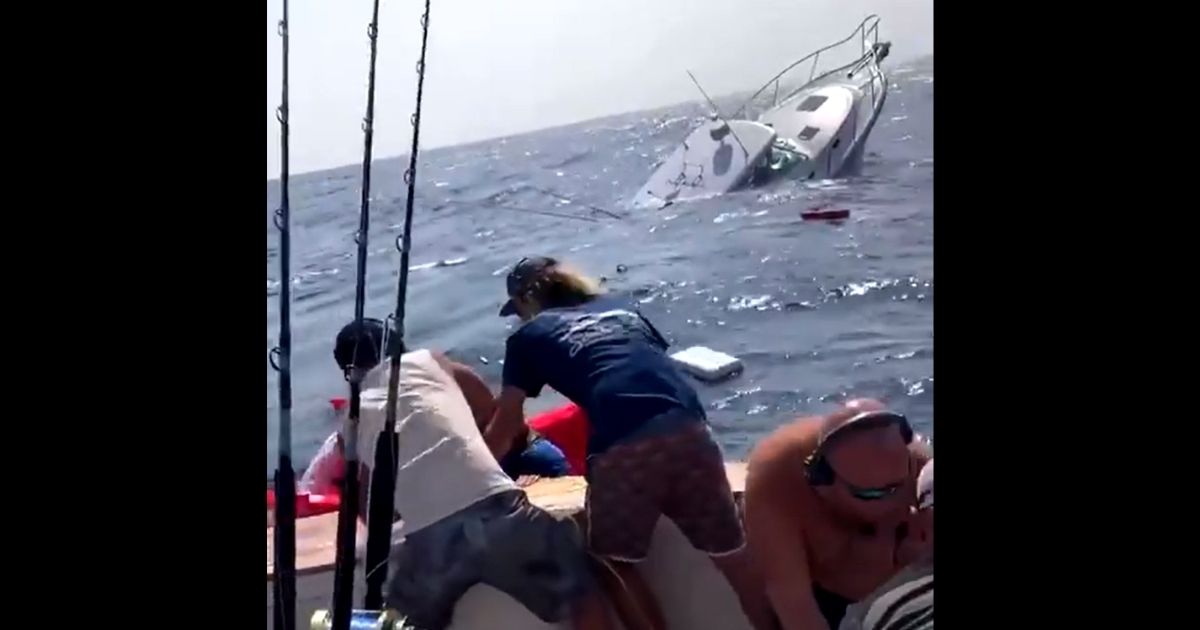 A deep-sea fishing tournament turned into a rescue mission after one of the boats taking part in the competition began to sink Monday.

Knot Stressin and Fishbone were two boats that were taking part in the White Marlin Open in Ocean City, Maryland.

Knot Stressin was about 60 miles offshore when it began to take on water, according to WBOC-TV.

According to a Facebook post by Sara Stafford, the crew on Fishbone heard the radio call about the sinking boat and sprang into action.

“Got their coordinates, reeled in everything and 3100 horsepower full speed ahead went and realized how close we were,” she wrote.

“They lost the fight on a blue marlin, they lost their boat and their personal belongings and fishing gear, but we did save them! And their beer.”

Stafford shared video footage showing the crew of the Fishbone pulling the other anglers aboard their boat as the Knot Stressin sank deeper in the water.

Holy hell, wild video of a boat sinking on day 1 of the @whitemarlinopen

Quick thinking by another team here and it sounds like everyone made it out safely (via Sara Stafford on FB) pic.twitter.com/2cB0bI4kjA

She described the incident as “terrifying and wonderful all at the same time.”

“Big thanks to the Fishbone who helped save the day for some anglers who had to abandon ship today 60 miles offshore! the White Marlin Open wrote on Facebook.

“Everyone is safe and we are thankful for their kindness!”

It was unclear Tuesday what led to the sinking of Knot Stressin.

The Fishbone team was awarded an extra day of fishing as thanks for its heroic efforts, according to WBOC.

The White Marlin Open is an annual deep-sea fishing tournament that is in its 47th year of competition.

Prize money is awarded to anglers who catch white marlin, blue marlin, tuna, wahoo, dolphin and shark. Over $6 million in prize money was given out during the 2019 event.

Among those competing is NBA legend Michael Jordan on his boat, Catch 23.

For the third straight year, Michael Jordan is registered to compete in the White Marlin Open in Ocean City. https://t.co/FM2SheaE5a