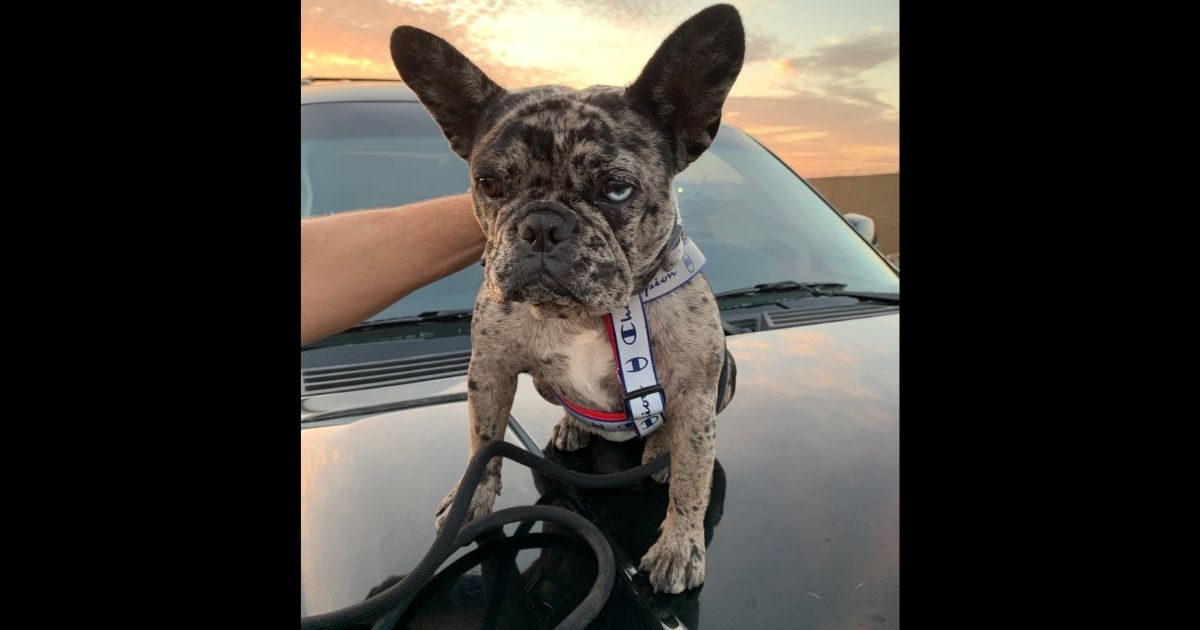 The following article, Dog Found After Suspects Force Way Into Hotel Room and Assault Owner Before Making Off with Pup: Police, was first published on Flag And Cross.

On June 29, two people staying at a hotel in San Francisco were the victims of a robbery, police say.

Three suspects allegedly broke into their hotel room. According to the South San Francisco Police Department, they then punched one of the victims “for several minutes … using a metal object to strike his head.”

The robbers allegedly made off with one of the victim’s phones and another costly item: Their Prada.

In this case, Prada was a French Bulldog, appropriately named, as the breed often fetches a high price. The robbers were likely counting on this, hoping to sell the dog and make bank.

Detective Ricky Amador also knew that, and last week, he arranged to meet the sellers of a dog that looked just like Prada under the guise of buying the pup.

“Around 8:10 pm, Detectives and Neighborhood Response Team Officers located and safely arrested all three suspects and recovered ‘Prada,’ who was in good health and reunited with her owner,” the SSFPD posted on its Facebook page.

“The suspects were booked into the San Mateo County Jail for robbery, assault with a deadly weapon, and conspiracy.

“Outstanding investigative work Detective Amador! The efforts of Detective Amador and the Neighborhood Response Team not only removed three dangerous individuals from the streets, but reunited Prada with her family.”

The three 20-year-old suspects lived in San Francisco, Daly City and Pinole — but thanks to the detective and his team’s work, police managed to capture all three of them.

The police department shared a photo of the French Bulldog, and many commented on the dog’s less-than-enthusiastic expression, joking that the pup didn’t look very excited to be rescued. But if you’d been through what Prada had been through, you probably wouldn’t be laughing either.

French Bulldogs are often the targets of robberies and thefts, as they’re popular, small and easy to transport, and are often sold for thousands of dollars.

“They are very lovable and very, very sweet and for a bulldog, they are pretty low maintenance when it comes to that breed,” Morgan Littlebear with the Humane Society of Tulsa, Oklahoma, told KJRH-TV after a suspected string of French bulldog-nappings earlier this year.

“They are really high trafficked because they are such a popular breed,” she said. “People can take them from somebody’s yard and sell them for lots of money and breeders charge that much so they can get them and turn them around just the same.”

Even celebrities aren’t immune from dognapping. Earlier this year, Lady Gaga’s dog walker was attacked and two of her three French Bulldogs were stolen.

The two were eventually returned, but many other dog owners don’t see their pups again. Littlebear strongly suggests being careful what you post about your Frenchie on social media and — of course — getting your dog microchipped so your dog can make it back to you if it does turn up somewhere.

Continue reading: Dog Found After Suspects Force Way Into Hotel Room and Assault Owner Before Making Off with Pup: Police ...