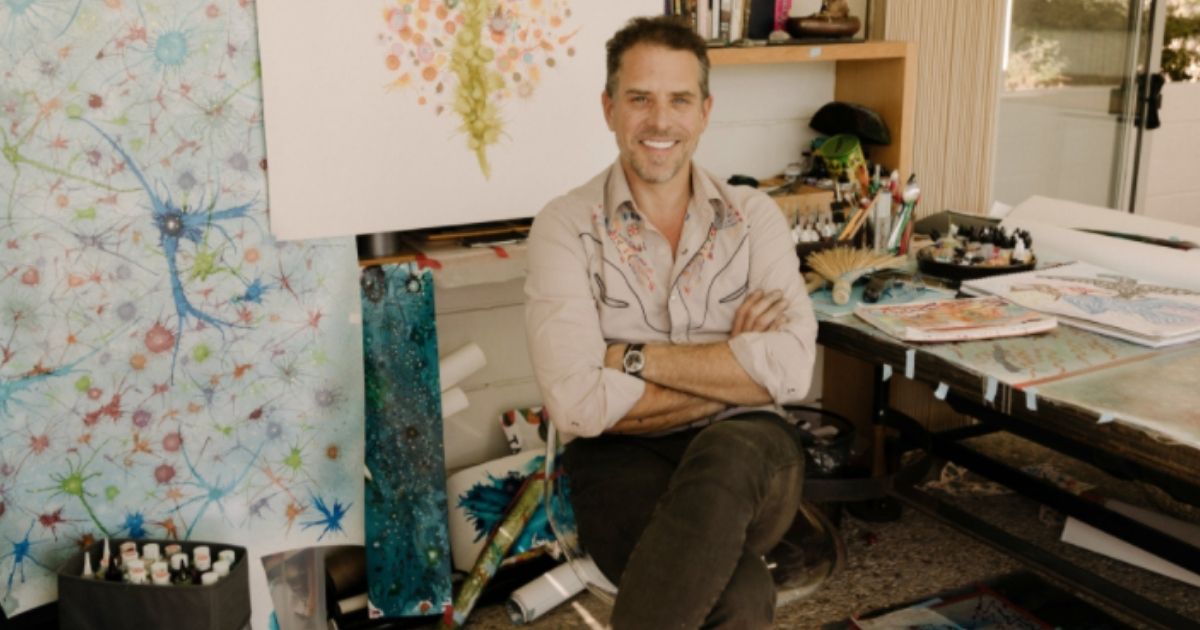 The following article, Hunter Biden Boasts of Being Courageous Because of His Schoolkid-Style Art, was first published on Flag And Cross.

Can selling influence be passed off as performance art? Asking for a Biden. Hunter, specifically.

Last spring, in a New York Times puff piece, Hunter Biden seemed to formally renounce the life he had known. No longer was he going to be the Beltway’s most notorious failson, occupying space on corporate boards and making business deals he had neither the experience nor the aptitude to handle. He was done with pills, powders and alcoholic potions. So long, strip clubs. So long, contested paternity tests. So long, debauchery.

Hunter had decamped to the Los Angeles area — which, as anyone will tell you, is the place to go if you want to avoid vice — with his new wife and his new occupation: amateur painting.

“For years I wouldn’t call myself an artist,” he told the Times’ Adam Popescu. “Now I feel comfortable saying it.”

Here’s how Popescu described Hunter’s artistic process: “Buried in layers of ink were twisting faces and organs, warm yellows to melancholy blues and angry reds — morphing shapes within shapes. He said it can take 14 layers of alcohol ink for the material to adhere to the nearly indestructible Japanese Yupo paper he uses as his canvasses. He blows the ink with a metal straw — it is fast-drying and ‘has a natural progression, and you have to be really focused in order to be able to alter it to your own imagination,’ he said.”

Hunter Biden might have finally felt comfortable calling himself an artist, but he was one of the few. Popescu’s piece was originally published on Feb. 28, 2020, and, while it was an object lesson in the absurd lengths The New York Times has gone to pretend Burisma presents no ethical impediment to anyone, it was good to see Hunter making news for blowing ink through a metal straw as opposed to inhaling stuff through it. His formless art was harmless enough — and it wasn’t like anyone was going to pay serious money to buy it, right?

Fast forward 17 months and Hunter, apparently still an influence peddler extraordinaire, is about to put this rubbish on the market for up to half a million dollars, because of course he is. Don’t fret, though. To avoid any appearance of impropriety, the White House announced earlier this month what it called a carefully crafted ethical firewall: The buyer would remain anonymous, not just to the public but to Hunter Biden.

Oh wait — resume fretting: A spokeswoman for Hunter’s art gallery promptly torpedoed any pretext that this flimsy arrangement would hold, telling reporters that Hunter was “looking forward” to meeting the people who would be buying his wares.

Amid the controversy surrounding the upcoming sale, Hunter went on an art podcast published Thursday to address his critics, clear the air and offer a thoughtful rebuttal.

In his appearance on “Nota Bene: This Week in the Art World,” Hunter gave the rhetorical finger to anyone who questions why his finger-paintings should be worth up to half a million dollars, saluted himself for having the “courage” to sell his art for outrageous prices despite misgivings in conservative media and defended the pricing of his Yupo-paper ink-blotted morphing shapes (or whatever), arguing art prices are “completely subjective.”

According to CBS News, the fun began when the hosts lobbed Hunter this softball: “You seem to have good spirits around the crazed narrative around your paintings. How do you — what’s the response to the people who are coming after the prices of the work, the collectors, what is your response to that?”

I’m not sure there was a right answer to that question, charitably though it may have been framed. Of the panoply of wrong answers he could have chosen, however, that may have been one of the wrongest. A quick bout of brainstorming came up with only one potentially worse response: “So what if the Iranians have good taste in art?”

If it didn’t get worse from there, it wasn’t from lack of trying. Hunter explained away the price tags on his paintings — $75,000 to $500,000 — by noting the gallery fixed the list prices and that art’s value as a commodity was “completely subjective.”

“Look man, I never set my prices  — what my art was going to cost, what it costs, or how much it would be priced at. I would be amazed you know if my art had sold at, um you know, for $10,” Hunter said.

“Just because the first time you ever go about it — just the idea that someone is attracted to your art, let alone they would pay something for it. You guys know this 1,000 times better than I’ll ever know it you know but an — I do know enough the value of an artist’s work is not necessarily determined by the price but the price is completely subjective — [inaudible] — and sometimes it has nothing to do with anything other than, you know, the moment.”

The first half of that answer is painfully disingenuous; if Hunter wanted to sell it for $10, not a single barrier prevents him from doing so. Instead, he entered into a partnership — under no duress — with the Georges Bergès Gallery, a New York establishment not known for letting original pieces of artwork go out the door for a crisp Alexander Hamilton.

Furthermore, if he (not wrongly) was under the impression his work’s intrinsic worth was in the low two digits, he could make a reasonable assumption about why someone would pay up to $500,000 for it. Coincidentally, it’d be the same assumption he could reasonably make about why someone would want him on the board of Burisma, a massive Ukrainian energy concern, when he had minimal experience in the energy sector or the Eastern European market.

Finally, Biden talked about how he had the “courage” to take his art public, including to the “entire viewing audience of Fox News, OAN and Newsmax.”

“I think I am the most famous artist in the MAGA world,” Biden said.

Yeah, because us MAGA types all think Andy Warhol is the guy who designed the soup can for Campbell’s and that impressionism is what Dana Carvey does. Note to Hunter Biden: If those paintings are the best you can do, I wouldn’t be so smug and elitist about conservative artistic chops, dude.

But then again, if this were anyone else, you could make the case the paintings aren’t the real art here. Instead, this is a form of performance art — a lifelong influence-peddler taking up Yupo-paper straw-blowing, selling the execrable results for a cool half-a-mil and pretending there are no ethical concerns to see here. It’d be a brilliant meta-artistic neo-situationist comment about how easily influence can be purchased in roundabout ways.

However, I don’t think I’m being presumptuous when I say Hunter isn’t that smart — and the White House isn’t adept enough to save him from himself yet again.

As for Hunter’s artistic “courage,” if it’s courageous to risk damage to your father’s career for the umpteenth time to make a quick buck, especially now that your father is the most powerful man in the free world, then yes — Hunter is a profile in that particular human quality.

For the sake of the GOP’s midterm chances, I beseech you, Hunter: Please continue being courageous. America needs you and your junk artwork now more than ever.

Continue reading: Hunter Biden Boasts of Being Courageous Because of His Schoolkid-Style Art ...

Dear God….is this what passes for “ART”? If this is “art”, then my son’s kindergarten refrigerator paintings are masterpieces. Jackson Pollock he is not.