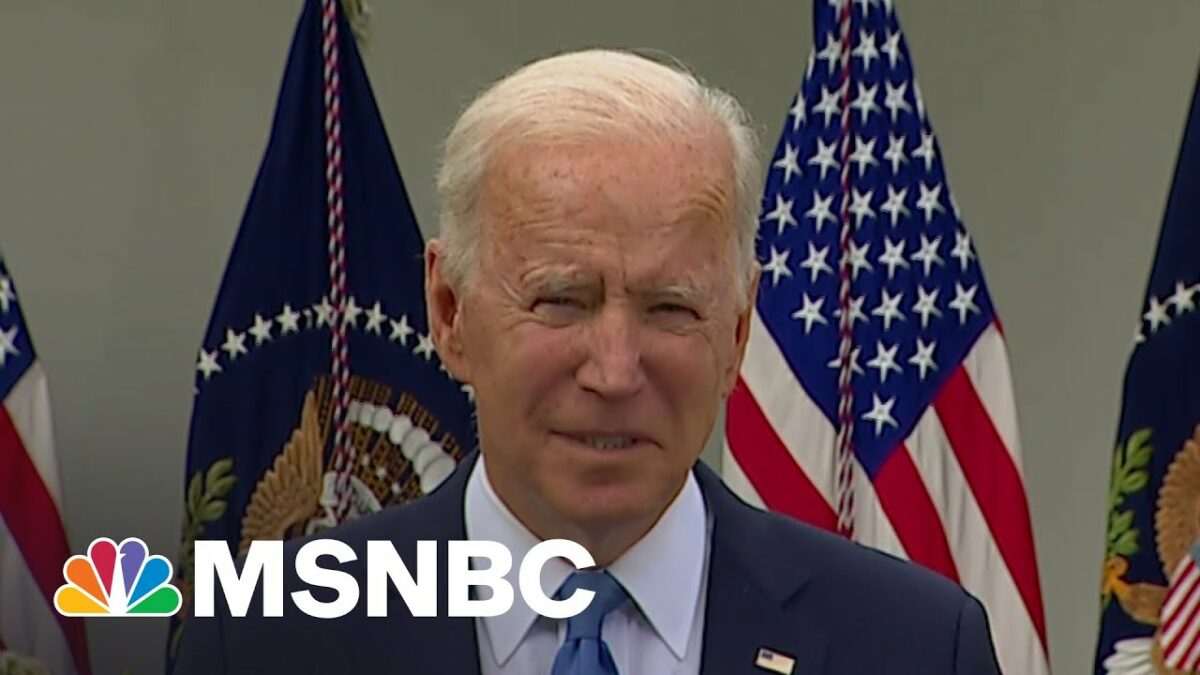 The following article, Biden Lashes Out at Reporter After Question About Inconsistent Vaccine Rhetoric, was first published on Flag And Cross.

For the second time in a week, President Joe Biden snapped at a reporter asking a question concerning COVID-19 vaccination and face mask policies.

On Thursday, Biden became visibly angry with Fox News White House correspondent Peter Doocy when the reporter asked about the administration’s reversal on the need to wear masks if one is fully vaccinated.

Doocy reminded the president that he previously stated, “If you are fully vaccinated, you no longer need to wear a mask.”

Biden, however, seemingly mistook the question to be regarding his remarks made that day.

“No I didn’t say that,” Biden told the reporter. “I said if you’re fully vaccinated in an area where you do not have — well, let me clarify that…”

Doocy, seeing that the president misunderstood the question, interjected, “In May, you made it sound like a vaccine was the ticket to losing the masks forever.”

“That was true at the time!” an agitated Biden fired back.

“Because I thought there were people who were going to understand that getting vaccinated made a gigantic difference,” he added. “What happened was, a new variant came along, they didn’t get vaccinated, it was spread more rapidly and people — more people were getting sick. That’s the difference.”

Folks, if you’re fully vaccinated — you no longer need to wear a mask.

If you’re not vaccinated yet — go to https://t.co/4MYpWqXVVo to find a shot, and mask up until you’re fully vaccinated. pic.twitter.com/qcyG2WyCG2

So Biden blamed the Delta variant and unvaccinated Americans for the change in policy.

Actually, 163 million people in the U.S. have received the vaccine, and tens of millions have recovered from COVID, have natural immunity and likely do not need the vaccine, based on a Cleveland Clinic study released in June.

During the briefing in which Doocy asked his question, Biden announced that all federal workers and contractors would be required to get a COVID vaccine or wear a mask on the job and submit to weekly testing.

On Monday, the president became testy with NBC News White House correspondent Kelly O’Donnell when she asked him about a then-anticipated announcement that Department of Veterans Affairs employees would be required to take the vaccine.

“You are such a pain in the neck, but I’m going to answer your question because we’ve known each other so long,” Biden said, noting it had nothing to do with Iraq. He was meeting with Iraqi Prime Minister Mustafa Al-Kadhimi at the time.

NEW:The president called me a “pain in the neck” (with a smile) as I pressed him on a NEW mandate for doctors at @DeptVetAffairs hospitals to get the COVID vaccine. He did not respond when I pressed if there would be further federal required vaccines. pic.twitter.com/PAnOv7aXPK

O’Donnell replied, “I take that as a compliment, Mr. President,” which brought a smile to the president’s face.

“Yes, Veteran Affairs is going to, in fact, require that all doctors working in their facilities are going to have to be vaccinated,” he answered.

O’Donnell noted in a tweet afterward that Biden did not answer her question about whether the vaccine mandate would be extended in the future to include other federal employees, which of course turned out to be the case.

“Why are you so confident [Putin] will change his behavior, Mr. President?” Collins asked Biden as he was leaving a brief news conference.

Biden, clearly angry, turned toward Collins and said, “I’m not confident — what the hell? What do you do all the time? When did I say I was confident? I said … what I said was — let’s get it straight — I said what will change their behavior is if the rest of the world reacts to them and it diminishes their standing in the world. I’m not confident of anything. I’m just stating the facts.”

Collins continued, “But given his past behavior has not changed, and in that press conference after sitting down with you for several hours, he denied any involvement in cyberattacks, he downplayed human rights abuses, he even refused to say Alexei Navalny’s name. So how does that account to a constructive meeting, as President Putin put it?”

Biden did not respond directly, but chose an ad hominem attack instead, saying, “If you don’t understand that, you’re in the wrong business.”

He apologized later in the day before boarding Air Force One to fly back to the U.S., saying he shouldn’t have given the “wise guy” response he did.

The old saying, “If you can’t stand the heat, get out of the kitchen,” applies to all these instances.

The reporters asked very reasonable, legitimate questions, particularly when compared to the outlandish ones Trump used to receive about Russia, Ukraine, Stormy Daniels and the like.

Biden’s responsibility to the American public is to answer them, particularly when the subject matter is COVID policy, which has had so much impact on our daily lives over the last many months.

Continue reading: Biden Lashes Out at Reporter After Question About Inconsistent Vaccine Rhetoric ...