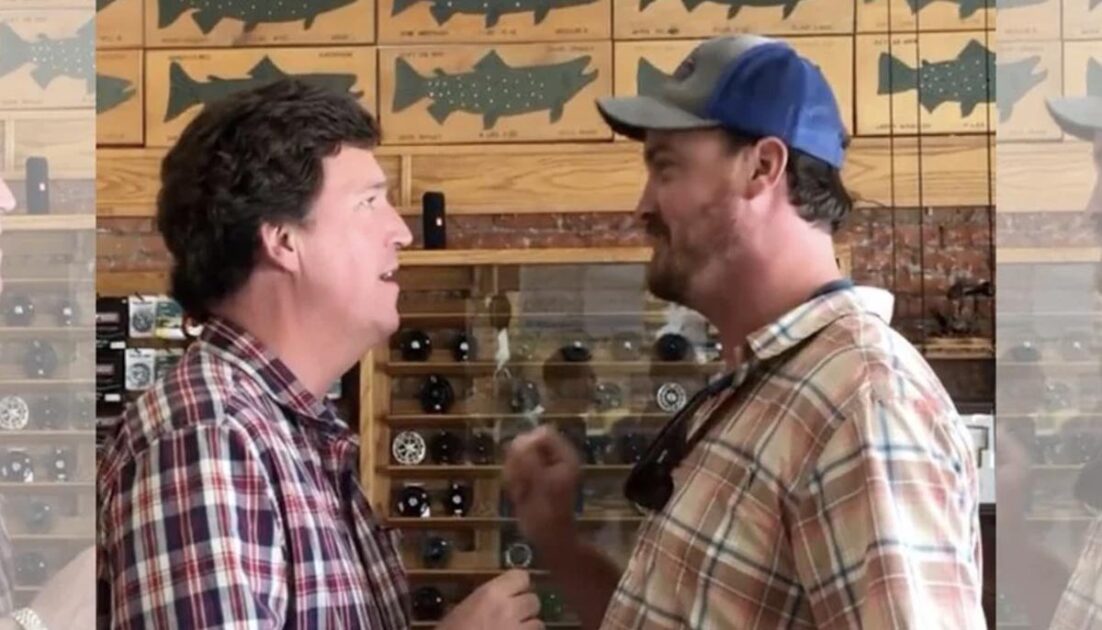 The following article, You Will Never Guess Who Came to the Support of Tucker Carlson Over Fishing Shop Attack, was first published on Flag And Cross.

You may have heard of the left-wing activist who set a trap for Tucker Carlson last week, but you’ll never guess who came to Tucker’s defense this week.

Carlson was accosted by a left-wing activist named Dan Bailey who lay in wait for him at a Montana fishing and bait shop. Bailey confronted Carlson and condemned him a the “worst human being known to man.”

Naturally, the activist had someone on hand to make video of the “spontaneous” meeting. The ambushing activist claimed that Tucker was pushing lies about the vaccine.

“It’s not everyday you get to tell someone they are the worst person in the world and really mean it! What an a**hole! This man has killed more people with vaccine misinformation, he has supported extreme racism, he is a fascist and does more to rip this country apart than anyone that calls themselves an American,” Bailey wrote.

But after this, you may be shocked at who came to Tucker’s defense.

Lemon didn’t come to Tucker’s defense because he likes Tucker or agrees with anything he says or does. No, Lemon came to Tucker’s defense out of sheer decency. Lemon said that people need to respect the “personal space” of celebrities when they are out in public and tat people have no right to just come up and attack someone just because they see them on TV.

“Let me tell you this,” Lemon said. “I don’t like it. I don’t like it when people do that because I would not want it to happen to me. I have mixed emotions because Tucker has done this to people before. Tucker said some really nasty things about me, and the next day there’s paparazzi in front of my house hiding, taking pictures. … We’re all on TV, we’ve been approached. We hear good things, we hear bad things from people. We don’t even know who they are; it’s part of the gig. Don’t you think this went a little too far though?”

Lemon went on to tell his panel that he thinks they all deserve privacy.

“I don’t think that should happen to [CNN anchor] Chris [Cuomo]. I don’t think it should happen to me. … Your First Amendment right doesn’t mean invading my personal space, I’m sorry, Ana. I understand what you’re saying and I get it. I think what Tucker says much, much of the time if completely reprehensible and divorced from reality, but he has a right to be in a space and not be accosted and not be ambushed by anyone,” he said.

Wow, someone on the left actually speaking up for common human consideration!

Continue reading: You Will Never Guess Who Came to the Support of Tucker Carlson Over Fishing Shop Attack ...