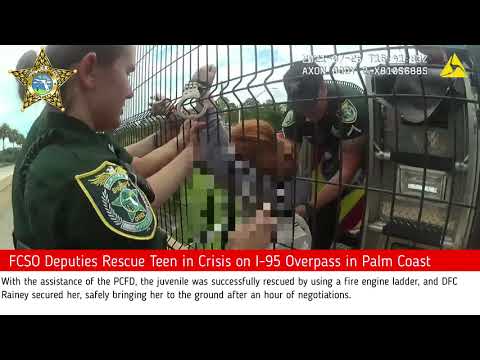 The following article, Deputies Talked Teen Down Off of Bridge Once, Now 'Implore' Intervention After Second Suicide Attempt, was first published on Flag And Cross.

Just a little over a month ago, on June 20, calls came in about a 17-year-old girl who was hanging on the outside of a bridge located at Palm Coast Parkway and Interstate 95 in Flagler County, Florida.

Flagler sheriff’s deputies arrived and discovered the girl doesn’t like men, so Deputy Crista Rainey was able to keep her talking. Deputy Laura Jenkins was also present and was able to grab the girl’s hand through the fencing and handcuff her to the wire just as she seemed to be making a jump.

Traffic was stopped, a fire truck ladder was used to reach the teen and the girl was taken to Halifax Medical Center under the state’s Baker Act.

On July 26, the same teen was spotted again hanging onto the outside railing on the I-95 overpass.

“Earlier this afternoon, the FCSO responded to a call for service about a juvenile who was having a mental health crisis and attempting to jump from the I-95 overpass in Palm Coast, FL,” the Flagler County Sheriff’s Office posted on its Facebook page.

“With the assistance of the Palm Coast Fire Department and the Florida Highway Patrol, FCSO was able to shut down all lanes of I-95 and the juvenile was rescued from the bridge and brought back to the ground safely. The juvenile was then transported by rescue for further medical evaluation.”

First responders arrived to find it was the same teen as before, and once again Rainey helped keep her talking.

“Myself along with three civilians were attempting to get her down,” another sheriff’s deputy said, according to Flagler Live. “I advised the two male civilians to stand back as the female does not like males. I asked the female civilian, to talk to the female while I stood by for a chance to grab her arms through the fence.

“As the female placed her left arms close to the fence. I was able to slip my arms through the holes in the fence securing her arm, then helped secure the other arm while I waited for a second unit.”

Video of the second incident shows the female deputies attempting to keep the teen present as she resists and cries out. Once retrieved from the overpass, she was restrained and taken, again, to the Halifax Medical Center and hospitalized under the Baker Act.

While some viewers are suspicious of the teen’s motives, claiming she’s just looking for attention, it’s clear she needs help she hasn’t been getting.

“I implore the Department of Children and Families to intervene quickly and get this juvenile the help she needs before it is too late,” Sheriff Rick Staly said, according to an update from the FCSO.

“She is crying-out for help and I am fearful that one time she will be successful. The quick response and combined efforts of FCSO deputies, Crisis Negotiations, Communications Center, Fire Rescue saved a life today.

“I hope that she gets the help she desperately needs.”