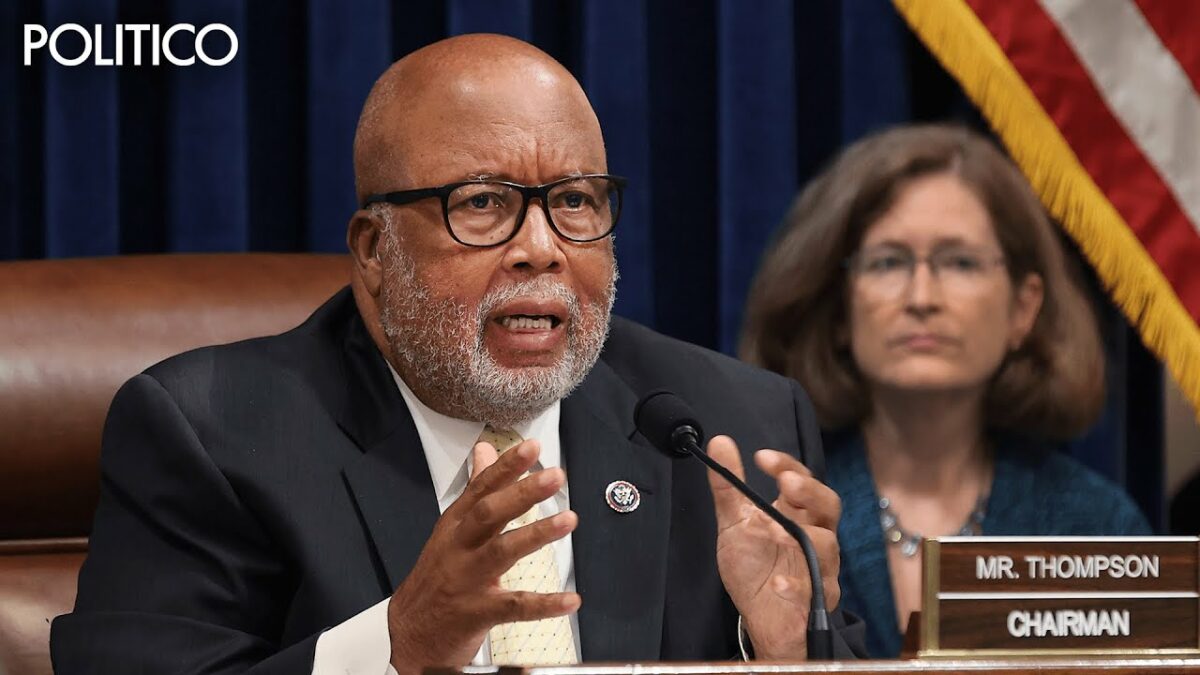 House Select Committee Chairman Rep. Bennie Thompson of Mississippi kicked off the first hearing on the Jan. 6 Capitol incursion by delivering a highly partisan version of events and presenting a highly edited video with one purpose in mind:

To destroy former President Donald Trump and his supporters.

But one Republican representative — who was blocked from joining the committee by House Speaker Nancy Pelosi — had the perfect answer.

Thompson’s opening statement and the video can be viewed below. In an obvious effort to heighten the drama, he warned his colleagues of the graphic content and disturbing language the video contained.

“Let’s see the video, please,” he said, according to a Rev.com transcript. “But please be advised that it contains graphic images and strong language, which many may find disturbing.”

The unapologetic Rep. Jim Banks, who had been selected by House Minority Leader Kevin McCarthy to represent Republicans on the committee but was later booted by Pelosi, has a knack for cutting right to the heart of any matter.

Ingraham brought up the testimony of Officer Dunn, who she said had supported last year’s deadly and violent George Floyd riots in Kenosha, but felt very differently about this one.

Banks replied, “He obviously has very strong partisan feelings and you got to see that on full display today. Everything that you saw today was carefully scripted by Speaker Pelosi and her staff. Even the statements that these police officers read. You could tell, at times, they didn’t write the statements, they were merely reading them as they stumbled over some of the words that they weren’t familiar with …

“Obviously, the members of Congress who were selected to be in the room were picked – Republicans – including Liz Cheney and Adam Kinzinger. By the way, those two do not want Republicans to win back the majority next year. They want Democrats to remain in control and the American people should keep that in mind. …

“These two would rather Nancy Pelosi stay in charge and the radical Democrats advance their socialist agenda than Republicans winning back the majority to save our country. This was a political stunt by the Democrats. Clearly, the American people are not falling for it.”

Agreeing with Ingraham, Banks told her that last week he had called on Thompson to “bring the head of the Capitol Police union. I thought Democrats were pro-union. … He would have provided a different perspective than what these four police officers provided today.”

Cutting right to the core of the matter, Banks said, “He would have told the members of Congress … that on Jan. 6, they weren’t prepared for what was going to happen that day even though they had intelligence reports that were provided to the highest levels of the Capitol Police three weeks before Jan. 6 that something dangerous was going to happen.

“It would have been a whole different story if the leadership of the Capitol Police would have done their job,” Banks added.

Part of Dunn’s testimony — accusing Trump supporters of using racial epithets during the incursion — is below. Americans can expect to see it again, and video like it, as the liberal media continues its smears for future elections.

Ingraham said the real goal of the committee is clear.

“Democrats want to take Trump out – off the table before 2024. They impeached him twice. Maybe this is a third bite of the apple,” she said, summing up her interview with Banks. “This is a lot about Trump here. They didn’t think it was a real attempt to stop the government from ever working again. Like the fur-boy [the QAnon Shaman who wore the Viking hat] was gonna what? Come up against the U.S. military and take over the government? Do they really believe that, Congressman? Yes or no?”

Americans saw clips from the hearing on TV. We watched the teary testimonies of the twin “Adam” bombs, RINO Rep. Adam Kinzinger of Illinois, one of only two Republicans on the committee, and the repellent Rep. Adam Schiff of California.

Pelosi gave away the game when she rejected Banks and Rep. Jim Jordan, the fiery, intelligent, fast-talking Republican from Ohio, whose presence on the committee would likely have rendered this charade impossible.

We already know what Pelosi is hoping to achieve and how this “investigation” will end.

Democrats want to inflict enough damage on Trump to keep him from running for the presidency in 2024. Knowing they must first avoid a Republican takeover of the House in the 2022 midterms, now a little more than 15 months away, their shorter-term goal is to keep the national focus on the Jan. 6 incursion for as long as possible.

And in politics, a strong offense is a good defense. Pelosi is well aware of her own failure to safeguard the Capitol ahead of Jan. 6. Although intelligence warned of an attack, she failed to act, which makes her ultimately responsible. By pointing at Trump and his supporters, she is trying to deflect blame.

A lot can happen in 15 months in the political world, but the Democratic power grab over the past six months has stunned most independents and likely alienated some moderate members of their own party.

Democrats have underestimated the intelligence of the average American and I think they will find that out in 2022.

The left has hyped up the 6 January riot at the Capitol as an “insurrection” and the deadliest attack on America since the (misnamed) Civil War. Apparently they are incapable (or unwilling) to distinguish between a minor riot and a deadly attack. They have conveniently forgotten that a group of Puerto Rican nationalists attacked the United States Capitol on 1 March 1954. Four Puerto Rican nationalists wanting Puerto Rico’s independence from US rule shot 30 rounds from semi-automatic pistols from the Ladies’ Gallery (a balcony for visitors) of the House of Representatives chamber in the United States Capitol. Five representatives… Read more »