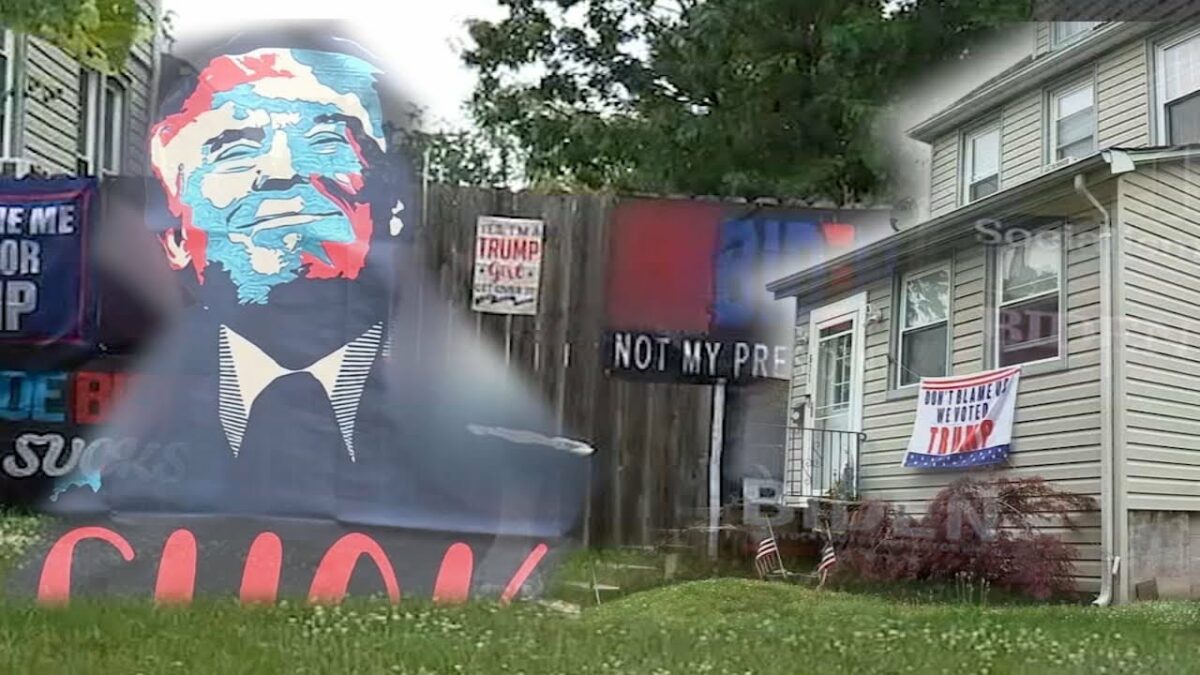 A New Jersey supporter of former President Donald Trump is thrilled after her town vacated its charges against her that sought to force her to remove signs protesting President Joe Biden with vulgar language.

“It’s a relief,” Roselle Park resident Andrea Dick told NJ.com on Tuesday. “My mother too, we both feel so relieved. I’m just happy this is all over.”

Dick lives with her mother, Patricia Dilascio, who owns the home.

Last week, a municipal judge ordered Dilascio to remove several anti-Biden signs from her property, including a few that contained language such as “F*** Biden: Not My President.”

The judge threatened to fine Dilascio $250 a day if she didn’t remove the anti-Biden signs within seven days. He claimed the signs violated a local ordinance against obscenity and noted that his removal order applied only to the banners with the F-word.

Joseph Signorello, the Democratic mayor of Roselle Park, told NJ.com he wanted the signs removed because he was worried that children in the neighborhood might see the obscene language on some of them.

Just when things looked grim for Dilascio and her daughter, the ACLU’s New Jersey chapter intervened on their behalf, saying the mother-daughter duo had the First Amendment right to exercise free speech.

This is shocking because the ACLU — which was once a fierce advocate for civil liberties — in recent years has devolved into a left-wing activist group that supports censorship of right-leaning viewpoints.

However, in this instance, the organization stayed true to its original mission to protect free speech — including that from those with whom it disagrees.

WARNING: The following tweet contains vulgar language that some readers may find offensive.

VICTORY! The court dismissed charges for our client who was criminalized for displaying “Fuck Biden” signs outside her home.

The town asked the court to dismiss the case and accepted what we’ve been saying all along: it’s your right to express dissent, even with strong language. pic.twitter.com/MW47Og7DgU

“The First Amendment exists specifically to make sure people can express strong opinions on political issues — or any other matter — without fear of punishment by the government,” Sinha said in a statement.

“Today’s decision confirms that our position was correct: Roselle Park had no grounds to issue fines for a political sign and the town’s use of its obscenity ordinance infringed upon fundamental rights protected by the First Amendment. It was an uncomplicated case.”

He added: “Today’s decision is a victory for our client and for all New Jerseyans who have the right to express themselves freely under the First Amendment.”

This development provides a glimmer of hope for conservatives, who are increasingly concerned about the left’s mounting campaign to censor and silence Trump supporters and other Republicans.

For example, Chicago’s Democratic Mayor Lori Lightfoot said she’s “unapologetic” about openly discriminating against white journalists (whom she uses as a proxy for conservatives), saying she “would absolutely” do it again.

In May, Lightfoot announced that she would grant interviews only to “black and brown journalists” because she was annoyed by the “overwhelming whiteness” of Chicago media outlets.

Government watchdog Judicial Watch and the Daily Caller reacted by filing a federal lawsuit against Lightfoot, accusing her of infringing the First Amendment and 14th Amendment rights of a white reporter who had requested an interview with her.

It’s unclear where any of this will go, but it’s encouraging that conservatives are no longer taking left-wing abuse lying down and are instead starting to fight back.

Now they should counter sue for the aggravation the maywhore caused. Just enough to bankrupt the city.