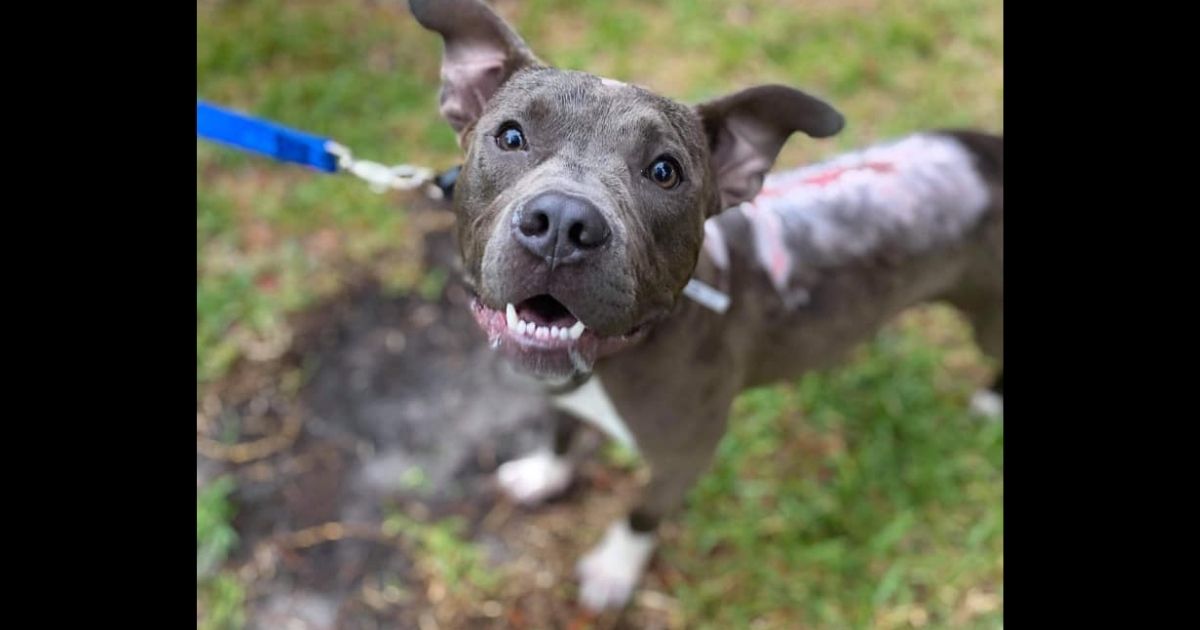 The following article, Dog Finally Finds Loving Family After Suffering Chemical Burns and Being Thrown from a Truck, was first published on Flag And Cross.

Beanz has had a rough first few months of life. The details of his past are not known, but his body bears marks that tell a sad tale.

The 8-month-old pit bull mix came to The Pittie Party of Central Florida in June after he’d been taken to a local veterinarian. The person who brought him in said he’d been thrown from a truck.

“She said that a dog was brought to their facility, and it was in a bad shape, he was burned, and he was thrown out of a vehicle,” Mayson Jones, the rescue’s assistant director, told WOFL-TV.

Beanz’s back was riddled with both road rash and what appeared to be third-degree chemical burns, and he had to stay at the vet’s for over a week while his wounds were taken care of.

Even once he made it to the rescue and a foster, his back had to be carefully tended to. He wore lots of shirts and doggie pajamas to keep him from worrying about the tender spots.

Beanz hasn’t let the cruel treatment he received affect his joy for life or his love of people. His foster family told WOFL in June that he was recovering well and is a lovebug.

“He follows me around all the time,” Isaac Robertson, 11, said. “Beanz, usually I play tug-of-war with him with his toys, and when we’re not, I sit down and watch a movie with him.”

“I like how when you lay down, he doesn’t just like lay beside you,” 13-year-old Nariya Robertson added. “He comes up on top of you and tries to cuddle with you.”

By July, his foster family had made a concrete decision: They couldn’t let Beanz out of their lives.

Plenty of applications had come in and many people showed interest in giving Beanz a wonderful second chance at life, but the foster family got the first choice, and they chose Beanz.

“Beanz’s foster decided today that they would like to adopt him,” the rescue told WOFL on Monday.

“Beanz wants everyone to know he is officially living his BEST LIFE!” the rescue shared on July 17, along with photos of Beanz thoroughly enjoying some pool time.

“A few weeks ago he was known to most of you as our little burn baby… but now he is the happiest boy alive and loves to swim in the pool! He loves relaxing on a floatie… or on top of his foster mama.

“We love this goofy pup!!! Hope you all have a fantastic Saturday.”

The news has warmed readers’ hearts, but no one is as happy about the news as Beanz and his new forever family.