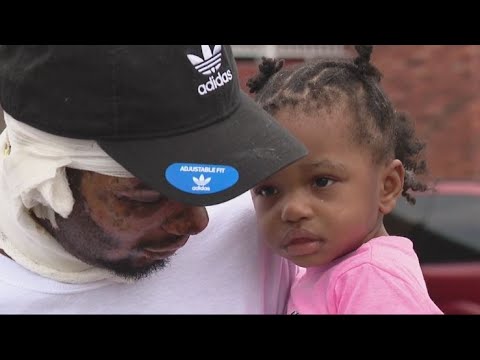 The following article, Dad Severely Burned and Temporarily Blind After Saving 18-Month-Old Twins from House Fire: 'I Had to Get My Babies Out', was first published on Flag And Cross.

Flood and fire both visited Ray Lucas’ family last week in the Detroit suburb of Eastpointe, Michigan, but thanks to Lucas’ bravery and love for his two little girls, neither disaster claimed any lives.

On Friday, there was flooding in the house inhabited by Lucas; his girlfriend, ShiAnn Brown; their twin daughters, Milan and Malaysia; Lucas’ niece; and his mother.

There wasn’t enough damage to keep them out, but disaster struck much harder the next day.

Lucas and Brown had run to the gas station and were gone for about 15 minutes. When they returned, they immediately knew something was wrong.

“The house was engulfed in smoke … I seen my mom and my niece were standing at the door and they was … frantic,” Lucas told WJBK-TV.

The 18-month-old twins were asleep in the basement room, where, according to a GoFundMe page for the family, an electrical fire had broken out. Visibility was severely limited, but Lucas had only one goal in mind.

“I, I just knew I had to get my babies out,” he said. “Like, that’s what went through my mind.

“You really couldn’t see your hand in front of your face … I really only found my babies just due to like, my memory, just knowing where they were and knowing how to get to them — just from having that same route.”

Brown later posted that she’d tried to run in to save her twins but had gotten disoriented and collapsed.

“Thank God Ray found a way just by his memory alone or my babies wouldn’t be here!” she wrote.

The determined father rescued both of his girls, though he and his daughters all needed medical attention. Milan was treated for second-degree burns and smoke inhalation, and Malaysia was treated for severe burns, both receiving care at the ICU at Children’s Hospital of Michigan in Detroit.

Lucas suffered severe injuries, which are keeping him from going back to work. His extremities had second- and third-degree burns, and he went blind for three days — but thankfully his sight was restored.

“I was temporarily blind for three days but they said it was a miracle that I could see,” he explained. “I’ve got burns on my arms … but for the most part, everybody is still here.”

The public has responded very positively to Lucas’ story of sacrifice, and the GoFundMe set up for the family had raised more than $260,000 as of Wednesday with a $40,000 goal. The family will need to replace all their earthly belongings, pay medical bills and figure out the job situation — but the donated funds will certainly help with those pursuits while the heroic father recovers.

“I just can’t thank him enough for saving my babies,” Brown posted on Saturday. “I’m just so grateful I can’t even put it into words.”

Continue reading: Dad Severely Burned and Temporarily Blind After Saving 18-Month-Old Twins from House Fire: 'I Had to Get My Babies Out' ...