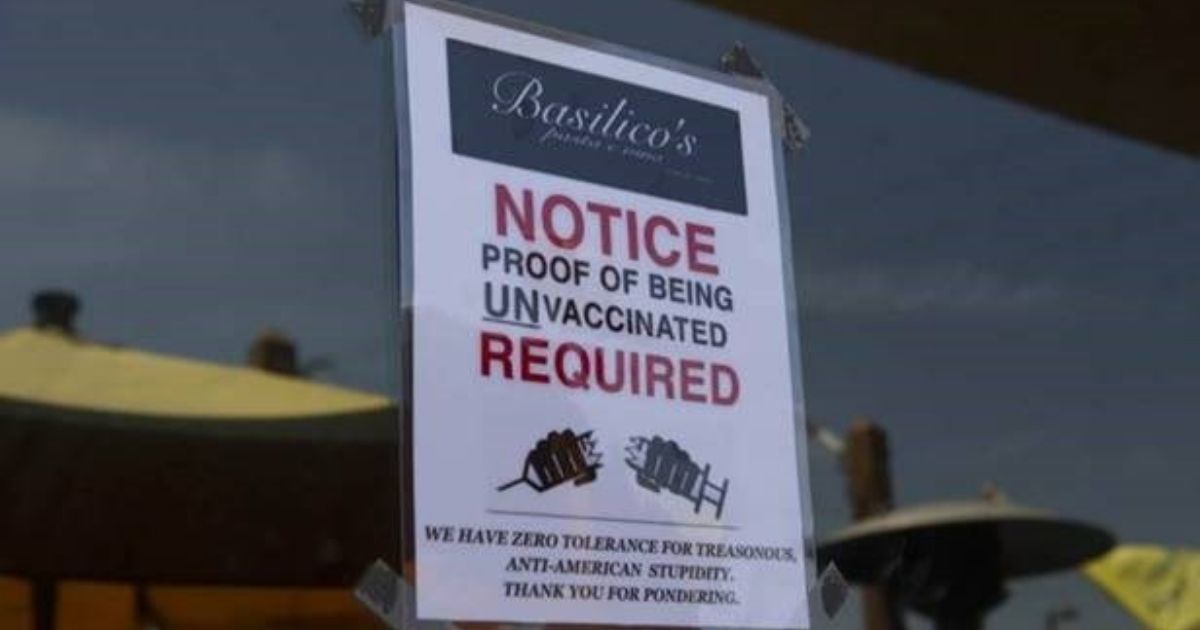 The following article, Restaurant Tapes Sign to Front Door: Proof of Being Unvaccinated Required for Entry, was first published on Flag And Cross.

A restaurant in Huntington Beach, California, is trolling the fascists so hard, leftist Twitter is about to blow a gasket.

As California businesses consider requiring proof of vaccination for entry, one rebellious eatery, Basilico’s Pasta e Vino, recently taped a sign to its door that reads “Proof of being unvaccinated required.”

Underneath this warning is an image of a broken syringe and the declaration, “We have zero tolerance for treasonous, anti-American stupidity. Thank you for pondering.”

Basilico’s has a history of thumbing its nose at California’s far-reaching coronavirus mandates. Last year, when the state shut down indoor dining, Basilico’s stayed open, the Los Angeles Times reported.

Later, when the state issued a mask mandate, Basilico’s declared itself a mask-free zone and required patrons to remove their face coverings.

The new sign is just the latest jab at the powers that be, and it is a hilarious one at that.

It is clearly a gag, as it is impossible to prove one is not vaccinated, and an employee confirmed to the dismayed Times that the restaurant is not, in fact, checking anyone’s vaccination status.

Of course, it was all too much for Twitter leftists, many of whom seem to be under the impression that the unvaccinated are keeling over and dying in the streets and that this novel inoculation is the only thing keeping the more enlightened Americans from doing so themselves.

This restaurant down the street from me in Huntington Beach is asking that diners show proof they have **not** been vaccinated. Partisan politics has broken so many brains. Get me off this ride. pic.twitter.com/GSFVqNMiEX

Good morning. Happy Tuesday.
ICYMI “proof of being UNvaccinated” is actually a death certificate. And dead people don’t eat at Basilico’s Huntington Beach or any restaurants.

MAGA cult weirdos idiocy is mind-boggling. This is beyond words. pic.twitter.com/jDBc968Xmr

Meanwhile, to the Times, the sign is a “powerful illustration of the backlash against vaccines in some quarters, despite overwhelming evidence they are safe and a strong protection.”

“Officials have been fighting to get more people vaccinated as COVID-19 infections rise but are facing skepticism, misinformation and political opposition from the right,” the outlet added.

Anyone else getting sick of the establishment media and government officials talking down to the unvaccinated?

First of all, it is highly disingenuous to equate skepticism with misinformation; without a healthy dose of the former, one would never be able to discern the latter.

And even if the vaccine is entirely safe and effective, who says anyone has the right to demand we inject something into our bodies against our will?

Whatever happened to personal autonomy, “my body, my choice,” self-governance — liberty?

It was this willful defiance of tyranny — including the tyranny of social intimidation — that led to the formation of our country, and it is still necessary to ensure we don’t fall prey to the rising totalitarianism invading public and private life.

Twitter leftists may look down their noses at the unvaccinated masses, but it’s not hard to imagine these same people snitching on their neighbors to Big Brother for the good of the nation.

Is it so difficult to see where this is heading?