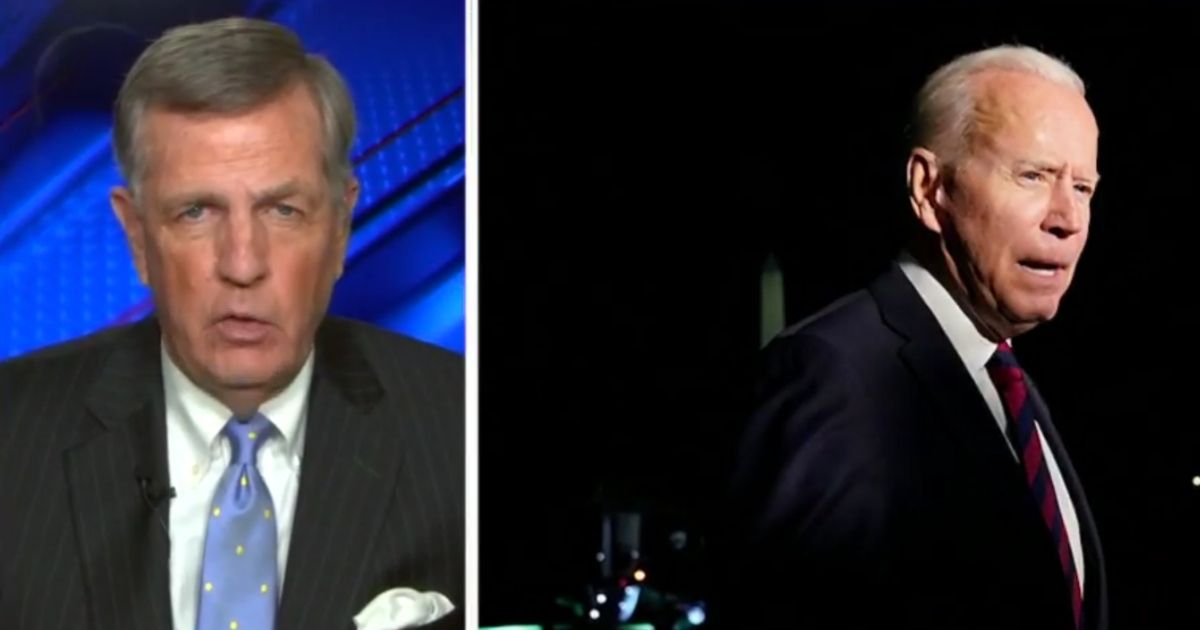 The following article, Fox's Brit Hume Alarmed by Biden's Mental State: He Is Showing Signs of 'Senility', was first published on Flag And Cross.

On Tuesday, Fox News senior political analyst Brit Hume expressed concern that the president of the United States is showing signs of senility which may be causing Americans to lose confidence in the future.

Hume was discussing recent polling with Fox News host Bret Baier which indicated Americans are feeling pessimistic about the future when he made his observation that President Joe Biden has been “showing signs of senility” which Americans probably find “alarming.”

Baier asked Hume about the president’s recent string of on-camera gaffes before showing clips of Biden completely losing his train of thought or snapping at a reporter about Republicans who think “we’re sucking the blood out of kids.”

“The president obviously receives some pretty good press overall from the media, but there have been a couple of answers recently at a town hall, also a reporter’s question where he’s kind of snapped at them or said something where people weren’t following it,” Baier said.

“The media didn’t make a big deal out of them, but made you scratch your head,” he added.

In one of the more cringe-worthy clips, Biden stammered through an answer to a question about when vaccines would be made available to children under the age of 12 during a CNN town hall last week.

“The question is whether or not we should be in a position where you are — why can’t the experts say we know that this virus is, in fact — is, is, is going to be — or, excuse me — we, we, we know why all the drugs approved are not temporarily approved, but permanently approved,” Biden said.

Hume explained this clip was a “pretty dramatic” example of Biden’s failing faculties.

The veteran newsman commented that “the man had obviously lost his train of thought and couldn’t recover it, and stammered around for a little while. These are signs of senility, which is a common thing in elderly people and Biden, like me, is certainly elderly.”

“But I think it’s becoming increasingly obvious that this is the case, and I can’t believe that people who see that, who are not already committed to him in one way or another or are committed against him, don’t look at that and find it alarming,” he continued.

“At a time when their worries are increasing and the polling is showing that pessimism in the country is increasing, they see the president of the United States losing his train of thought and unable to blurt out a coherent answer to a question,” Hume added.

“I think people find it disturbing and it makes them wonder about the future.”

Look. Brit Hume is hardly one of Fox News’ hyperbolic culture warriors, far from it.

He’s a strait-laced news commentator capable of triggering anyone with partisan views, right or left, with his pragmatic take on current events.

At this point, however, you’d have to be near-sycophantically devoted to supporting Biden to deny that there is clearly something up with the old man, and he’s having a really hard time.

Biden routinely crumbles under the high-pressure challenges of talking to the media, so how capable can he really be at actually running the country?

Let’s review just a random assortment of indications that Joe Biden is descending into senility:

While running for president, he frequently forgot where he was and was criticized for appearing to use a teleprompter during live television interviews.

After being sworn into office, he once forgot what the Pentagon was called, what the Secretary of Defense was called and the name of the person he appointed to head that “outfit over there,” as he called it, unable to draw to mind anything more concrete.

He broke a 100-year record for the longest a president has gone without giving a solo news briefing, and when the day finally came, he was equipped with notes and cards telling him who to call on (and also completely lost his train of thought and mixed up the names of foreign leaders during the media event).

He frequently gets angry — it’s not just the “Republicans think we suck the blood of kids” line. He’s snapped at voters and reporters alike, once threatening to fight a voter, once telling a reporter she was in the “wrong business” for asking him a mildly tough question (to draw on only two examples of such behavior).

Biden’s behavior corresponds troublingly with the Mayo Clinic’s warning signs of early-onset dementia, and this is far from the first time it has been addressed, although Baier is correct that it is rare the establishment media makes a very big deal over it.

Whether or not this is the case, Biden’s behavior is, objectively, a very big deal, and it’s disturbing to consider what might transpire if it continues to be ignored.