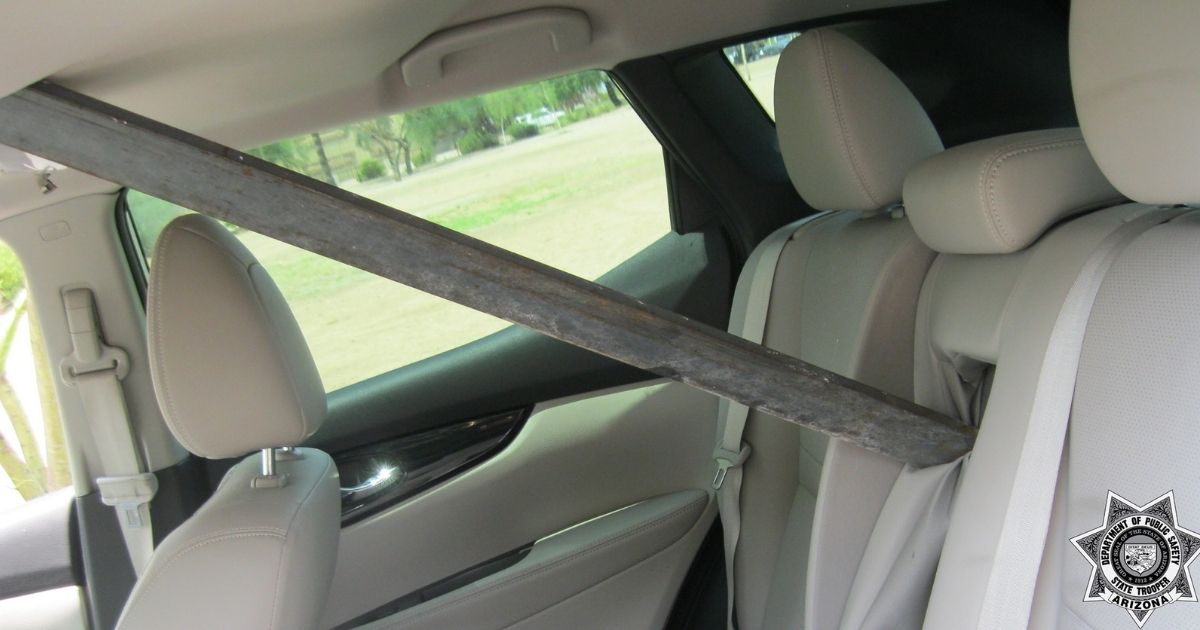 The following article, Woman Inches from Being Impaled When Metal Pole Flies Through Windshield on Highway, was first published on Flag And Cross.

Drivers face many potential hazards when hitting the road. No matter how experienced the driver or how reliable the car, there’s always the chance that someone else might make a life-altering decision for them.

That’s why police are now on the lookout for a white pickup truck that was hauling a trailer with an unsecured load Thursday in Phoenix.

Mandy Poff was driving alone in her Nissan SUV, traveling what she said was a safe distance behind the truck, when the truck hit a bump in the road and a 4-foot-long piece of metal fell off the back and immediately became a deadly projectile.

“It kind of bounced on the road and then flipped up and then just went straight through my windshield right by my face,” Poff told KSAZ-TV. “And then kind of went up and cut the front or the top of my car and lodged itself in my back seat.

A responding police officer was shocked to find the pole had missed the driver.

While Poff herself didn’t sustain any injuries, she’s having a hard time working with insurance because the other driver did not stop. She’s now trying to circulate the story as much as possible in hopes that someone might see something and say something.

“A driver who failed to properly secure their load nearly cost an innocent motorist her life yesterday,” the Arizona Department of Public Safety posted on Facebook on Friday.

“On Thursday, July 22nd, at about 11:53 a.m., a pickup truck hauling a trailer was traveling northbound on SR 51 in Phoenix. The truck hit a bump in the roadway near Thomas Road, causing a roughly four-foot-long iron pole to dislodge from the trailer and impale the windshield of the Nissan SUV directly behind it.

“The pole went through the center of the windshield and became lodged between the center back seat and the roof of the vehicle. Incredibly, the driver of the Nissan escaped without physical injuries.

“The driver of the truck did not stop and has not been located. Road debris poses a serious hazard to everyone on the road, from other motorists to the law enforcement and road maintenance crews that go out to retrieve it. No matter how short the drive or how heavy the items, please take the time to secure your load before every trip!”

Many have pointed out how fortunate it was that there were no children or car seats in the SUV during the accident, and others have suggested the future installation of a dashcam.

The incident has understandably left Poff shaken up and continues to give her nightmares.

“I can’t sleep,” she said. “I’m terrified to be in a car. It went right by my face. It was terrifying.

“I do a lot of driving. I can’t avoid freeways, and I’m not going to let this stop me. I love my job. It’s something I’m going to have to figure out how to work through, through therapy and time.”

Continue reading: Woman Inches from Being Impaled When Metal Pole Flies Through Windshield on Highway ...