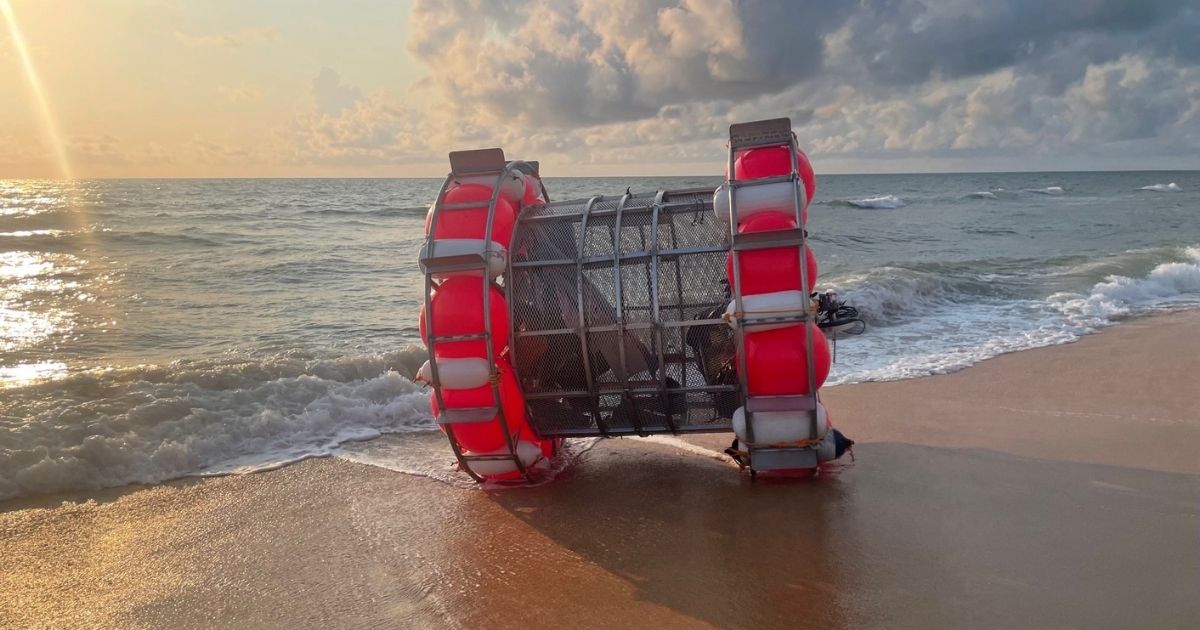 The following article, Man Trying to Walk on Water Washes Up on Beach in Bubble-Like Vessel, Police Say, was first published on Flag And Cross.

There are many people in this world who were content to stay home even before the pandemic. They enjoy the simple things in life, blooming where they’re planted and not seeking any risky adventures.

Reza Baluchi is not that kind of person.

Baluchi, an avid runner and refugee from Iran, has lofty goals that even the most proactive do-gooder might find staggering. His website says he has plans to run through every country in an effort to bring world peace and unity among people, and he’s made the trek from Los Angeles to New York on foot — twice.

People generally seem to find him endearing or irritating — but he certainly isn’t boring, and he uses many of his stunts to raise money for charity.

You may recognize his name and the style of his craft from past news blurbs, and you’d be right: This isn’t the first time Baluchi has been “rescued” from one of his missions. In both 2014 and 2016, his trademark “bubble” ship attempts were met with failure and swift rescue.

More recently, on Saturday, Baluchi encountered a series of unfortunate events after setting out from St. Augustine, Florida, heading for New York. He was supposed to have a boat following him for safety purposes, but according to the South Florida Sun-Sentinel, he said that didn’t pan out because of the weather.

But did that weather keep him from setting off in his giant inflatable hamster wheel? Nope.

After starting out on Friday in his newest “hydropod” that basically allows him to walk on water, he realized his navigation equipment and some of his safety equipment had gone missing. He then ended up being carried 30 miles south of his starting point and was washed ashore in Palm Coast.

“This morning, the #FCSO responded to a call about a vessel washing ashore in the Hammock area,” the Flagler County Sheriff’s Office posted on Saturday.

“Thank you to the concerned citizens who reported this. We are happy to announce that the occupant of the vessel is safe with no injuries!”

“UPDATE: The occupant advised he left the St. Augustine area yesterday to head to New York, but came across some complications that brought him back to shore. The US Coast Guard was contacted and arrived on scene to take over the case and ensure the vessel/occupant are USCG compliant for their safety moving forward.”

While the setback was certainly not what Baluchi had been hoping for, his goal remains clear and his determination doesn’t seem to have flagged at all.

“I will show people anything you want, do it. No listen to anybody. You chase your dream.”