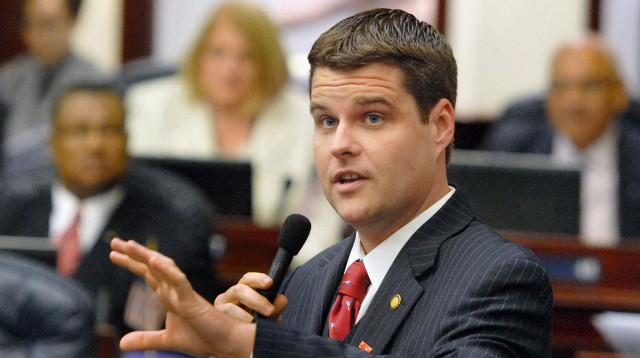 The following article, As If The Matt Gaetz Case Couldn’t Get Any Weirder…, was first published on Flag And Cross.

Florida Congressman Matt Gaetz has done something astounding during his brief career in politics:  Come up with a scandal so bizarre that Hollywood would have deemed a fictional re-telling of the tale “too unbelievable”.

The story so far, (which has been evolving in perpetuity), is that Gaetz and a friend had participated in the trafficking of underage girls for sex, (albeit unknowingly), and that this story came to light after Gaetz was unable to help an extortionist search for a long-missing FBI agent.

Or something thereabouts.  The accounts vary wildly in the case.

Now, as if things couldn’t get any stranger, a new angle has emerged in the case.

A sugar daddy website linked to the sex-trafficking investigation of Matt Gaetz publicly weighed in on the scandal, saying the lawmaker has never been registered on the site in search of young women.

The unusual move by the web site SeekingArrangement puts some distance between Gaetz and the accusation against him. The site had been caught up in the Gaetz case because it had reportedly been used by the GOP lawmaker and another key player in the case to connect with an underage girl for sex.

SeekingArrangement, which helps “sugar babies” connect online with men, released a statement because of yet another odd twist in the case: The former mistress of golfer Tiger Woods sued the website claiming it wrongfully terminated her contract as the company’s spokesperson. The plaintiff, Rachel Uchitel, said she was fired because SeekingArrangement was in damage control due to the investigation into Gaetz, which is unrelated to her lawsuit.

Gaetz has maintained his innocence throughout the ordeal, but a plea deal from one of his alleged accomplices has some wondering if the Sunshine State lawmaker isn’t in some serious trouble.

Continue reading: As If The Matt Gaetz Case Couldn’t Get Any Weirder… ...

This is just more lies and propaganda from the socialist progressive marxist democrat communists to assassinate Gaetz’s reputation. Just like they did Trump, Kavanaugh and others.

The deep state has developed a Technique that allows them to ruin innocent people by bankrupting them and Defaming them and leaving them no alternative but to plead guilty to Trumped up charges in order to make them stop! It has played out many times in their pursuit of Trump Loyalist and other enemies of the Deep State!