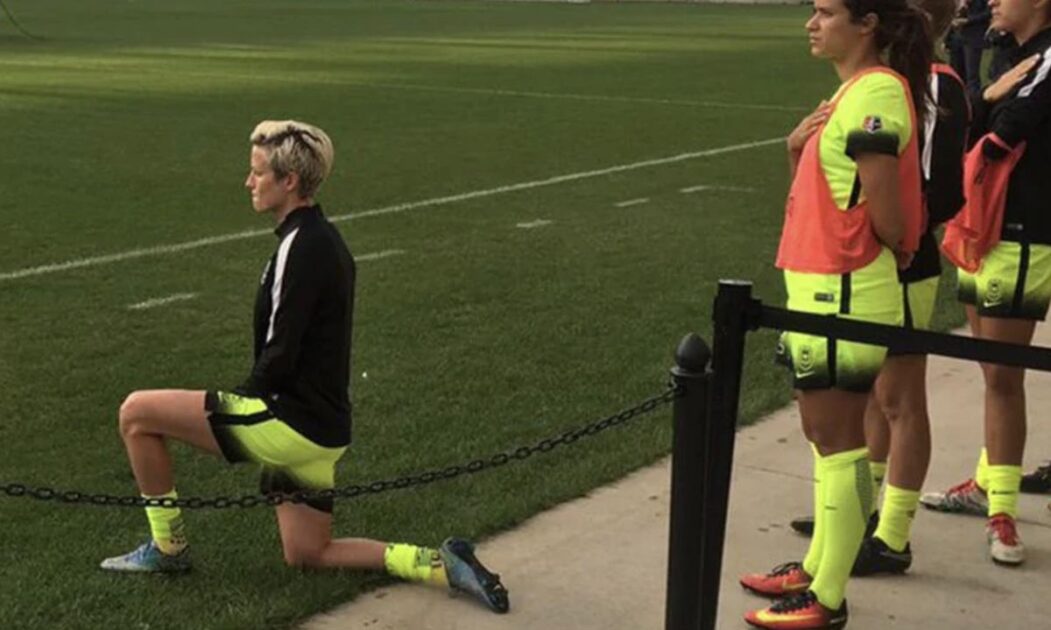 The following article, US Women’s Soccer Team Skips Representing U.S.A. at Opening Ceremony, was first published on Flag And Cross.

The famously anti-American soccer team claimed that they could not attend because they were scheduled to attend practice during the opening event, according to WXIA-TV.

“Obviously we can’t be there, I don’t know who scheduled us to practice at this time,” chief anti-American team star Megan Rapinoe told the media.

The women’s soccer team was all about protesting against the U.S.A. during its first Olympics game this week but lost to New Zealand in a crushing 3-0 final.

Rapinoe added that this year’s gams are different than past games.

Team members Abby Dahlkemper and Rapinoe enacted a lame “private parade” and posted it to Twitter:

The America-hating women’s soccer team was not the only American team that skipped the opening ceremonies.

Both the women’s and the men’s U.S. gymnastics teams also skipped the ceremonies.

They similarly held their own version of the parade”

Love it! Sam Mikulak gets flagbearer honors as the Women’s and Men’s gymnastics teams from the USA hold their own private Opening Ceremony, since they won’t be able to be in the Stadium tonight. #tokyo2020 #gymnastics #olympics

Hoping they lose every game they play.

Probably because they could not carry the LGBTQI flag, ungrateful pampered broads that they are!

They lost. Thank God! Worthless lesbians that they are.

When you openly disrespect the nation you are supposed to represent, there is no reason for the citizens of that nation to respect you.

Hoping they lose every game they play.. Ashamed of ‘our team’.

They don’t mind taking the US money that allows them to be there. Pull them out of the Olympics and bring them home on a garbage skow.

It’s only fitting that they choose not to represent us, because in reality, they don’t represent any of our Values or beliefs!

Don’t these women have enough sense to buy a plane ticket to whatever country they think is better than the U.S. I do not want them here if they can’t represent us proudly.