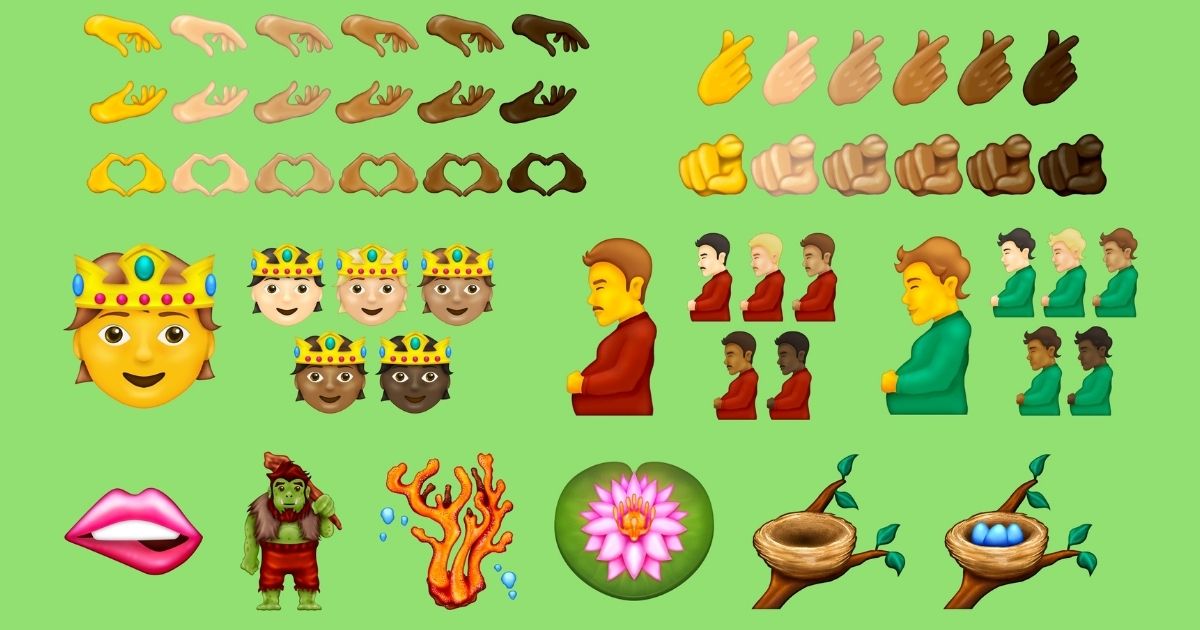 The following article, Unicode Consortium Releases List of Woke New Potential Emojis That Could Soon Appear on Kids' Phones, was first published on Flag And Cross.

And to think I once believed the low point for emojis had to be 2017’s “The Emoji Movie.”

In case you missed that tour de force of animated cinema, The Guardian’s Wendy Ide described it pretty accurately: “A strident palette of candy-colored empty calories and poop jokes and a cynical message about accepting yourself had me searching for an emoji showing a dispirited film critic hanging from a noose fashioned from a phone-charger cable.”

The film holds a 7 percent positive rating from critics on Rotten Tomatoes. A 2019 survey by Insider found 7 percent of Americans also believe that chemtrails are real, and 7 percent believe psychic readings are accurate. Draw your own conclusions.

Even then, one should have known that wasn’t the nadir. A year before the movie, back in 2016, Apple replaced the revolver emoji with a green squirt gun, because apparently your text messages were going to inspire gun deaths or something. Other companies followed suit.

At the time, conservatives assumed that was as woke as emoji politics could get. We didn’t even call it “woke” back then — we were still on “politically correct.” How naïve we were.

Fast forward to 2021 and you or your child will likely be able to use an emoji of a pregnant woman with a mustache who’s supposed to be a “man,” because why not?

My therapist: “Pregnant man with boobs emoji isn’t real, it can’t hurt you”

According to a blog post at Emojipedia, which chronicles all things emoji-related, the pregnant “man” is one of the draft candidates for Emoji 14.0, expected in late 2021 or early 2022.

“Pregnant Man and Pregnant Person are new, and recognize that pregnancy is possible for some transgender men and non-binary people. These are additions to the existing Pregnant Woman emoji,” Emojipedia’s Jeremy Burge wrote in a July 15 post.

“Person with Crown is a gender-inclusive alternative to the existing emojis for Princess and Prince.

“The above additions will mean that nearly all emojis can have default a gender neutral option, with choice to use a woman or man where relevant. A few exceptions remain, which are being reviewed, as per this Unicode Emoji Subcommittee report from 2020.”

Emoji 14.0 is to be finalized in September 2021. Here’s on the latest draft list https://t.co/IAahiILGA0 pic.twitter.com/1GPyHxZnWu

When do new emojis come out?

First half of 2022: When a majority of platforms will get new emojis, based dates from the previous release https://t.co/yemIEzDfKi pic.twitter.com/IhEPNlMmO6

Other proposed emojis include an interracial handshake, a low-battery emoji, a melting face, a — oh, who am I kidding? Nobody is going to look at anything other than the mustachioed pregnant “man” and the androgyprince.

This isn’t a new development; gender-neutral emojis began in 2017 — with Apple leading the way, according to The Daily Caller. What’s amazing is how fast we’ve come, though. In four short years, we’ve reached the point where you have to explain to your 11-year-old why Chef Boyardee is with child.

And to think we were nonplussed with the water gun.

Yes, there’s a farcical element to all of this. I wouldn’t be talking about “The Emoji Movie” if this were death-of-the-republic stuff. As plenty of people pointed out on Twitter, this emoji will be consigned to one major use case:

This pregnant man emoji will almost exclusively be used by dudes to imply they ate too much, or anytime they need to poop. pic.twitter.com/gOfpiS5KbY

the pregnant man emoji will be used .0001% of the time to describe a “pregnant trans man’ and 99.9999% by straight dudes talking about the huge burrito they just ate https://t.co/TFpkTpDnZ5

There’s a wider point to be made here about the ubiquity of Big Tech. The pregnant “man” emoji was birthed (forgive the pun) by the Unicode Consortium, a group that provides the universal character encoding that is, according to its website, “the basis for processing, storage and interchange of text data in any language in all modern software and information technology protocols.”

It either thought that a) there were enough men with mustaches getting pregnant that this was a necessary step or b) if there weren’t enough of them, there was a point to be made by including the emoji anyway.

You can guess which it probably is, especially given the fact they’ve chosen to include a gender-neutral prince/princess/whatever despite the fact there doesn’t seem to be one of those currently extant.

Think this will get pushback from Big Tech? If you’re reading this on a phone or a tablet, it’s almost certainly using an operating system made by Apple or Google. They’re the ones that made sure you couldn’t text a revolver. You can guess which way they’re going to go, too.

Thus, it’s not whether or not a pregnant “man” will appear on your family’s phones, it’s how you plan to react to it. You can shrug and accept it. You can scream into the void:

Newsflash @Apple, only women can get pregnant!

Biological Men CAN NOT have babies…… https://t.co/m3GHQJScBl

Or, you can use it after a big meal and try to recontextualize this into the farce it is.

And yet, every time you bring up the emoji keyboard, there it is: a little reminder that Big Tech monoliths control a goodly portion of what you can say and how you say it.

If you want to communicate with the rest of the world, part of the price is having their values splashed across your screen.

So, yes Virginia, it could and did go lower than “The Emoji Movie.”